In this magical game you take control of a dragon, "Thanatos the destroyer", whose eternal destiny lies in conflict with the forces of the underworld. The dragon which is very large and superbly animated, flies, walks, swims, and burns its way through the landscape. It must collect a beautiful young enchantress, "Eros", who then rides on its neck and guides it through the castles, to collect the book of spells and find the magic cauldron. On their way they have to fight fierce knights armed with lances and foot-soldiers with long-bows, as well as a variety of weird mythological creatures. The game features fantastic landscapes with a totally new panoramic scrolling action. 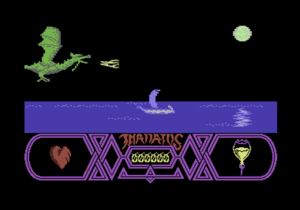 Once a night: Flying over a beautiful Greek ocean with ships and my fire spitting dragon (no attacks!).

Thanatos has beautiful HiRes graphics and a nice melody in the title screen and sound effects in the game. An antique charset is used in the title menu and highscore.

The information board shows you (from left to right): 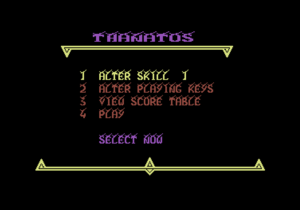 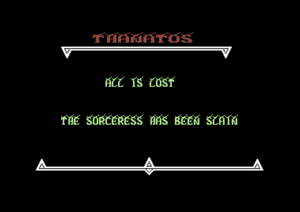 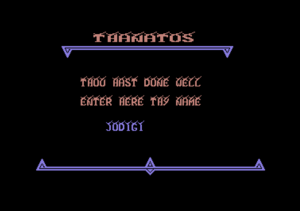 Game over and entering a highscore place.

Using joystick in port 2 or keyboard with defined or standard keys and also keys 1-8 in menü.

The standard keys are: 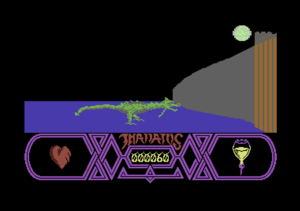 The first castle, but the door isn't open...

The game has got three episodes at each end is a castle, which are important things to collect! In each episode are several different phase of attacks and landscapes. 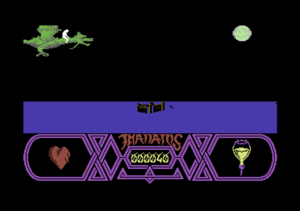 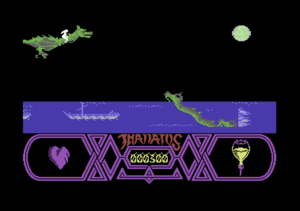 Cracks with different trainer versions are also available at CSDb.

This is normally set from the main menu, ranging from 1 to 8, however it can be set to 0 by modifying the memory location at $65 while at the menu. In VICE that can be done from the monitor with:

This is the code which checks if you are running out of energy:

So in VICE monitor you can set the NOP instructions with:

One of the already existing trainers used the following (with the difference that you do run out of energy but never die):

This is the code which decrements the fire available:

So in VICE monitor you can set the NOP instructions with:

This is the code (commented) for the enchantress falling from the dragon in the spider cave:

By causing the above to always redirect to $25BC or simply returning from the subroutine (with RTS) when it checks, the enchantress will never fall. This is the modified code:

So in VICE monitor you can set the above instructions with:

Jodigi: "It's a nice game idea with a very nice game graphics, but the game is very hard to play also in easy skill mode!" 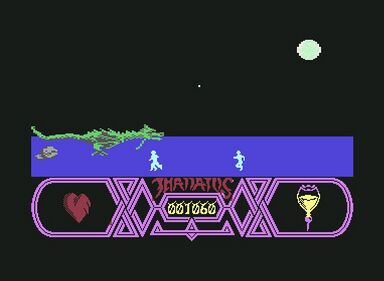