In 2047 a method was developed that allowed the humans to travel to planets in nearby solar systems and even build colonies there. In 2050, the first colonists left the Earth to populate four planets of the "G-type": Alpha Centauri, Tau Ceti (III), Van Maanen and Beta Hydri. Seven months later they reached the inhospitable, desert-like planet Tau Ceti and instantly started to build up a new civilisation. In the first 90 years the colony flourished, more than 30 cities could be built up and active trading with robot technology and ressources that were mined from underground caves formed the economic backbone of the society in Tau Ceti.

In 2150 Tau Ceti and one other of the four colonies were afflicted by a catastrophe: A deadly plague, the Encke-Syndrome, broke out and left only a few survivors behind. The people abondoned the planet and left it to the automatic control systems and robots. Two years passed until a medication was developed on Earth. The contact to the two colonies that had been untroubled - Alpha Centauri and Beta Hydri - was re-established, but exactly at that point of time a meteor crashed into Tau Ceti and the radio contact with the control system broke off. Nevertheless, the decision was made to repopulate Tau Ceti and already in 2164 the first Tau Ceti expedition took place. A single space glider landed safely on the planet's surface and could just send an emergency call to the Earth before radio silence set in. Experts were convinced that the robots had gone amok after the impact of the meteor.

After seven years, - in the meantime Van Maanen is repopulated - a second expedition is organised. It seems that the only possiblity to switch off the defence system on Tau Ceti is to shut down the main reactor of the defence system. For this, the cooling system needs to be assembled, whose parts are scattered on the whole planet and need to be collected and put into the massively shielded fusion reactor in the capital Centralis, with the help of an armed glider. Although the chances are at the highest one to fifty you have nevertheless volunteered...

Tau Ceti is a graphically very well done game (especially the infrared view with the blur effect is interesting) that can do without any music. The sounds are limited to the most necessary. To decide for a genre description of this game is not very easy, the game consists of skill, strategy, flying, science fiction and action adventure elements and puzzle sequences. At the start, the game seems very difficult but as soon as you master the well-done controls of the glider and the board computer it is great fun to switch off the misdirected defence system of the planet Tau Ceti and to search for the cooling element parts and the main reactor.

The glider is a small fighting machine which poses a challenge for every pilot. The equipment consists of the following:

After the start of the game with the Space key you see a scroller at the bottom of the screen which contains information about the background story. The rest of the screen is taken in by the console of the spaceship which is currently in a basis. 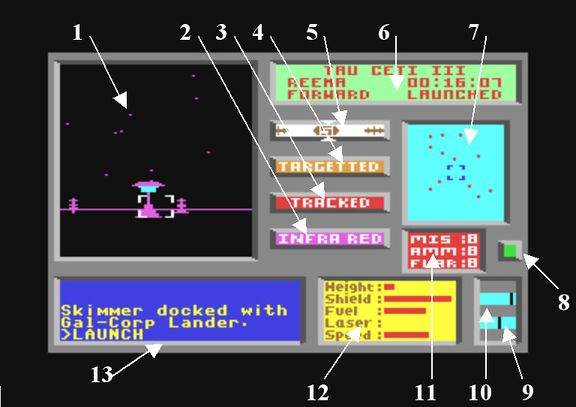 If the glider is in flying mode, it can be controlled by joystick or keyboard; in the ground mode, the board computer can be controlled via input into the console. You get into the ground mode by docking the spaceship at a basis or by landing (speed to zero, height to zero, press "L" key). While having landed, you will not be attacked as the sensors of the defence system only react to levitating or moving objects.

The board computer[edit | edit source]

To get to the planet's surface you should at first type LAUNCH. Now you see the scarce landscape in daylight, if you have not waited for too long. A day on Tau Ceti is very short and approx. corresponds to one hour on Earth. On Tau Ceti the day is divided into 16 "Spins". After sunset the planet's surface is clad in complete darkness, the infrared view (key "I") should therefore be activated immediately.

When flying around freely on Tau Ceti, those buildings stand out which are equipped with a docking station. These immediately catch the eye by a shimmering pattern at one side of the building. The docking is made by a very careful approach towards the centre of the flashing area. As soon as you are in the building, the computer switches to ground mode, now you can access all the services in the build (refuelling, etc.)

Each of the altogether 32 cities has a great number of buildings as radar towers, turrets, civil buildings, etc. You can fly with the glider into the following: reactor stations, militäry and civil bases, the Gal-Corp-Lander and then main reactor in Centralis. In the reactor stations the single parts of the cooling system that needs to be assembled are stored. When you have found all 40 parts, they need to be put together to 20 cooling bars like a puzzle. (Shades of Impossible Mission.. each two parts make one bar seen from the top, so a circular area, by turning, reflecting and recolouring). The assembled cooling system should then be inserted into the reactor in the town Centralis, not an easy task, because this reactor is of course the best guarded building of the whole planet. Most of the towns are guarded by three types of well-armoured chaser robots, additionally heavily armoured mobile defence systems are around. Luckily, mines are shown by the radar scanner. Another hint: Tau Ceti is planned to be recolonised after the end of the mission, so the desctruction of civil buildings should be avoided.

The map in the board computer

This is called up in the ground mode, so in buildings and after landing (height zero, then key "L") by entering "Map" and it is operated with joystick and fire button.

Tau Ceti has a system of teleports (jump-pads), that allow simple travelling between the cities. The single teleports were built after an out-dated, not programmable "Super Traveller" standard, therefore you can only reach one single town from each teleport. The board computer, however, contains a database of the whole network, you just need to find the right teleport. These devices, which can be recognized by the squared planes on the ground with dedicated tower, are always at the northern, southern, eastern or western border of the city. To activate them, you need to press the key "J" and keep it pressed until you fly over the jump-pad (no matter in what direction). Near the teleport you need to beware, as the "sand jumpers" like to hang around there, a life form domestic on Tau Ceti. 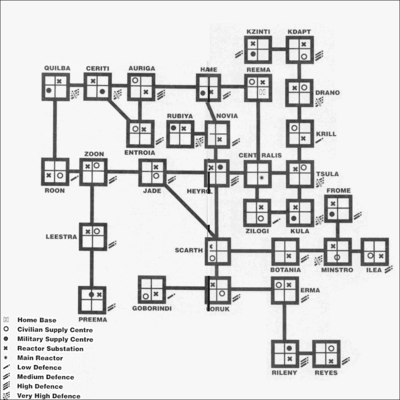 H.T.W: "Unbelievable! After over 20 years I have finally made it through the game! And even without cheats - but with 1000 and 1 savegames ... ahem! But this section is about critics, so:

The story cannot compete with the novel from Elite, but it is well written and gets you in the mood for the game. The manual is written in a slightly complicated way (somehow you always think that you need to learn the operation of a fictitious computer), but you quickly find out that you only have to take in a few commands. The aim of the game is understood, but at first it stays a bit unclear what you need to do...
After having found out the controls of the glider and the operation of the map and the jump-pads you will most definitely start a journey to Centralis, where you can experience the explosion of the glider after 10 seconds. So you start another try into a different direction, where you can get to know the peculiarities of the buildings and robots. After searching some reactors the aim of the game gets clear: You need to find all 40 parts of the cooling system, put them together (this is by the way a funny puzzle part in the game) and bring them to Centralis to insert them into the main reactor. If you now draw a map of the connections and the buildup of the single cities and then find out, that the defence gets less when you insert some cooling rods into the main reactor, then the difficulty grade of the game loses its terror and eventually Tau Ceti will be ready to be populated again.

About the graphics: This is very atmospheric by the change of day and night and the infrared view with blur effect are nice to look at. Furthermore it is relatively fast filled out.
Concerning the sound: This is not exceptional but fitting the game well.
As a summary you can say, that the game well deserves the points that the magazine Zzap!64 has given in the test. For me one of the best 3D games that I have ever solved."

Robotron2084: "GREATEST GAME EVER WRITTEN is humbly emblazoned on the game's cover. Well, maybe to be more honest they should have written beneath "BY CRL", because this company has otherwise only attracted attention by their astonishing number of junk games. With one exception: TAU CETI! An inventive and above all technically impressive mixture of tactical 3D shooting in the style of Battlezone or Encounter spiced up with various puzzle and strategy elements. The attack on the defence systems bristling with weapons requires advance planning and sometimes a lot of patience, or otherwise your cockpit will be smashed mercilessly to pieces. The day and night phases are done very atmospherically, especially the sneaking up with infrared is well done. The difficulty grade is pleasingly high - when you trudge into the hangar with the last shield and fuel resources after a fierce gunfight, one can let out a deep breath of relief. What I did not like that much is, that TAU CETI is rather a boring matter, which offers only little motivation to try it again once you have managed the game. Here, some smaller, randomly generated maps as e.g. in Impossible Mission and a time bonus could have raised the motivation to improve oneself. But the game is also good how it is and worth a recommendation. Side note: try and enter some X-rated things into the terminal and see what happens... hilarous! 8 out of 10 points." 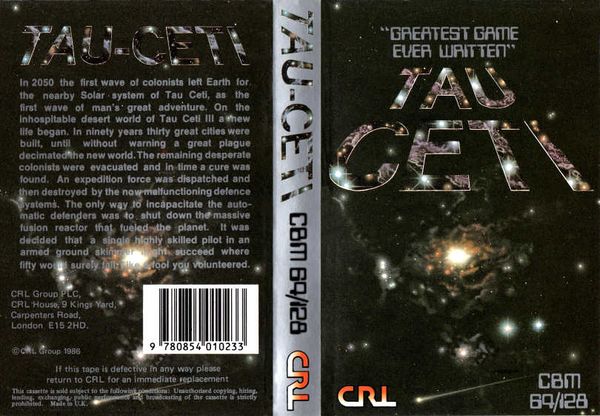 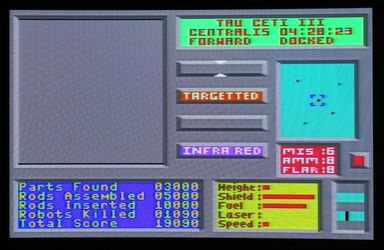