1919: fighting against a double decker and a zeppelin

1940: Here you meet pursuit planes and at the end a bomber.

Space-Pilot is a multi-directionally scrolling shooter by Kingsoft from 1984. The player steers a figher jet, which has obviously been equipped with a time machine, through 5 time zones, in which he has to defend himself against hostile flying armed forces fitting the corresponding epoch. If 56 hostile machines have been destroyed, a mother ship appears which can be shot with 5 shots, whereupon the time jump to the next era follows.
Bonus points can be gained by collecting sky divers and destroying enemies in formation flight.

After finishing the fifth and last time zone successfully, the game starts anew.

Space-Pilot is a 1:1 copy of the arcade machine "Time Pilot" published by Konami in 1982.

1970: Watch out for the homing missiles.

The own jet is always in the centre of the game area, which scrolls into all directions by changing the flying direction. White and grey clouds are floating across the sky and can cover both friend and foe, but are otherwise totally harmless. The objects in the game are designed simply, especially the clouds seem blocky. The tendency towards flickering or momentary disappearing of enemies, if there are many of them on the screen at the same time, is highly visible. In such moments there is also a perceptible slowdown of the happening in the game. The scrolling is rather ungentle. The time jump at the end of a level is shown by a stroboscopic effect.
Space-Pilot has no music, the minimalistic sound effect sound thin and tinny. The highscore is not saved.

1983: These jets are very manoeuvrable and generous with missiles.

2001: In the last level you fight against flying saucers and a huge ufo.

The version by Nostalgia has trainer options.

Robotron2084: "A technically not convincing game, which is more fun than one could assume despite its many faults. 5 out of 10 points."

H.T.W: "Very good conversion of the arcade machine with controls you must get used to and partially off-key sound. But always worth a game due to the retro factor."

Colt: "A conversion which is rather acceptable for 1984 and despite the slowdowns and other small defects can be played rather well."

TheRyk: "I know really worse shooters that were released much later and cannot hide behind their age. In my opinion Space Pilot deserves a nostalgia bonus despite the flaws and passes for me as a rather good shooter, 6 points."

Equinoxe: "I found the game simply great at that time and spent the one or other hour with it. If you get the hang of the unusual controls, the difficulty grade is unfortunately not really high any more. However, 6 points from me." 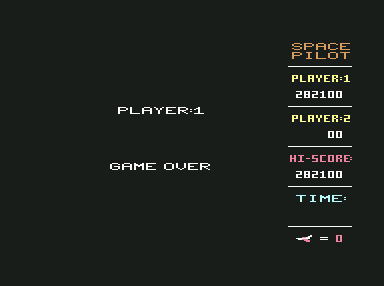