The aim of the game is to solve all levels of the King Solomon’s mines. Basically: first get the key, then head for the door and go to the next level. To make your way you need to conjure up or remove blocks. But beware: not all blocks can be removed!
To make it not too simple, there are some nasty creatures in the mines that of course have it in for you. To defend yourself, you can either lock them into blocks or shoot at them with fire balls (if you have collected some already). Some of these monsters also do not like it if you remove a block from under their feet. Scattered in the mines are also useful things, such as fireballs, extra points, extra lives, etc.. These bonus items can also be invisible or hidden behind a block. To make an invisible item visible you need to conjure up a block at the place where an invisible item is placed and then remove the block again. Caught fairies help you to get an extra life.
The logic puzzles in some levels are very hard to solve without the right bonus items, therefore you should search each level very thoroughly. It is an additional difficulty that the time is not unlimited.

The game Solomon's Key offers static single screens, many moving sprites, sound effects and corresponding background music. At the top the current player, the number of points, the bonus time left and the current bonus points are shown. At the bottom the number of lives that are left are shown in yellow.

It is relatively unknown that there is already a level editor built into the original game. In the version (Nostalgia) the editor is available any time during the game (not in the menu!) as soon as this option is switched on in the cheat menu, and can be reached by pressing the key "RUN/STOP". By this you get into the editor mode.
When you are in the edit mode, you will notice a cursor coordinate at the upper rim of the screen. Move them with the keys F1, F3, F5, F7 or a joystick in port 2. The cursor itself is invisible until you press the key "N" (next object).

Do not try to play the levels "HI" or "ST" as the game will crash, if you do not call them up from the game routine!!

Keys in the editor:

H.T.W: "This successful conver5sion of the arcade machine is an inventive puzzle with a strategic touch that challenges the brain cells and also requires skill from the player. The built-in level editor should also be mentioned and the fact that (as far as I remember) the C64 version has 33 levels and the Schneider version only 20 levels. "

Robotron2084: "The game cannot score graphically and sound-technically, but instead with a highly good gameplay. The controls are precise, the course of the game is smooth and the difficulty grade rises continually without creating unnecessary frustration. But you should keep in mind the list of bonus items, as they round it off. Nice game! 7 out of 10 points." 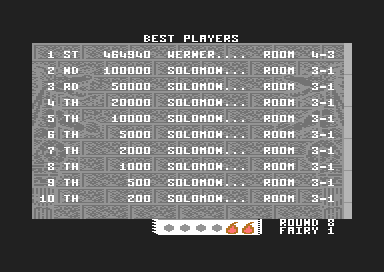