No time for species conservation: the Sabre Man carves through the wilderness.

Sabre Wulf is an action adventure game originally published by Ultimate for the ZX Spectrum in 1984.

Sabre Man must explore a 256-screen jungle labyrinth to find four pieces of a magical amulet. He has to tackle an assortment of enemies, such as the jungle spirits that will kill him if he lingers too long and the indestructible Sabre Wulf. His trusty sabre is his only defense, but to aid him there are exotic orchids, random bonus items, and the occasional extra life. The game ends when Sabre Man successfully reassembles the amulet and exits through the cave.

Sabre Wulf was a hit with gamers and critics, and Personal Computer World magazine awarded it 10/10. Firebird ported it to the Commodore 64 in 1985.

Although it might look like it: the aim of the game is not to run around in circles without sense.

Firebird obviously played it safe with this conversion, and rather than exploit the talents of the C64’s SID and VIC chips they settled for an almost one-hundred percent clone of the ZX Spectrum original. The background, jungle, and animations were all copied wholesale without much improvement. Sabre Man’s fencing movements are more elaborate but still look choppy. Larger sprites, like the rhino or Sabre Wulf, flicker worse than they do on the humble Speccy. Disappointingly, the screens don’t scroll and instead merely flip to change. The sound effects don’t improve much on the Spectrum’s lo-fi one-bit beeper sounds. Three short jingles play at the start and end of the game and whenever the player collects a piece of the charm. These, like the title screen’s music, come from Bach (BMV846).

The game has a high score table, but it does not save.

Our hero. He starts with four lives, but every statue he collects earns him one extra life.

His mission is to find the four parts of the holy ACG (Ashby Computer & Graphics) charm, which will enable him to get past the shaman blocking the cave at the jungle’s exit.

Using his sabre skills, he can defend himself against the unruly inhabitants of the jungle. However, he can only defend left and right – because of the way he moves, he is unprotected at the top and bottom.

The jungle is chockfull of bonus items such as diamonds, swords, water bottles, and sacks that net the player 150 bonus points. 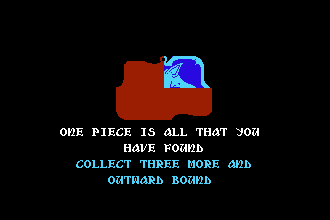 A first piece of the charm has been found.

Wild orchids abound. These regularly bloom, and touching the magical blossoms will have the following effects:

An endless stream of tarantulas, snakes, scorpions, bats, and other animals appear in every screen. Sabre Man can easily dispense with them, and each one reaps between 165 and 195 points.

Rhinos and hippos love lying at crossroads and will happily block it with their bulk. Sabre Man cannot kill these pachyderms, but he can motivate them to shift with a well-placed stab in the butt, after which they frantically take to their heels. When these beasts attack, Sabre Man can fend them off by delivering a sabre to the nozzle.

The natives, who are also invulnerable to the sabre, are constantly on the warpath. They dash from screen to screen, and when struck they merely walk in the opposite direction.

The eponymous arch-villain of the game: an oversized prehistoric wolf that patrols the lower rim of the screen, always on the search for a juicy Sabre Man, who it hunts and mangles mercilessly. This beast is immune to attacks and the only possibility to escape him is to instantly take flight, though of course players can quickly pass him with the help of the turquoise orchid.

These strange creatures appear whenever Sabre Man lingers too long in one location. They are immune to attacks, and a single touch is always deadly. However, if the player manages to stay on the screen (for about 30 seconds) the ghost light will disappear, resulting in a bonus of 195 points.

The end of the game. Instead of congratulations the player gets an advertisement for the next installment. What cheek! 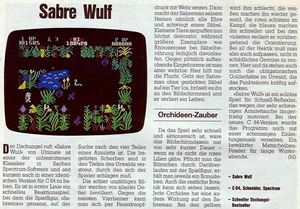 Robotron2084: "Seen in the historicaly context it is surely a milestone in the action-adventure genre, at least on the Spectrum. But what we got here on the C64, looks to me rather loveless, it is too similar to the original version, which in my opinion can be played on the spectrum with much more grip. Sabre Wulf is far from being a conversion catastrophe as e.g. Jet Set Willy, but it could have been a bit "more". Flickering sprites and unfair situations as long vertical corridors, in which you can neither fight nor sidestep or natives, that run you over out of the blue, dampen the fun in the game. However, Sabre Wulf is an above-average game all in all, which inspired dozens of imitators, as e.g Robin of the Wood, Starquake or Firelord, whereby especially the latter two outrank the prototpye without any problems. 6 out of 10 points."

pj64: An excellent port of a classic Speccy game. But it fails to exploit the C64’s greater video and sound abilities and will probably leave C64 owners unimpressed. 7/10. 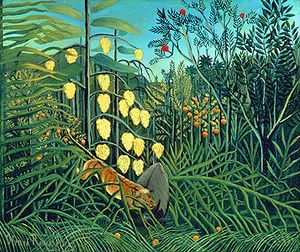 A Sabre Wulf is hidden in this picture. Can you find it? 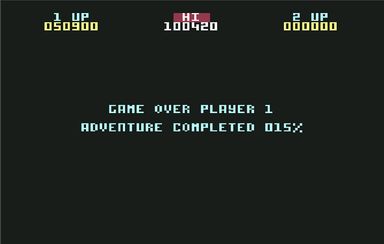