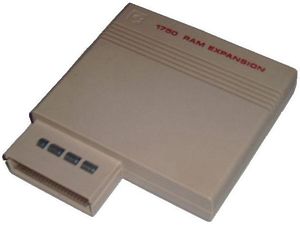 A REU (RAM Expansion Unit) is a hardware device that increases the amount of RAM available to a computer[1].

The MOS Technology 65XX and 85XX family of CPUs have an 8-bit data bus and a 16-bit address bus[2]. Memory addressing by the CPU alone is therefore limited to 64 Kb at any one time. The only way to improve (but not increase) this limit is with external so-called bank switching logic; which swaps blocks (banks) of memory that the CPU can see (address). The VIC-20 does not have any such logic; the C64 does, but it is used only for mapping ROM and I/O-Registers into the address space in place of RAM, not to switch between several RAM areas. The C128 does have RAM bank switching logic[3] (in an additional IC). The MOS Technology 8722 MMU (Memory Management Unit) supplies this logic in order to swap 2 banks of RAM which provide the C128 with 128 Kb of RAM. Unfortunately due to competition from new 16/32-bit computers available at the launch of the C128, Commodore discontinued further development of the 8-bit MMU. However, the potential for RAM expansion was evident, even if the demand was not clear; the REUs were therefore created as a more cost-effective way to increase the default memory of an existing computer. Although Commodore were notably absent[4] from the 1984 CES (Consumer Electronics Show) and COMDEX (Computer Dealers' Exhibition), at the 1985 CES a demonstration of the new Commodore REU with the famous spinning globe demo was on display[5]. REUs continued to be developed and refined for over a decade.

The REU contains a logic IC and DRAM. The IC is is known as a REC (RAM Expansion Controller), and contains the logic required to swap banks of memory on request from code executed by the CPU. The RAM is not directly accessible[6] to the CPU and, therefore, no code in the REU can be executed in situ. The data must be transferred to the (default) RAM that is directly accessible to the CPU before it can be executed. Nevertheless, the main advantage of the RAM expansion module is rapid retrieval of relatively large amounts of data. However, RAM is a volatile data storage medium, and data stored within the RAM will be lost when power is interrupted or removed. If data is to be retained for future use, it must be backed-up on a (more permanent) secondary storage device. Some REUs will not operate without an additional power supply (due to the power demand of the ICs) and some have internal power to maintain the contents of the DRAM. The REU attaches to the expansion port of the C64 or C128 and is contained in a cartridge-style (or larger) case. As with all cartridges though, REUs must be attached when there is no power to the motherboard.