From C64-Wiki
(Redirected from motherboard)
Jump to navigationJump to search 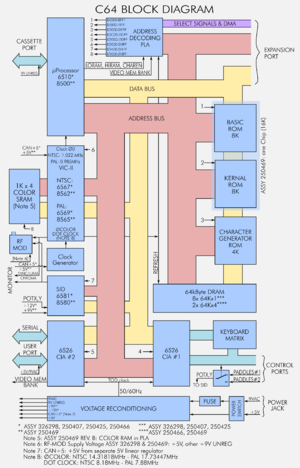 Block Diagram of the Motherboard[2]

The C64 motherboard (also mainboard, system board, logic board) is a double-sided PCB (Printed Circuit Board) featuring conductive tracks etched from copper sheets laminated onto a non-conductive substrate. The motherboard features electronic components (CPU, ROM, RAM etc) embedded directly into the substrate or seated in embedded sockets as well as connectors and interfaces for internal and external peripherals. Component identifier labels are over-printed on the PCB. Together, the boards and components are referred to as a PCBA (Printed Circuit Board Assembly). The C64 motherboard operates on TTL (Transistor-Transistor Logic), uses a composite system bus for communications and many of its components are IC chips dedicated to individual tasks.

C64 motherboards first appeared for retail in August 1982; and although they displayed the year and revision number, the year was soon omitted. In order to improve efficiency and reduce costs, designs were frequently revised. It is important to note then that there is no intended correlation between the chronological development of PCBs, components and cases. Although there may be some pattern setting during the assembly runs, this cannot be relied upon to date a motherboard. An inspection of the PCB must me made if certainty of motherboard type is required. Additionally, there were many C64s returned to Commodore for repair, and motherboards were replaced with what was available; with the replaced board likely to feature in the repair of another C64. In short, nothing should be inferred about the lineage of a motherboard.