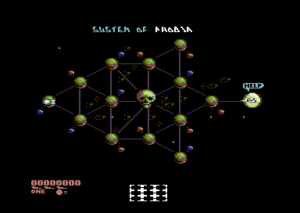 Once again, a princess has to be rescued. The evil Lord Phobos has kidnapped the daughter of the galactic president and is holding her prisoner on the sun. To get there, several planets must be destroyed, each representing a different kind of nightmare.

Phobia is a horizontally scrolling shoot'em'up in the style of Katakis or Armalyte. The goal is to fight your way through at least 9 planets of the Phobos system, destroying them by defeating the boss to gain access to the planet's interior. After you have defeated the boss, a second level follows in which you fly through the interior of the planet to retrieve a shield fragment at the end. Nine such fragments are necessary to protect the ship and allow an attack on the sun itself.

Lord Phobos has deployed other defensive systems, such as its dreaded Solar Troops, which are on the move at the other end of the star system, trying to block the routes to Phobos by erecting light barriers between the planets, which destroy any ship that tries to break through at light speed. The only option is to sacrifice a ship or a space pod grabbed from a blinking moon. These containers (space pods) can also generate higher firepower if you collect enough energy (power-ups). In some cases, further enemy attack waves must be defeated on the flights between the planets.

The enemies and graphics of each planet are designed according to a specific scary theme. For example, countless spiders cavort in the starting level of the planet Arachno, while fire and flames are the dominant theme on the planet Pyro. On each planet, the key generators must be shot down to successfully complete the level. If this does not succeed, the level must be played again.

The game graphics of Phobia are very colourful. Many enemies await in each level and also a large part of the background graphics can and must be shot down in parts. The title track is impressive due to the use of digital drums and voice output. The levels offer a high degree of variety due to the fact that each planet is designed according to a theme from the area of dread (e.g. Planet Pyro = fire, Planet Arachno = spiders... or the dentist), although the gameplay is quite similar. Parallax scrolling is partly used in the levels. Despite the large number of objects, the game runs smoothly; however, because character graphics are also moved alongside sprites, the graphics sometimes contain blocky edges. The difficulty level is very high. 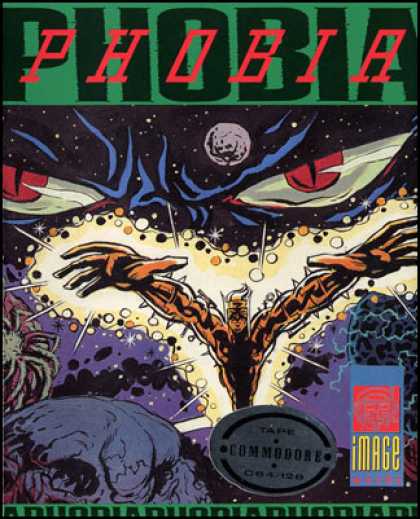 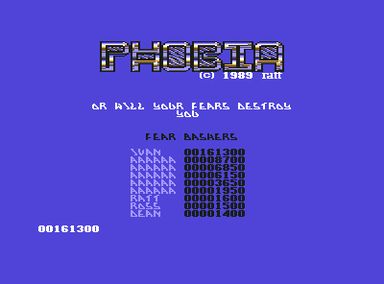