The "Flight Simulator II" (FS2) for the Commodore 64 was released by the company subLOGIC in 1984, one year after the first version for the Apple II, in which the graphics were practically the same except for some slight differences. There was a version on tape and one on disk. Enclosed was a 90-page manual "Pilot's Operating Handbook and Airplane Flight Manual", a 92-page book about aeronautics, four flight maps and a double-sided "Quick Reference" map.

The FS2 is more than a game, it offers many characteristics of a real flight simulation. It simulates the Piper PA-28-181 Archer II (a single-engined, 148 mph fast machine without retractable landing gear) and is equipped with all essential instruments, so that also an IFR is possible. For navigation you have several radios available with which beacons can be located. The reliability of the plane can also be set.

For operation you use the keyboard. All commands can either be entered with a single press on the button or with CONTROL + key. SHIFT does not play any role. Optionally you can also plug in one to two joysticks, the one in port1 to control the plane, the one on port 2 to accelerate or brake.

Through his window, the pilot looks onto a quasi 3D landscape, in which he can move freely with his plane. It contains lakes, mountains, streets, some (few) buildings and of course landing runways. There are nine views available: next to forward, backward, right and left these are also the diagonals (e.g. front left) and a view downwards. A "radar" mode makes it possible to recognize the plane's position in the surrounding.

The simulated world contains day and night, two layers of clouds and four wind levels. The standard scenery does cover the whole of USA (without Alaska and Hawaii), but only 4 areas with data: Chicago, Seattle, Los Angeles and New York/Boston. Contained are 80 airports, with ATIS and a series of runways with ILS as well as a list of beacon frequences (VOR, NDB) and the coordinates of some sights. In the folllowing years a series of subLOGIC Scenery Disks was released that did not only contain the whole of USA (without Alaska), but also parts of Europe and Japan.

In order to be able to move faster and easier in the scenery, the FS2 contains a "SLEW" mode, in which the current coordinates are displayed at the top of the screen.

This mode can be entered into the editor menu, same as 35 other parameters (e.g. for flight coordinates, height, direction, clouds, wind,...). If you set AUTO-COORDINATION = 0 and REALITY-MODE = 1, the simulation will get more real, but also considerably more difficult. A mode that has been created in the editor menu can also be saved and loaded again. Nine values for the modus parameters are fixed, the others can be used, i.e.:

With choosing "EUROPE 1917" = 1 in the editor a game starts against a computer enemy, in which you need to fight against 6 planes and destroy hostile factories and fuel storages with bombs. For destroying a factory you get 20 points, for a fuel depot 10.

The screen is divided into two in the flight or SLEW mode: the upper half shows the view onto the surrounding, the lower contains the instruments. At the top they worked in the multi-colour mode with 4 colours, which are different at night than during the day time. If you look at the sides, you notice that a wing is visible as a white trapeze, at the back the helm is visible as a white vertical stripe. In the lower part of the screen the hires mode is used to reach the necessary resolution for the display. The instruments react instantly on changes and by this give a quite realistic image.

The "world", in which you fly, has a size of 10.000 to 10.000 miles with a resolution of about 2,5 ft. and the center approx. 30 miles southwest of Champaign, Illinois. Airports and other details were saved directly from air photographs. The FS2 world is flat, mountains are drawn as objects with polygons onto this plain. Each place is marked with NORTH and EAST coordinates, which have nothing to do with the lines of longitude and latitude of the real world. A change of 1 corresponds to 256 meters. With this only a rough positioning can be reached with the editor, if necessary, you need to correct with the Slew mode.

Compared to the beep sound of the PC boxes at that time, the motor sound of the FS2 at the C64 is done quite acceptably, but a bit monotonuous. Different sounds can be heard in special situations (landing, crash, approach with ILS). The sound can be switched off or on in the editor with the values "0" or "1".

A list of all the commands in FS2 would go beyond the scope of this article. Therefore, only a short overview over the most important key combinations is given here. A full reference can be found under Links - Documentation.

SLEW-MODE (is switched on/off in the editor)

EDITOR (is switched on/off with E)

We put the FS2 disk into the drive and load the programme with LOAD"*",8,1 - RETURN. The border colour changes and loading takes - as shown - 2:40 minutes. Unfortunately, the FS2 does not work with a floppy speeder, so you will need patience here. If you use the emulator VICE, however, you can use the warp mode with Alt +W ; but be careful: switch it off before you make the next input! After some time the display menu appears. Here press A . Next choose the regular flight mode with B  in the menu "Operating Mode". Now it takes only a small while and then you are on the airport Meigs Field in Chicago with the Piper Archer.

We only use the keyboard, as the FS2 can be controlled more precisely with it than with the joystick, due to the rather slow reaction times. The reality mode is default set to "0", so we can simply accelerate and start flying. For this press the ];  several times until the accelerator goes no further - you can see this on the engine console at T(hrottle). The hand on the speed indicator (KTS) moves. When it is above 80, pull the elevator: press B  twice. Now the bird gently lifts, the nose goes up and at the front you see nothing more than the sky. So we throw a glance behind us: press 5  and then B . We can see Meigs Field in the "rear mirror". Due to the slow frame rate of only about 1/sec. the movement is only jittery, but we are flying! Lets look to the left: press 5  and then F . Our left wing gets visible and the diagonal horizon shows the position of the plane.

After a while the "Sears Tower" appears at the left - or respectively the grid graphics that is supposed to represent it. When we have passed it, we take a turn to the left. For this press the key F  once or twice and then quickly G  again, before the plane tilts too much to the left. The movement can be followed well on the instrument with the artificial horizon. The plane takes a left turn and slowly rolls back to its original position. Maybe we repeat the last manoeuvre, so that we finally fly on the opposite course, the compass at the top should read about 180°. This will probably not work precisely on the first try, but that doesn't matter.

As soon as the Piper flies straight again, we try to keep a constant height. For this, we throttle the motor a bit: press [:  several times. Now wait and see how the machine reacts. Meanwhile we watch the altitude indicator (ALT) and the artificial horizon. If we are still rising too much, we take back the elevator with the key T  pressed once. It is not so easy to keep the plane on a stable course at a constat height.

This should be enough for the beginning - you return to the start with + , which reloads the mode. If you want to you can of course go on flying - have fun!

Petrus: "If you want to have fun with FS2, you need patience, an interest in flying in general and the willingness to read a manual carefully. For many people this is a reason to abandon it with frustration or boredom, which I can absolutely understand. But if you get into the simulation, you can have fun for years. A whole troop of 'flightsim' fans has made the first experiences on the C64 with the FS2. I am still today fascinated by the programme. Conclusion: This game is a classic."

H.T.W: "A fascinating piece of software and at the same time the probably most sophisticated and with the subLOGIC Scenery Disks also the most comprehensive flight simulator for the C64. However, the programme is rather complex and you have to familiarize with the material. So nothing for in between, but if you know the Piper Pa 28-181 Archer II and her instruments and flying characteristics after numerous crashes, you have a huge terrain available that wants to be explored. A must for patient people that like spending time with simulations." 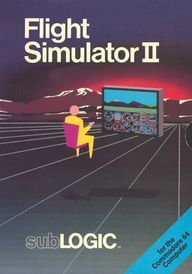 No highscore possible in this game