Since you have seen the light of day, you were responsible for the safety of your people. This was and is your job, yes: your destiny. And you have always done this job with all your heart. But now it has happened. An attack from an overpowering opponent!! And now you are the last soldier left from an ant army that was extinguished by an attack of a group of scorpions. Your only purpose in life is now to rescue your queen which has just been kidnapped by the scorpions' claws. You have followed the attackers to the entrance of their den and prepare now for the most difficult task of your life...

You have to overcome eight caves before you can free your queen. The shafts are supervised by patrolling scorpions that have closed down many parts of the caves. To open the passages you have to bring the correct combination of items to the correct place. This triggers a reaction that removes the blockers (to trigger a reaction you have to press the fire button in many cases). The exit of a cave is always in the lowermost part of a cave. This exit gets you to the uppermost part of the next cave.

When you have rescued your queen, you will be called to the next ant colony that was also attacked.

An arcade platformer with puzzle intermissions. Each level is the size of one screen. The sprites are animated fluently, the graphics are kept simple. No music in the background, but fitting sound effects.

For detailled information about each level, see section "Solution". 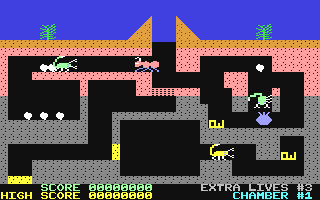 Cave 1
Get the blue diamond in the middle left part of the screen and put it down at the entrance (fire button). This destroys the barrier beneath it. Get the key at the left. Go towards the exit - the barrier at the right is removed. Get the key behind the barrier and head for the exit to the lower left. 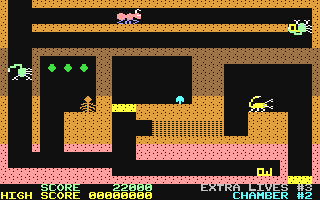 ... the first preview to further tasks 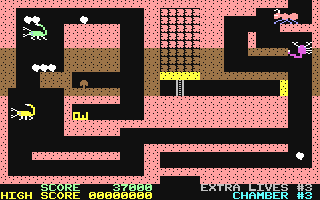 Cave 3
Get the key at the middle left, get the brown umbrella above that, (scorpions harmless for 15 seconds). Through the barrier at the right and take the ladder-like pillar (fire button). The rubble breaks down and opens the exit downwards. Go down to the next cave. 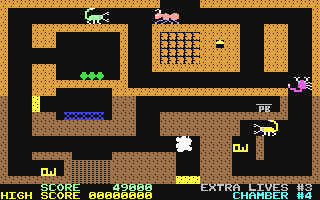 Cave 4
Get the key at the bottom right. Remove the barrier at the middle left and then pick up the blue steel beam parts one after the other (5 pieces) and put them on the pink coloured grate-like mass (build a bridge). Take the grey part with the writing "PE" to the middle right of the tunnel (helps against the flickering object above the last barrier). Take the key at the bottom left and go to the next cave through the barrier in the bottom middle part of the screen. 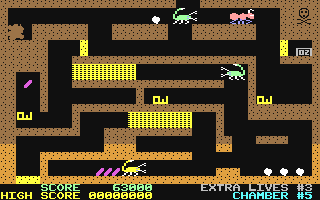 ... now it slowly gets tricky 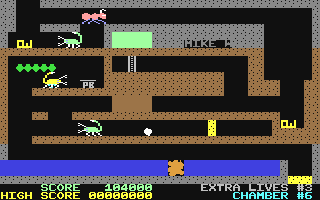 ... an utterly unusual solution ... and on a surf board

Cave 6
Pick up the key directly below the entrance, go to the ladder-like pillar in the middle of the screen and take it (press fire button), instantly go into the passage below or you will be buried alive (costs one life). The rubble disappears and opens the passage. Open the barrier below the long tunnel, then get the last key in the bottom right part of the screen. In the middle left part of the screen, take the grey item with "PE" written on it and the blue umbrella (scorpions will be harmless for 15 seconds). Go to the very end of the long passage where you have already opened the barrier, you are standing on a surf board with which you can glide safely over the water in the lower aisle to the exit on the right. 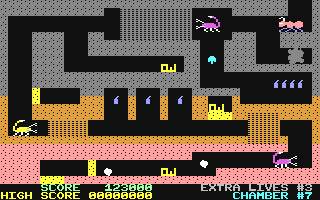 ... now it slowly gets uncomfortable

Cave 7
Take the blue umbrella (scorpions are harmless for 15 seconds), go further to the blue objects (explosives) and bring them one after another in front of the grate-like barrier (they are displayed within the barrier). Then take the grey object below the entrance and bring it to the barrier. The explosives ignite and the barrier is gone. Get the key below the former barrier and open the barrier on the middle left, a green object will be set free that eats its way through the next barrier into the direction of the middle of the cave. Bring the three blue explosive containers to the middle of the cave one by one to the brown grate-like barrier into the right direction. After a further explosion, this barrier is gone, too. Get the key in the lower middle part of the screen, use it to open the barrier a bit further upwards to the right and there get the last key. Walk on to the last barrier on the lower left part of the screen (jolt), a small bulge has formed at the upper left of the cave. Now walk into this new bulge (it is on the left below the main aisle). The last barrier disappears. 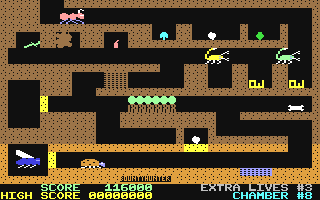 You have made it and set your queen free !! 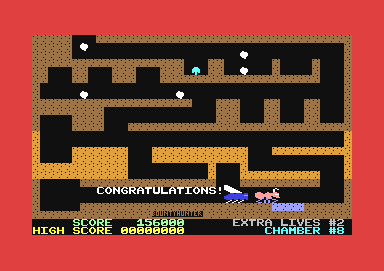 Robotron2084: "It is really only half as bad as it looks, not to say: a surprisingly well playable action adventure with inventive background from a time where Tw*x was still Ra*der... erm... 6 out of 10 points."

TheRyk: "A totally well-done collect'em up game from 1983. It's great fun to play rather riskfully by approaching the enemies very closely in order to steal their eggs for score. The riddles get trickier and more dangerous from cave to cave. Good music was not really invented back then, so you shouldn't criticise the game for its lack but rather be thankful (if you are of a different opinion, you should play some Datasoft games 24 hours and you will either be deaf or at least see/hear my point). Only the rather little amount of levels prevents me from voting this 'very good' game even more than well-deserved 7 points." 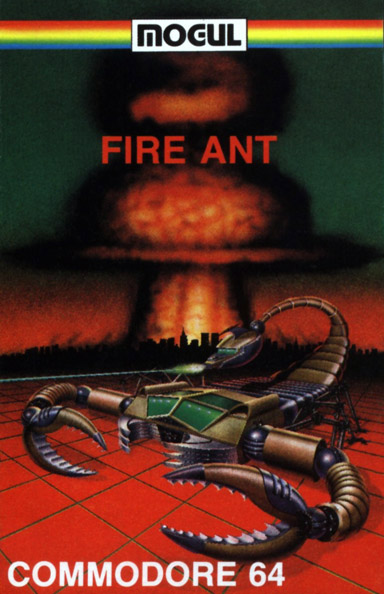 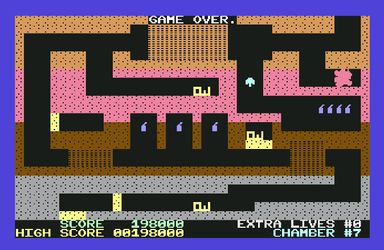