The game Elite has no defined aim and no defined ending. There is no time limit, in which certain tasks need to be done. This open game principle differs basically from all computer games known at this point of time.

As Commander Jameson the player can travel through eight galaxies to boost his career as an astronaut. The success of the player becomes noticeable both in cash money and the grading as astronaut. Large and small mistakes have an influence on the criminal record, which in turn can result in a more hostile behaviour of the authorities or other astronauts. The player's spaceship needs to be navigated through three-dimensional space. The player can control the speed and the rotation around the crosshair and the vertical axis. Unlike Elite 1, the flying characteristics are like flying through the air (not a vacuum) – the maximum speed is reached quickly and a relatively narrow spiralling is possible. Furthermore, the gravitational force of the celestial bodies is missing - one has to steer around planets instead of swivelling into an orbit. The space traffic is handled by orbital stations; landing on a planet is not possible (for the player). Strangely, there is exactly one planet in each solar system with each exactly one orbital station. Docking to them can sometimes prove to be difficult. Interstellar distances are crossed by hyperspace jump of at most 7 light years.

The beginning spaceship is equipped only very basically and the capital is very limited. Additional equipment can be bought which improves the fighting power and the possibilities to earn money significantly. Other spaceships cannot be bought.

The possibilities to earn money are manifold. On the one hand you can trade by using the price differences between two solar systems. The prices of the traded goods are random to a small extent and mainly dependent on the economic classification of the corresponding system. With a space claw you can retrieve unowned items from space, which then can be sold. If the player does not want to wait until other spaceships jettison their shipping containers voluntarily, he can help them a bit by shooting the laser. This procedure is usually referred to as piracy. For shooting pirate ships and asteroids you usually get paid a small award, a bounty. Another source of income is the mining industry, which is the decomposing of asteroids with the mining laser. The parts can be collected and sold.

A special peril pose the Thargoid Invaders. They can pull spaceships from their hyperspace jump and attack them in interstellar space. The octagonal ships of the Thargoids are astonishingly strong and robust. Furthermore, these spaceships send out remote-controlled drones that can be caught and sold. Sometimes these Thargoid ships also appear in space close to planets.

As a special goody the player is also offered in this game version altogether three missions:

The game Elite has the following design features:

The functional position screen in the lower part of the screen shows the position of other objects relative to the own spaceship in Cartesian view.

In the English version there is only one music piece (by Johann Strauß). In the German version, however, there is an additional song. When you have stopped the game with "Inst/Del", there are the following undocumented functions. 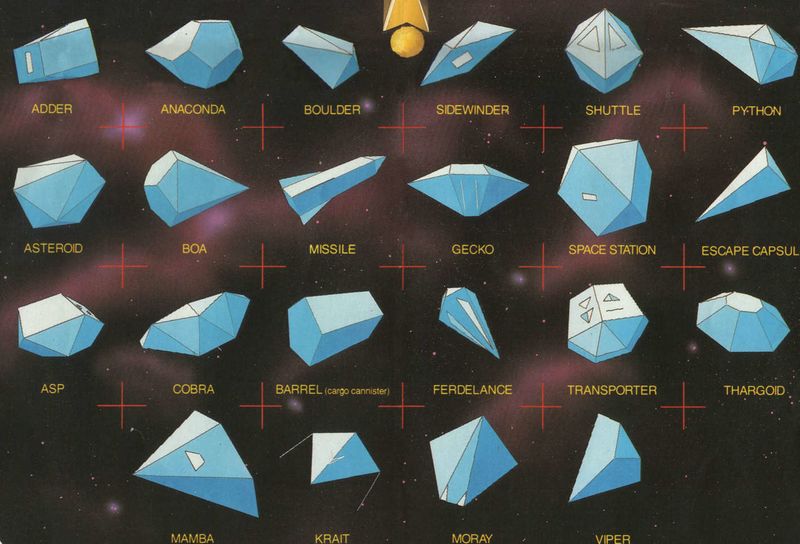 In the BBC version each ship is counted as a kill. In the C64 version a "fractional" byte (a so-called kill evaluation) was inserted, which is incremented by approximately one-third the value given in the column "Kill Value" in the following table (multiplied by 256). For example, a Krait will increment the fractional byte by 85 and a Police Viper will increment it by 26, so you will need to kill approximately 3 Kraits or 10 Police Vipers to earn 1 "kill". 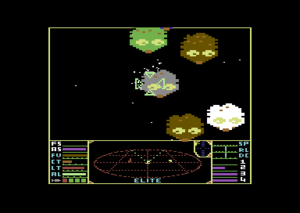 Trumbels are unfortunately not transparent.

The docking is easiest, if you fly directly towards the station as in image 1,

and then fly towards it with fulll speed for about seven seconds, at the same time do not disregard the height indication. During this you can well look out to the rear and watch the stations getting smaller.

Then you stop again, turn and head for the station, are aligned perfectly, only co-rotate and fly in. If it does not work the first time, just repeat.

The docking computer should in no case get switched on, if the station is not yet in sight, as the computer always chooses the direct path and does not consider whether other ships or the planet are in this path.

Landing is most of the time a bit ungentle, but succeeds almost always. If the approaching angle was chosen really very unfavourable it can happen that the docking computer cannot make any sufficient corrections any more. 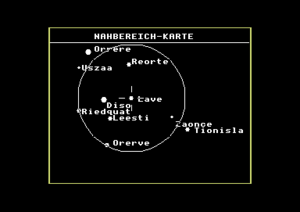 is availabe online on C64Games.de - Game No. 594 . Additionally, you find there star maps of all galaxies, solutions and background knowledge about the missions and the game.

For a start you should transport food from Lave to Leesti. After having sold the food completely, you fill your storage room with computers and bring them to the space station of Diso. From Diso you then fly again with food and later also with fissible material, spirits or furs back to Leesti to start from there again with computers (alternatively, but less profitable also machines and luxury goods).

On the route Leesti - Diso there is often smuggling of drugs/weapons and slaves, however, many a smuggler was ruined because the sales prices are sometimes drastically below the purchase prices. Others were caught by the police or the competition.

Basically, concerning the percentage, food, spirits and textiles are best traded from poor to rich and in absolute numbers per ton, furs, spirits and fissible material. In the opposite direction from rich to poor, computers are always the first choice next to luxury goods, weapons and machines.

The order from rich to poor is:

In the Longplay of the 64er the following places and actions are mentioned, at first rather detailed the first trading flights:

The other events loosely named:

Sledgie: "Elite is a very good combination of a 3D space shooter and an economic simulation. The controls in the game are a bit difficult for a beginner. Especially the annoying landing without computer is not easy. Very good conversion of the game on the C64 and overall an ingenious idea for a game. "

Guybrush: "Concerning the game principle Elite was way ahead of the times!! I myself have not really played it enough to be able to evaluate it."

Darkstar: "When I played the game for the first time, it was somehow too complicated and boring for me. I think I was about 11, did not understand much of the 3-dimensional navigation (this came only with X-Wing on the PC ;-) and therefore was shot all the time or I crashed somewhere. Therefore only 6 points from me."

Anonymous author: "One of the best C64 games at all. 3D vector graphics, unlimited room (this is done by almost nobody, even today), always something going on. It was really fun to play. Good and not normal for a long time yet was also the save function, which made “annulling” of the game status possible. A disadvantage were some hardly to solve battles, if again 6 ships come together and they take full 15 seconds time to destroy the all-around military-laser protected ship in seconds, only because you have already used up the bomb. After 1500 kills you start to search for "new things", but the fun in the game compensates for this."

Spacekowski:"Flying aimlessly through space, trading, fighting and pimping the spaceship. The game belongs to the coolest games of the C64 era. At at that time I had opened my box and rewired the function of the keys to two small boxes on my desk chair. With this I had the controls over the missiles, the shields etc. directly at the chair. That was so wicked! Try that today. "

Equinoxe: "Elite was THE C64 game for me for a long time. Except for various role play games there is no game into which I invested more time than this. I competed with a friend about who will rise a stage higher first. And on the schoolyard the most recent tips and tricks were swapped, Annoyingly he made it a few days before me to be Elite. In the meantime I was in such an Elite-delusion that I imagined while playing that my room was the spaceship and I really was a captain of a spaceship (which worked well with the sight into the starry sky through the dormer). It was a really great time then. Definitely 10 out of 10 points." 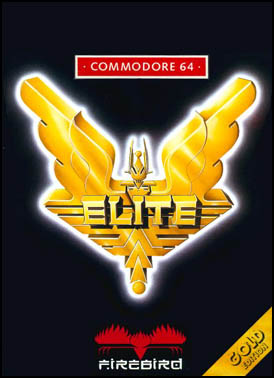 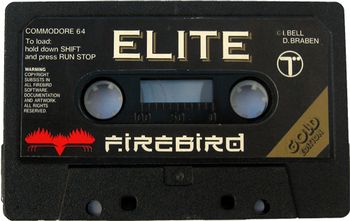 In Elite an own pseudo random generator is used with a six bytes seed. The programmers of the Archmides version "ArcElit" (which were not Bell/Braben) specially integrated a rudimentary 6502 emulator so that on the ARM the same galaxies could be generated as on the BBC B and C64.

You cannot deny the creators a certain humor, as you can find some hints and allusions both in the game itself and in the documentation: 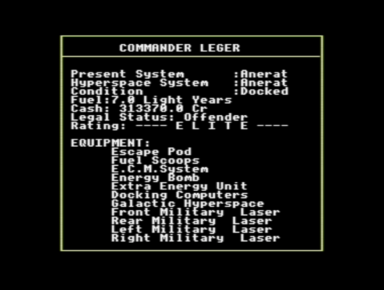