Crossfire is a shooter by Sierra Online, Inc., which was released at first for the VIC-20 and the Atari 8bit computers in 1981 and ported to the C64 in 1983.
The player steers a spaceship over a game area that is parted into seven rows and six columns by 42 blocks. At the border of the game area alien attackers are posted. They are shooting and after some time they leave their secure position to go on a chase for the player. A level is done when the player succeeds in shooting all attackers.
However, the player's spaceship has only limited ammunition, so that more supply has to be collected from time to time. You can gain extra points by collecting up to four bonus items per level.

The graphics are even for a game from 1983 rather bulky and simple. As a background sound there is a saucy electropop version of the title tune from "Peter Gunn". At the right border of the screen you can see the current highscore and score, but there is no highscore list. The level buildup is not changed in the further course of the game. After the start of the programme there is a short demonstration of the game when waiting for a while.

You start with three spaceships and get a bonus ship every 5.000 points. The spaceship can only stop at crossroads but turn around the flying direction at any time.

Around the game area 11 enemies are posted, which shoot at the player and after some time start to chase him actively. When an enemy is shot, it turns into the next type and returns to its original position. Only after the fourth transformation is the enemy completely eliminated. For one hit you get 10 points for the first type, 20 for the second type, 40 for the third and 80 for the fourth. As soon as only five attackers remain, they all leave their starting position at the same time and heckle the player together. Enemies of the same type can accidentally shot each other.

After each twelfth shot that a player fires, one of the four bonus items appears. It can be collected to get extra points. After the appearance of the bonus item the player is only allowed to released a maximum of six shots or else the bonus item will disappear again and no further items will appear in the current level. Collecting the bonus gets you 100 points for the first one, 200 for the second, 400 for the third and 800 for the last bonus item.

:: fire into the corresponding direction

When playing with the keyboard - in contrast to playing with the joystick - it is possible to carry out the movement and the shooting independently (e.g. you can fly to the right but shoot to the left at the same time).

Robotron2084: "A sweaty reaction test without frills from the C64 stone age with groovy music and sometimes hair-raisingly close situations in which you only escape - or do not escape - by luck rather than judgement from the hostile crossfire. Carelessness and wild shooting around is redeemed very quickly with a Game Over. Crossfire is so ingeniously simple, that you can play it again and again, although in the long run the diversification is missing. 6 out of 10 points."

TheRyk: "I absolutely agree! Nitpickers might complain about the lack of further levels. But it is a game from 1983 which is difficult enough in the first place and the increasing need to recharge also increases difficulty, because that is dangerous enough. You need some practice until you experience some kind of flow feeling and can play rather often before it gets boring. 7 points for this easy, challenging and fast shooter oldtimer." 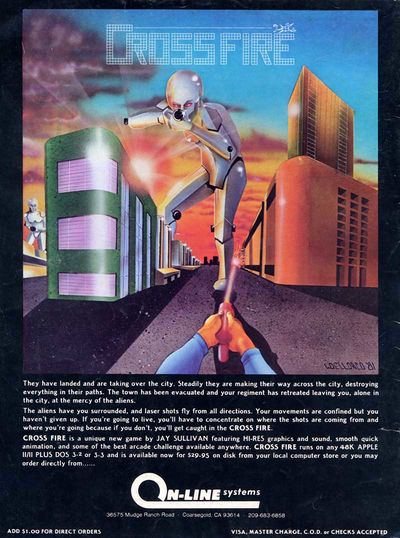 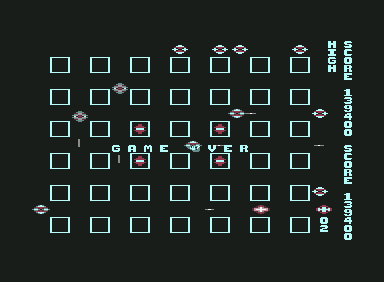