Creatures II - Torture Trouble is a puzzle platformer game developed by Apex Computer Productions and published by Thalamus in 1992. This game is the sequel to Creatures.

This game was released towards the end of the 8 bit era and only got released for the C64. It is considered one of the best exclusive games for this platform.

In the year 2009, it got released as a budget disk edition by Psytronik.

Life has been rather peaceful for the Fuzzy Wuzzy clan after Clyde Radcliffe disposed of the island's resident Demons who had kidnapped his best friends. Their torture devices were mo match for the might of Clyde and his flamebreath.

Clyde had since settled down with Bonnie, a very attractive Fuzzette who fell for him at one of the many 'fuzzy raves'. After several trip to the cabbage path, they were the proud parents of no less than nine cute little fuzzies. Life was just perfect... or was it?

Unbeknown to them, the land they discovered a few years ago and named 'The Hippiest Place in the Known Universe' consisted of no one but three islands. The few surviving Demons fled to these islands and began to construct bigger, better, and more ghastly torture chambers -- they wanted revenge.

The Demons decided to strike during the Radcliffe's anual trip to the beach, and while Clyde and Bonnie were 'walking' in the sand dunes, the sadistic demons mercilessly swiped their helpless kiddies. When Clyde returned, his children were gone -- the only thing left on the beach was a tiny pair of luminous Bermuda shorts.

On their way back to the village they found Chaz lying on the ground, bleeding and out of breath. He told them about the Demons , the new torture chambers, and that everyone in the village was gone. Chaz drew one last breath, closed his soft, pink eyes, and died. A tear ran down Bonnie's face, and Clyde felt a lump in his throat -- he knew what he had to do.

Rather that being another scrolling platformer, this sequel is focus on the torture chambers and puzzle solving aspects from its predecessor. Here once again the player takes control of Clyde Radcliffe, who must rescue his children that were captured and locked in torture chambers by the Demons using on-screen objects and devices. Clyde can breath fire, collecting Magic Potions add new weapons to his selection; these can be obtained after destroying certain enemies (Unlike Creatures, where the player must collect magic creatures through levels for purchasing Magic Potions at a witch's hut).

Another differences from Creatures are the lack of horizontal scrolling levels and sound effects. These changes may have been disappointing for some fans. However, this sequel still mantains many aspects from its predecessor like the humour, cartoon style graphics, Heath Robinson situations, cheerful music, and of course, bloody torture scenes.

The game is set across three islands, each one contains 6 sections: two Torture screens, two Interlude screens, a Demon section and a Island Hopping section. During levels, Bonus coins can be collected (five of them are rewarded with an extra life). In certain Torture screens, Clyde can have access to Hidden Bonus Rooms.

Here is where one of Clyde's children has been placed on horrible and unnecessarily complex torture devices created by the Demons. Here the player must figure out how to free his child before the time runs out (You surely want to see what happens, but it will cost you a life). Here the player can collect Magic Potions that are left behind by destroyed enemies, which add a new pattern to Clyde's weapon selection. 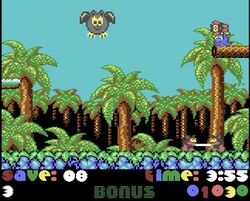 After completing each Torture screen, Clyde teams up with the rescued Fuzzy Wuzzy. They must use a trampoline to bounce a designated amount of Fuzzy Wuzzies to safety, which are being thrown by a monster at the top right of the screen over the edge. If the Fuzzy Wuzzies are bounced carefully, they can be used for collecting Bonus coins (Remember: Five Bonus coins,one extra life). Interludes may have a flying enemy, if it catches a fuzzy, you have to rescue him again. 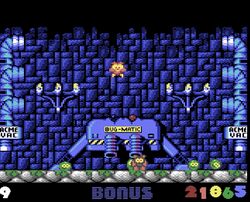 After completing the first four stages of an island, Clyde is imprisoned by the Demons. The player must kill three demons of increasing size by bombarding them with small Bugs, which are being secreted from Bug-O-Matic machines and must be kicked under the Acme Vaccum Machines. 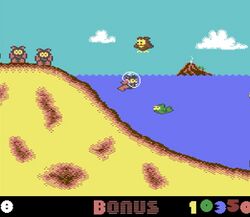 After completing an island, Clyde must take his rescued children onto the next island. Clyde is the only one wearing Scuba diving gear and must transport his children while avoiding enemies. His path may be blocked by tiny islands. The fuzzies must be placed on the lefthand side of the islands and collected from the right. If a fuzzy is left too long on water, he will drown (These sections can be infuriating). 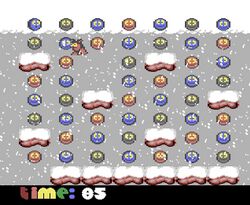 Clyde can only access to these areas in certain Torture screens at certain point at certain time. Here the player must collect as many smilling nodding Bonus creatures as posible before time runs out. If Clyde touches any other creature, he will exit automatically from the Bonus room.

Some weapons that were available on Creatures also appear here.

Solving the Torture screens require being creative and quick. This section will try to explain how to complete them. Note that some instructions can be followed in any order.

PD: After doing this you can access to the Hidden Bonus room. Get into the Snowballs machine and move to the right.

PD: Now you can access to a Hidden bonus room that is at the right of the big smiling creature.

PD: Now you can access to the Hidden Bonus room at the left from the walking creature.