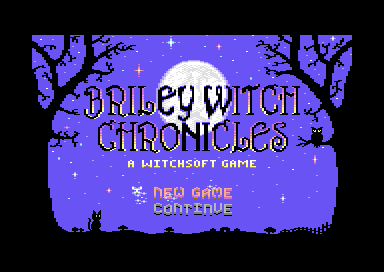 Startmenu of the Briley Witch Chronicles.

Briley Witch Chronicles is a JRPG-style adventure game (abbreviation for: Japanese-inspired Role Playing Game). It was released in 2021 by homebrew programmer Sarah Jane Avory. The game's plot is based on her book series of the same name. You play the girl Briley Forester, who has been whisked away to a fantasy world by a spell. She is accompanied by her cat Smokey, who accompanies Briley through the world as an NPC.

During a meditation at home, the main character Briley Forester is seized by a spell that whisks her away to Maepole, a small town in another world. Together with her, her cat Smokey is flung into this world. Briley's task is to find her way around this world, solve quests and find a way back home.

The game's story is based on a series of novels by British programmer Sarah Jane Avory. She produced the extensive game on her own and also composed the music in the game and designed much of the graphics. Additional graphics, such as the character portraits, were designed by Paolo Rathjen. There are to be sequels to Briley Witch Chronicles. Initially, a physical release on Protovision was also planned for the first part. However, the developer put these plans on hold for the time being.[1].

The game features cute, well-done graphics inspired by classic JRPG adventures like Zelda. Like world is explored in a 2D world from a bird's eye view. Each NPC you interact with has their own little portrait, which adds depth to the characters in the world. The world also has a day and night mode. At the end of a quest day, it gets dark in the world and time for Briley to go to bed. In the morning, she wakes up freshly refreshed - with full hit and magic points - in a brightly lit world.

The very successful music was composed by programmer Sarah Jane Avory and underlines the atmosphere of the game very well. The music changes and underlines the scenes. For example, a more threatening melody is played during battles than during peaceful interaction with other NPCs. 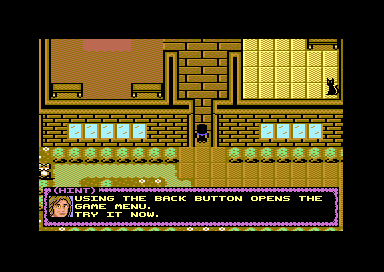 The game has a very advanced in-game help system. From time to time, the developer reports via the text field and gives small hints about the game and shows where certain functions can be found. The "Remind" function can be used to call up information about the current quest. Smokey then tells us where we have to go and what we have to do. The many signs that point not only to the current location, but also to other buildings or places in the immediate vicinity, also help with orientation in the world.

The game supports C64GS compatible joysticks like the Cheetah Annihilator

The game can be controlled either with the joystick in port 2 or the keyboard. For the keyboard controls there are two different presets, which can be switched between with F1 .

The game also supports C64GS compatible joysticks, such as the Cheetah Annihilator supplied with the Game System, which has two independently assignable fire buttons. In Briley Witch Chronicles, the second fire button is assigned with the "Back" function. 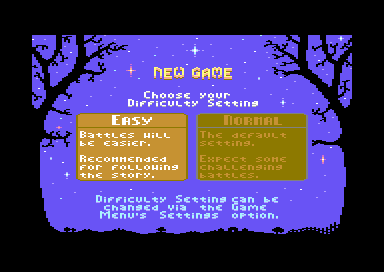 The difficulty level is selected at the beginning, but can also be changed in the game

Briley Witch Chronicles has a turn-based combat system, typical for classic JRPG. If Briley's group is surprised by enemies, the initiative lies with them and it is not possible to flee within the first round. During fights, the player zooms out of the world into a close-up view. Actions are selected by icons in the upper part. At the bottom of the screen are the status displays of one's party. If a fight is too difficult in normal mode, it is possible to set the difficulty level to easy within the game. It is not possible to save during a fight.

Characters in the game[edit | edit source]

The game allows interaction with various NPCs, each represented by a small portrait. Some of them can join Briley's group during the course of the game.

There is no known walkthrough yet! Below is an overview of the first steps in the village of Maepole. 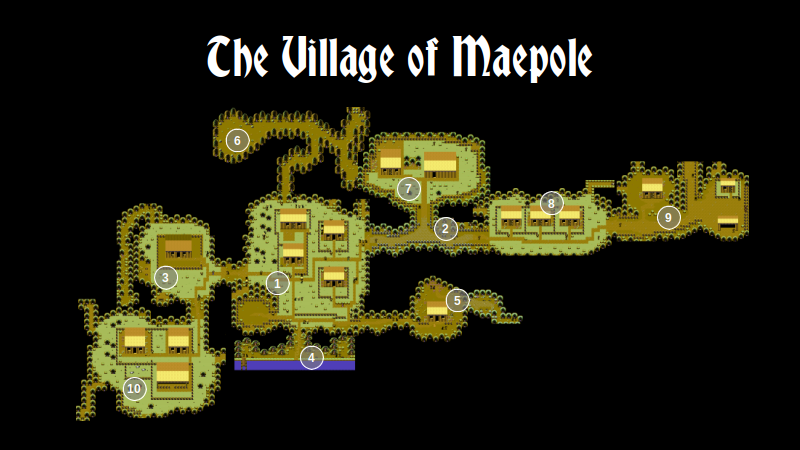 Afterwards, a spell captures Briley, teleporting her and her faithful cat Smokey to another world 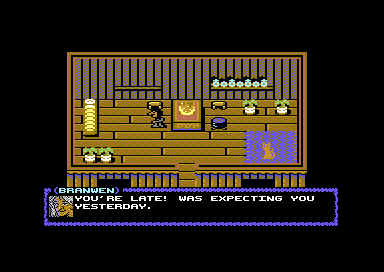 The first quest in Maepole. Deliver a bread basket...

We learn that Briley may be a witch herself

Hunting for rats in the old house

On the way back, we learn more about Sebastian and the disease running rampant in the town in a cutscene

Learn more about the disease and heal the residents 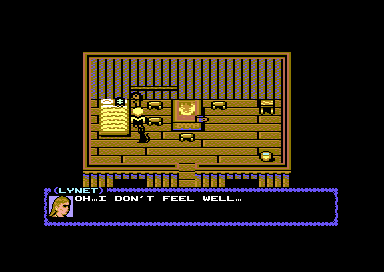 This sick resident could use some tea...

We learn that the residents who drink ale don't get sick and the problem must be related to the river water. Sebastian briefly joins our group, As a reward we receive a magic brush from Clarissa.

We change class to a witch (Witch) and receive a spell book. On our return we receive another magic pendant (Magic Pendant) from Clarissa.

A Delivery for the Blacksmith

We receive a pot and the order to heal his injured leg. Sebastian learns that Briley is a witch. We receive a new spell and a small seax.

A Healing Potion for Calibor'

Just before we leave the forest, we meet Melody Whitehead. She accuses us of witchcraft and must have seen the beam of light that was created during the potion's incantation. 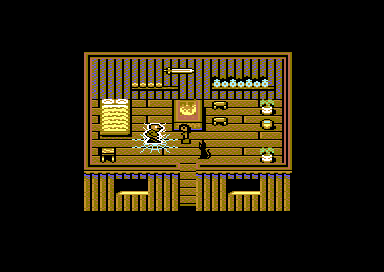 It works! Our potion cures Calibor of his curse.

Free Calibor from his curse

The healing potion frees Calibor from his curse and he agrees to forge us a witch's cauldron. 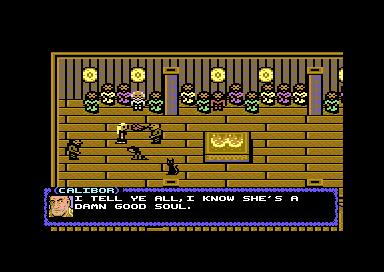 The folkmoot on Briley's witchcraft

The village now knows Briley is a good witch. The molten pot could become the basis for an amulet.

The pendant might help us get back to our world. Calibor wants to tell us more about his personal history at a later time.

The shortcut will allow us to reach places in Maepole from Baxter's house more quickly in the future. While preparing the potion at the cauldron, a cutscene with the Dark Spirit is triggered. We learn the new combat spells "Fire Dart", "Fireball" and "Lightning" (Lightning). Briley has the idea to build a windmill to speed up the grinding of the grain.

If you use the meditation candles, you can sleep peacefully, otherwise you have to fight your way through the nightmares in the enchanted forest like the previous night. To use the candle, it must be placed on the stool to the left of Briley's bed. Once this is done, use the bed to sleep and Briley will meditate, preventing the nightmare. Note that the candle will burn out if you do not meditate shortly after using it, so finish anything else you wish to do (such as brewing tea) before you light the candle. 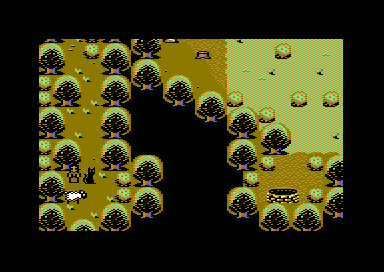 Sheep in sight! You won't escape me that easily...

In return we receive a wooden bow (Attack: 8) which Briley can use as a weapon. After returning to Clarissa we receive the spells "Heal" and "Restore". For both of them you don't need a witch's cauldron, but can also use them in combat or during exploration. 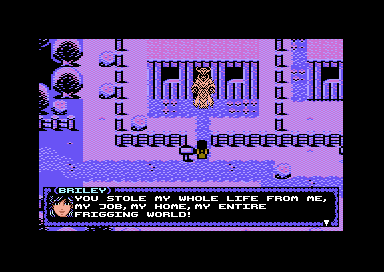 After the errand to the Chandlers reveals itself and the Dark Spirit.

Messenger to the Chandlers' 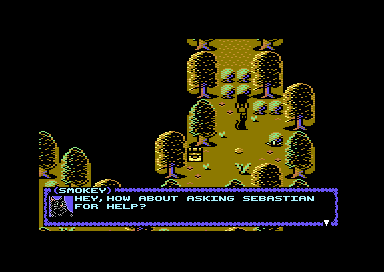 As we leave Chandler's house, the dark spirit appears to us again and opens up that there is a way to return if we help him.

Krautguy: "For me, Briley Witch Chronicles is the best game of 2021. The first time I played it, it turned into a session lasting several hours. The controls are taught playfully in the tutorial-like prequel, and I was very impressed by the possibilities to switch the difficulty level at any point in the game. In this way, different types of players are taken along and you can either concentrate fully on the story or focus on extensive battles. The battle system is very varied and anything but simple, especially because of the changing companions. Since games of this kind - especially Japanese-style role-playing games - are particularly rare on the C64, it stands out once again for this reason."

Zore: "A real masterpiece! I, who am not usually into JRPGs at all, but rather more classic D&D conversions, was spellbound by Briley Witch Chronicles from the start. Developer Sarah Jane Avory is not only able to draw on the full potential of her novel's characters and story, but also realises the game in a technically brilliant way. It's great that further adventures are to be created on the basis of the engine. Almost 40 years after the release of the C64, we now get the "Zelda" we never had before.

At the time of writing, the game is only available as a download with accompanying PDF manuals. A physical release was planned and may follow later.

This game is (currently) only available as a downloadable file. There is no cover available.

Sarah Jane Avory has made several versions available on her channel at itch.io. Some bugs have been fixed in the new versions 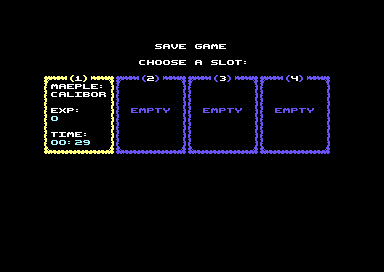 The save menu contains four EasyFlash save slots on the cartridge

The game file is saved in a plug-in module format. To run it in Vice, for example, you have to "attach" it as a cartridge. However, to save the game, one must use an attached empty floppy image in drive 8 or 9. Saving to cartridge is not possible in the emulator or an Ultimate 64, although the save process is initially shown as successful.

The high score is the number of experience points (EXP) earned by Briley. 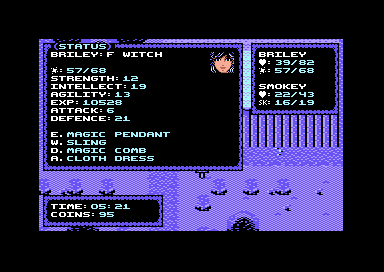