The programmer Sarah Jane Avory has been programming computer games for years, including for the Amiga, Atari ST, Sega Mega CD, Atari Jaguar and Playstation computer systems. She is also known for her fantasy book series "Briley Witch Chronicles", as well as other books.

Her programming career began classically in the 1980s with the purchase of a VIC-20, followed by writing programs on the C64 and the Amiga.

Her return to the popular retro computer systems of the 1980s such as the VIC-20, C64 and Amiga only began recently. She rediscovered her love for the C64 around 2017 and has since been programming some very good C64 games in the rest of her spare time to get the most out of the C64. At times, her C64 games have been distributed by publisher Protovision (May 2018 until the end of 2021), some of which were also available for free as PDs.

Many of her C64 games got good reviews and critiques, participated in C64 game developer competitions and some were also awarded prizes.

Meanwhile, all C64 games are distributed digitally under their own company name or label Witchsoft itself on the sales platform itch.io for a fee. 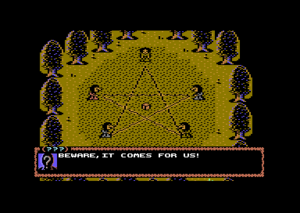