Bounty Bob strikes back is the second part of Miner 2049'er. The game idea is the same. Bounty Bob needs to chase the rouge Youkon Yohan through a deserted uranium mine. There are various mutants about which Bounty needs to pass. All the framework parts of a level need to be filled by walking over them so Bounty can go to the next level. On his way he needs to collect watering cans, flower pots, pickaxes and much more.

Below are a few nicely coloured level screens from the game with elements as platforms, slides, lifts, etc. - fitting for a Jump&Run game of the early 1980's:

Do the following to jump into a higher level:

Enter 57,502 as special code in the options screen. Then press A  + F3 , then F7  to start the game. During the game now the following keys are available:

Rombachs C64-Spieleführer Teil 2: "Bounty Bob strikes back does not really strike back. Except for the menu and the highscore list everything stayed the same. To those who liked Miner 2049er this game can also be recommended. But it is not really something new. When released it was celebrated as a game sensation by different computer magazines. Voting: 3" 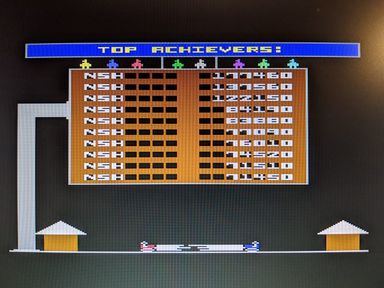