In Battle through Time you drive a small vehicle and have to fight through different worlds. At the first levels you have to avoid airplanes and their bombs and shoot them. Furthermore you encouter obstacles which you have to overcome. At the start you are in World War I, then in World War II. The third level happens during the Korean War, which is accompanied with the melody from M*A*S*H.

In the SID the melody of Star Wars is played, that's why I suppose that there is a corresponding "Star Wars-Level". However, the "Star-Wars"-thing is not quite correct. In the fourth stage (World War III?) you can hear the "Imperial March" from the 5th movie.

After the Korean War you get transported to the Vietnam War (1970). If you are successful again, you enter World War III. Then the world and the C64 are destroyed (only a joke from the game) . It continues with the War of Mutations, to finally get to the beginning of time. There you fight against flying dinosaurs, stone age men and devils (in any event some small creatures with horns that throw spears). The level ends with a end fight against a big dinosaur.

The game is multi-coloured and scrolls speedily from right to left. There are different pieces of music at each level. Sound effects are also there. Slight animations and level fading in and out can be found.

In the lower part of the screen is a status display, which shows the player in the first line (from left to right) his current points, the number of lives and the highscore and in the second line the time left, the name of the level and the miles already covered.

The game is operated by joystick in port#2:

In the selection menu you can choose a game in the beginner mode (level 1) or the advanced mode (level 8) for one or two persons or restart with the last level played (works only correctly in levels 1 to 14).

In each game you start with 5 lives, you have 500 seconds and you have to drive 10 miles.

The game is very difficult. If you want to see the end fight with the dinosaur, you should switch off the sprite collision and get there through the warp mode (possible with the emulator VICE). 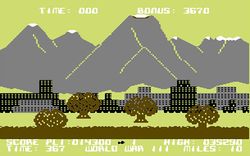 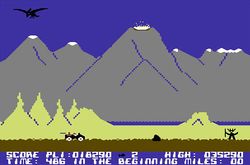 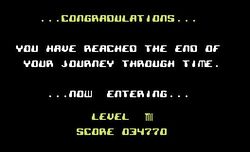 Generally: in every level drive quickly, shoot obstacles and flying things. Try to shoot missiles or avoid a collision with flying objects, so the vehicle doesn't get hit. Alternatively you can jump over small stones. You must jump over holes in the street!

POKE22045,255 and you have endless lives (donated by Roderic McBrown)

Sledgie: "The game is a clone of the classic Moon Patrol. As I have only been to the first level up to now, I cannot say anything about the other ones. The first impression is mediocre to good, so I give the game a 7."

Rombachs C64-Spieleführer: "It counts to the Moon-Patrol programs where much skill in the handling of the joystick and quick reaction is needed. The ones who don't have any game from this group yet are recommended Battle through Time."

Jodigi: "I love games like Moon Buggy. This version at hand is bloody difficult, although it doesn't look like this at first sight, but it is as gripping as the ur-version." 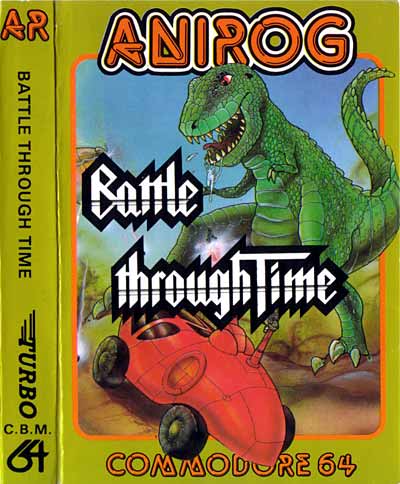 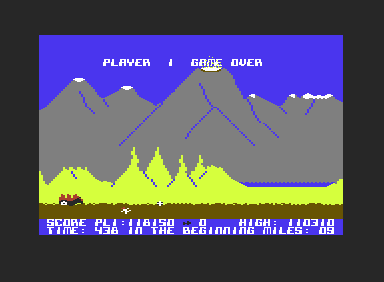