The intro sequence: a spaceship appears over the city and beams people aboard, including our main character...

A spaceship appears over the city and sends several beams down to the surface. A short time later it turns away. Apparently it abducts several people from Earth. Among them our main character. A little later, the character wakes up in front of a gate with rotating numbers. After passing through, the character finds himself in an unknown medieval town on a square with a floating gate. Unarmed. and unaware of where we are, we begin to explore the area to find out what has happened.

Alternate Reality - The City is the first part of a role-playing game series by Datasoft that was originally intended to have several episodes. Although the opening sequence suggests a science fiction setting, it is a fantasy RPG played in the 3D perspective. The series pursued quite ambitious goals. In the two completed parts, some innovative elements have already been implemented, such as the permanent death of the character, the extraordinary use of music with lyrics and various trait values that develop in the background. The second part, of the game originally developed for the Atari 8-bit machines, was also ported to the C64.

In addition to the two parts The City and The Dungeon, a total of five further sequels were to be created in the role-playing game world Alternate Reality. The titles of the planned games were announced in the manual of The Dungeon. They were to be called:

Game designer Philip Price, who had only received advance payments from Datasoft but not profit sharing, left Datasoft due to his precarious financial situation even before the final completion of the second part Alternate Reality - The Dungeon. He left his concept and the game idea to his partner, the musician Gary Gilbertson, and the developers Ken Jordan and Dan Pinal, who were permanently employed by Datasoft, so that they could finish the game for the Atari 8-bit computers and the C64. Datasoft was bought out some time later, and the Alternate Reality team was initially employed on a freelance basis, but then dismissed, so the series was never completed, nor were some of the ports of The Dungeon (e.g. for the Amiga).

The game world is explored in the 3D perspective. In the middle of the screen, a window shows us the city from our character's line of sight. The third above shows the name, the current ability values and status points of our character. The green double line of the panel contains descriptions of the location and also shows the music lyrics. The lower third is reserved for the current text descriptions and menus. Technically, it contains some sophisticated and innovative elements. The landscape changes in the dark, and it can rain in the game world.

Floating Gate: When walking through the portal, the character's base attribute is set.

The upper panel is surprisingly colourful in design. While its attractiveness is debatable, it has become a bit of a distinguishing feature of Alternate Reality games over the years. Visually, the game is not very appealingly designed and does not make full use of the C64's capabilities. Many of the graphics are very reminiscent of the templates from the Atari 400 version. The game allows switching in the start menu between a thematically appropriate medieval character set and a more readable classical CBM character set.

Music and sound effects are an important part of the game and are well integrated. The pieces by Gary Gilbertson are catchy and underline the mood of the game, even if they do not exhaust the musical abilities of the SID. One of the absolute peculiarities is that Gilbertson has written lyrics to the composed pieces, which are faded in every now and then in a kind of karaoke manner. By means of the little melodies during encounters with other NPCs, you can also tell whether they are hostile towards you or not. Game designer Philip Price had written an engine called Advanced Music Processor for the integration and visual synchronisation of the music. However, some compromises are said to have been made in the ports and not all elements from the original Atari 400 version were adopted.[1] 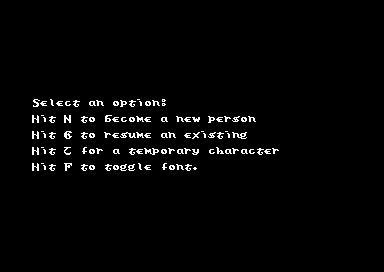 Start menu: The character set can be changed to a classic upper/lower case here if desired

The game is controlled predominantly via the keyboard. During interactions in shops or with NPCs, flashing initial letters in the lower information area of the screen indicate which key executes which command. When freely exploring the city, the following keyboard commands are assigned.

The character in The City takes comparatively small steps. So, unlike in other games, a forward movement does not correspond to advancing a complete square on the map.

In the game, many other commands are selected via key commands. In battles or in shops, the respective letter (usually an initial letter of the command) is displayed flashing within the menus in the lower half of the screen.

As usual in RPGs, your character becomes stronger by earning experience points and advances to different levels. You get experience for various things: adding damage points, killing enemies, but also finding potions or high-quality coins (not copper pieces).

Clothing, armour, equipment and food are bought in shops in the town of Xebec's Demise. The shops are subject to opening hours and the offer as well as the prices change daily. For overnight accommodation and regeneration there are inns, which vary in price. Weak characters should not travel at night in the beginning, as encounters are more dangerous then. Prices are usually displayed in copper, sometimes also in silver. The conversion to the currency in the higher-value metal is a factor of 10 (1 silver coin = 10 copper pieces; 1 gold coin = 10 silver coins = 100 copper pieces).

You get coins after winning fights or by selling items. If you flee from fights, it is possible that the opponent will steal coins or items from you as you flee.

It rains during the month of Rains. Beware: in bad weather, encounters also become less friendly...

In Alternate Reality - The City, weather and times are simulated realistically. One hour in The City corresponds to about four minutes in real time.

As an inexperienced character, you should not roam the city at night, as encounters with dangerous creatures become much more likely. The same applies in bad weather. Rain and the glaring sun have been visually well represented in the game. Also, the landscape becomes much darker the deeper you travel at night. Inappropriate clothing (For example, going naked in the cold or rain?) is also said to affect the character. There are seasons in the game that affect the frequency of rain or sun. If you want to know exactly what time it is, you can ask the time in the inns. In the game, the abductions count as the turning of the times for us.

The year in Alternate Reality consists of 12 months, each with 30 days of 24 hours.

The game begins on the 30th day of the month of the rains in year 1 since abduction. 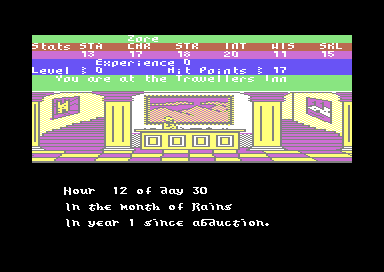 Inns are not only important for rest. You can also find out what time it is here.

Inns are important places to go in Xebec's Demise. You can regenerate lost hitpoints by staying here. They are also the only possibilities in the game to get information about the exact time. The inns offer rooms with different levels of comfort at different prices, but the prices of the inns also differ from each other. Especially at the beginning of the game, it makes sense to stay near the inexpensive inns. Inns are open around the clock. 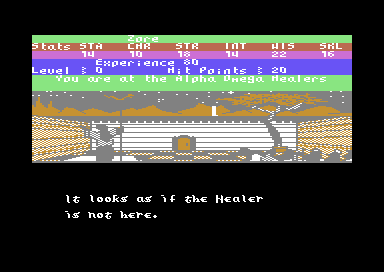 Typical healer. Never there when you need him...

Healers are an important place to go to heal from poisonings and plagues in The City. However, healers do not have fixed opening hours, so it can always happen that you are standing in front of a closed door despite a medical emergency. Prices also seem to be random or dependent on the level of poisoning/contamination and can range from 200 to 800 copper pieces. 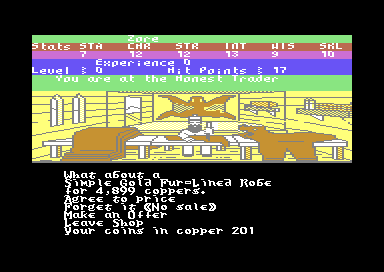 Shops in Xebec's Demise primarily offer clothes for sale. However, you will also be offered a compass for 5 silver pieces (50 copper pieces) - usually when you leave the shop. The clothes the character wears are supposed to influence his perception by other NPCs. 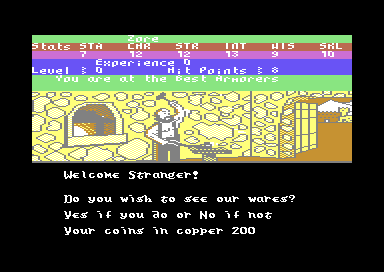 Best Armorers - The Armor Shop at the Floating Gate.

Blacksmiths are among the most complex sellers in the game. They recognise the character's disposition and can raise prices if they don't like us. The opening hours of the blacksmiths vary greatly. The offer changes regularly. If you make too low an offer when trading, you can be thrown out of the shop. 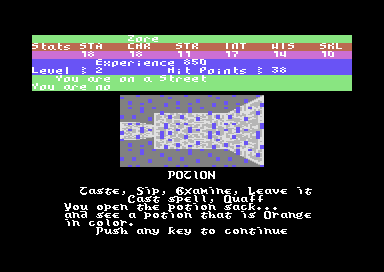 Swallow or don't swallow? What could go wrong with an orange liquid?

In Alternate Reality The City there are a total of 44 different potions with different effects. With some experience, you can try to recognise potions by their colour and taste (examine, sip - see tables below). However, the effects - positive and negative - only take effect when you empty the potion in one gulp (quaff). Below is a list of potions sorted by effect. For some negative effects there are potions that neutralise them. As a general rule, however, you should consult a healer. Which effects are currently affecting the character can be seen on the status screen (F7). Effects usually last for several hours. Gremlins often carry potions with them.

Due to the large number of potions, it takes a lot of effort to decipher them by trial and error. The procedure is as follows: First, remove the seal and examine the colour. Then you taste the potion to get a second clue about the taste. From the combination of both characteristics, you can tell which potion it is. However, there is no hundred percent certainty, as some combinations occur in several potions. Below is a list of potions sorted by colour and flavour.

Since the further sequels that would have been necessary to actually solve the game never appeared, the game is not solvable in the true sense. There are no quests to complete. You cannot ultimately win, but only explore the town. The City is ultimately about survival and exploration. The actual goal is to create a strong character to have better chances of survival in the following part Alternate Reality - The Dungeon.

The manual contains a started map of Xebec's Demise. The starting point of the game and one of the safer areas is the marketplace in the middle of the map around the Floating Gate. The map of The City is 64x64 squares in total. For the coordinates, count up from the southwest corner. So the first box at the bottom left has the coordinate 1/1 (or 1E / 1N). 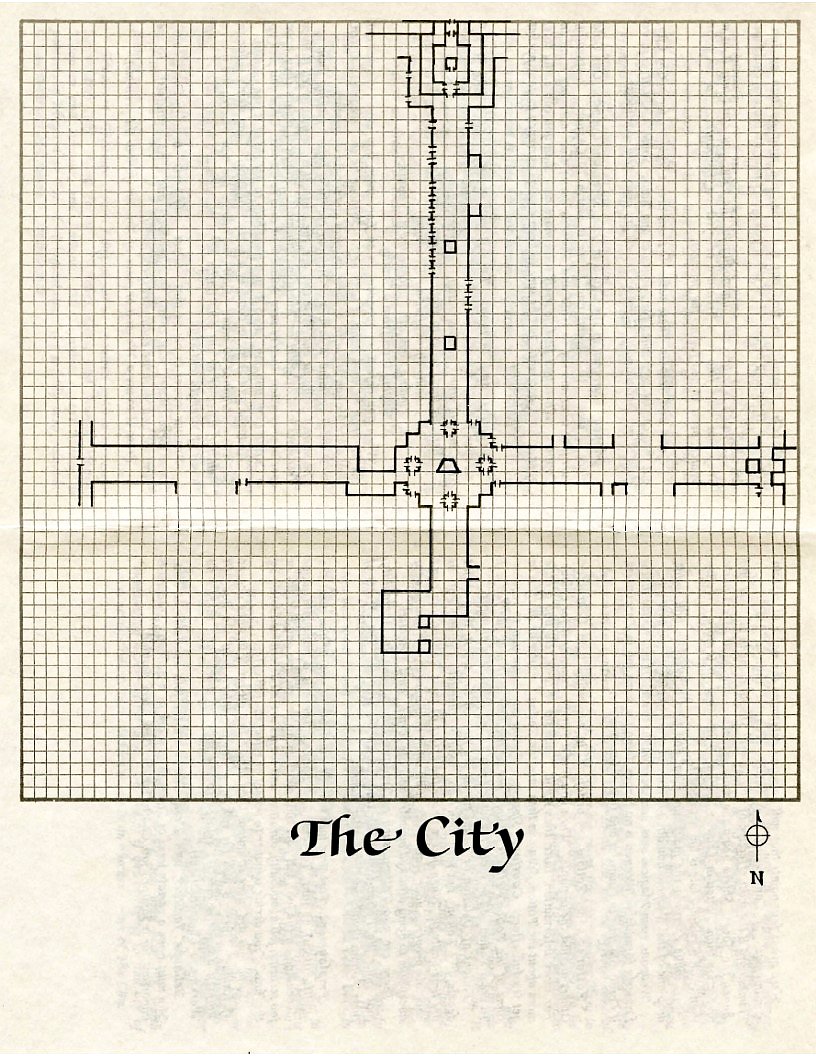 First orientation. This started map is included in the manual...

There are no known cheats.

Zore64: "Alternate Reality - The City is the prelude to a series with great ambitions and many good ideas, which unfortunately was never completed. On the Atari 8-bit computers, the series enjoys iconic status - though surely also due to the lack of competition from series like The The Bard's Tale. The City suffers from several additional flaws. Actually, the game should have formed the first part of the series together with The Dungeon, but was split for commercial reasons in order to enable the delivery of the ports before the Christmas sales. As a result, The City loses a lot. With no quests and no goals, it feels like you're moving through a preview. In addition, the very simple graphics and the high difficulty level spoil the fun. In the sequel, The Dungeon, many things are already much better, and you get an impression of what a fantastic series "Alternate Reality" could have become." 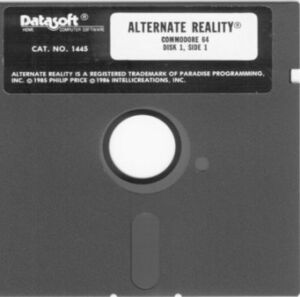 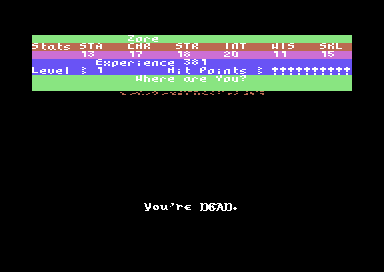