It was the first video game about the famous Autobots, which are fight against the Decepticons. In this game the player controls one of the five Autobots: Optimus Prime, Hound, Jazz, Mirage and Bumblebee. These Deceptions are in this game: Megatron, Soundwave, Starscream, Buzzsaw, Skywarp, Laserbeak, Ravage, Frenzy and Rumble.

The energy of the Autobots are down, but you can they save by collecting four pieces of the Autobot Energon Cube and transporting the complete cube back to their centre. The Decepticons will you attack and try to destroy the Autobots. You can only win a level by playing the five as a team!

The ending of the autobots...?

The first C64 game of The Transformers is a hectically shoot'em up.

This level map of the Spectrum version is identical with the C64 version.

Shmendric: "A relatively simple gameplay, but the level of difficulty is really not easy. Especially when flying, it's easy to hit a platform and lose one of its precious robots. This is a very difficult game, especially in breakneck flights due to the lethargic reaction. Converting to a car seems to me to be absolutley useless, because the higher speed does not outweigh the the missing weapon. The very reduced field of view in running, flying or driving direction adds another part to the frustration factor - this game should have been worked on for a while - if some details had been implemented a bit more convenientably for the player then might It's even a bit of fun, but that's the thumbs down." 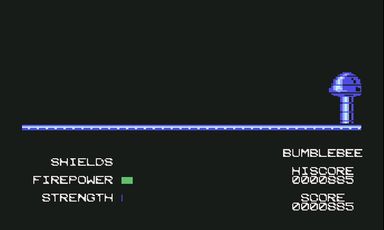