Think Cross is one of the many Puzznic clones, that there are for the C64. It is always about pushing together stones with the same symbol. If this is done, they dissolve. The stones are subject to gravitiy, i.e. if you push them over the rim, they will fall until there is ground below their flat surface. The clear aim is to clear away all labelled stones within a time limit. There are 150 levels to fight through, with level sections. A level section consists of 5 levels. Each section differs graphically from the other and at the end you get a password to be able to enter the game again at this level. Different items facilitate or aggravate your task, as e.g. moving bridges, lifts, fragile floors, etc...

Looking at the effort necessary the team of programmers was probably not under time pressure, which has a very positive effect on the game. As it contains many nice graphic sets, it has to load very often, but this takes not much time. The controls are also important, they are fluent and soft, you can set three speeds F1  - slow, F3  - standard, F5  - fast. The sound is probably more a tootling - but does not disturb. There are more superior compositions by Markus Schneider. It is very good that you are able to go on playing from the last level that you could not solve. In each level section you can jump one level (F7 ), if you think you cannot make it. Each fifth level is a bonus level and does not need to be solved. Here you get 200 points per eliminated item. Rumour has it that there are also secret levels where items behave totally different than in normal rooms. But whether this is only a rumour ...

. If the cursor is placed over a brick and the joystick is moved with the pressed fire button

Some explanations for the displays on the screen: At the far left, the bricks are listed with their number that are in the current room. At the upper left there is the score, in the upper middle the time limit and at the right the current level. At the far upper right there are two numbers - the first shows the number of help functions. With the key H  you can restart a level, but the countdown is not reset. The second number shows the number of bombs that you can gain in the course of the game. There is a bomb each 30.000 points, with which you can bomb away stones that are left (with Space ). There is also a pause function, use key P . With Run/Stop  you can abort a level.

H.T.W: "A basically simple but intelligent game idea that really challenges concentration and mind, and this in a good technical realisation. Unfortunately, the highscore list is not saved. Nevertheless a good puzzle game with many extras and tricky levels, needs to be tested absolutely.. ". 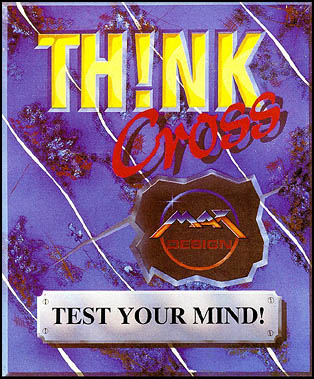 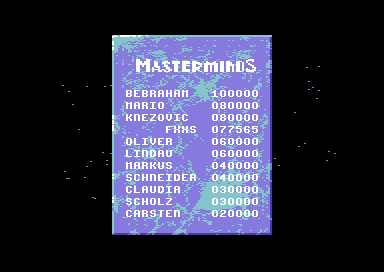