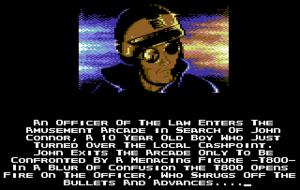 "Terminator 2 - Judgment Day" is the official video game for the release of the second coming of the Terminator film series. Also on the cartridge edition was the "image system" and "modern music maker."

The game was set in stages in which objectives were needed to be completed without the player dying. The levels consisted of fighting/shooting, obstical driving and working through mazes. The levels each had unique graphics but is essence the same gameplay. 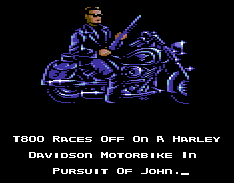 Really cool in leather, with sunglasses, motorcycle and shotgun...

5000 points are awarded for each level completed 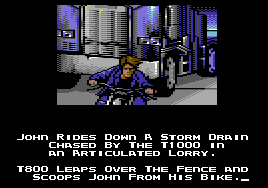 Use the fire button to select a block. Then use the joystick to navigate to the block you want to swap.
Bonus points: Time remaining x 100

Various points for each opponent

Use the joystick to steer in the next blocks direction, who should be moved onto the open field.
Bonus points: Time remaining x 100

Zzap!64 from October 1991: "This is the slickest cart yet with a great intro and excellent bitmaps keeping the game together far better than any Ocean game yet. C2Ners don't have the pleasure of the pre- and post-level bitmaps but at least the intro and end bitmaps are in there. As for the actual game I found it slightly disappointing for what is a major Ocean product; there just isn't that much innovation. However, the levels are very well crafted with pace and quality graphics, the subject is a sure-fire winner and the variety of gameplay should appeal to all. I particularly like the SWAT van and Cyberdyne levels, so it's definitely worth getting!" (unknown editor)

Shmendric: "Graphically, it all looks really nice, the sound is a bit frugal, but not really bad. The SID version of the movie theme was successful, but then the music programmer went on vacation.
Ocean is well known for: Take a movie, divide it into 5 or 6 different single games and then add the whole thing back to a threadbare program with a lot of reload and frustration factor. What should be varied, just does not quite fit together. Contrary to the opinion of the Power Play editor, I found the MS-DOS version much easier to play. Certainly is not a game where you start choking, but I never really felt like spending time and concentration on this program. Two bonus points for the sometimes quite attractive graphics, and one because I like the movie. With such an idiosyncratic bill, a suboptimal game like Terminator 2 can earn whole 4 points."

This is a sequencing based music software allowing composition of music using the SID chip. The program consists of a main pattern sequence page in which patterns can be written and a live music/instrument editing feature. Both were simple to use and controlled by the user input from the keyboard, predominantly using the F keys to change values in the instruments to generate the sound and typing number values into the pattern sequences.

In this Longplay, DerSchmu terminates everyone and anything in all stages... 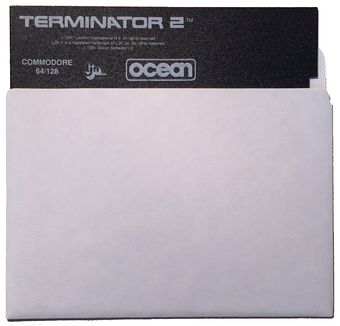 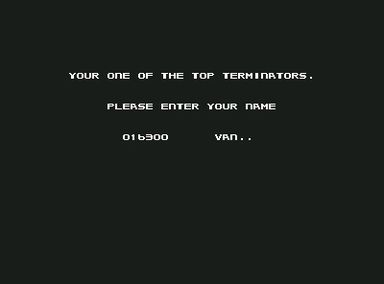