The two opposing spies from the "MAD" magazine, "Black" and "White" meet in this game for the first time on the C64. Both have the mission to steal secret documents from a foreign embassy and then reach the waiting airplane on time. The player can compete against the computer or a human opponent, which of course makes the whole thing more interesting. Every spy can move independently from the other through the horizontally parted screen (split screen) and make his action.

In one of the rooms of the embassy in one of the fitments a briefcase with secret documents is hidden, which poses the main aim of the spies. But as there is only one exit in the building and this is guarded by a security agent, the briefcase must be filled with the following four items to satisfy him: passport, money, key and secret plans. The found items are shown at the right in the box and flash when they are inside the briefcase.

As also in the comic, the two spies have the possibility to set traps for each other. There are bombs or steel springs that can be hidden, spring guns can be built, acid canisters can be put on the top edge of the door or a time bomb can be laid down. But for almost every trap there is also a remedy: umbrella against the acid, pliers against steel spring etc. Only the time bomb mercilessly explodes after 15 seconds. Certainly every spy can also walk into his own trap, that's why you should keep in mind where your own traps are. Such a trap doesn't cost a life by time units.

When both spies enter the same room this can degenerate to a wild stick fight. If the spies have carried items, they will be lost in this room and the winner can search for them in the end. You can also take away the filled briefcase from your opponent and then break away as quickly as possible, which surely will delight the opponent sitting next to you...

The screen is split in two. In the upper part plays the white and in the lower part the black spy, at the same time two players or one player against the computer. The rooms are shown in pseudo 3D design. When both spies meet one screen is switched off. The design is functional, nevertheless comic-like and funny (especially when a spy walks into a trap) and also the animation when a spy has won the game is designed "MAD"-like.

This is automatically called up when both spys are in the same room. During this time the trapulator cannot be used, but doors can be opened (and by this you can take flight). If the spys get close enought they can fight each other with sticks.

It is placed at the right next to the screen part of each spy and contains the four basic functions: at the very top a digital watch going backwards shows the time left, below that there are six buttons, the first five (bomb, spring, bucket, pistol with rope, alarm clock) are for choosing the traps, with the sixth button an overview map can be called up with which you can determine your position in the building (the room in which you are flashes, the rooms with a dot contain the desired items) and in the lower line the found items are shown (passport, money, key, secret documents). All four items in this line must be flashing, i.e. they need to be collected when the spy holds the briefcase in his hands (grey case), then the exit to the airport can be used.

To put down a trap and activate it:

Sledgie: "First part of the 'Spy vs Spy' trilogy on the C64. Fans get their money's worth. The game needs a bit getting used to. In the 2-player mode it is very funny. Godd conversion of the 3D graphics for the C64."

Alex (AL71): "The 2-player mode is really great!! :-) But it got boring as I found out first, that you can easily defeat the other spy in the stick fight by keeping the fire button pressed and unhurriedly moving the joystick up and down ;-)."

Klaws: "in principle it is a nice game, especially the building and installing of the traps seemed to be a funny thing. Amusing and entertaining. Unfortunately, the game is reduced to a (very simple) wild beating-up, as soon as you meet the opponent... the one who beats the better wins. Pity."

Rombachs C64-Spieleführer Teil 2: "Spy vs Spy is a sophisticated action game with a game idea and implementation that can hardly be topped. The one who wants to collect all items in a well-behaved way, will garner nothing but mockery. (vote 2)" 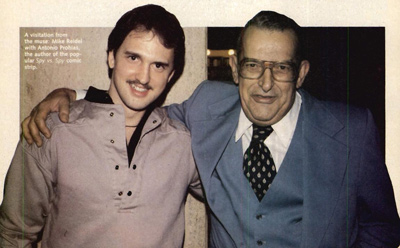 Programmer Mike Reidel poses with the cartoonist of the Spy vs. Spy comic strips Anthonio Prohias for the camera. 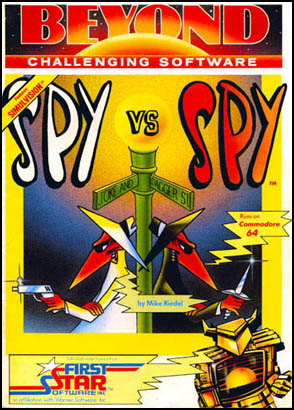 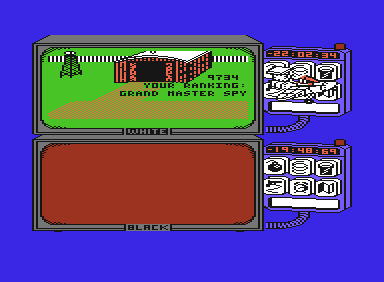