Spots is a variant of the famous gamble game Yahtzee. It can played with 2 to 4 players over the joystick in port 2. A single player can play, but they must be accompanied by at least one computer player.

Spots is a solid dice game. It looks like programmed in BASIC with sprites (the dices and the hand cursor) and the normal C64 character set. A few sound effects and soft animationed sprites are also there. 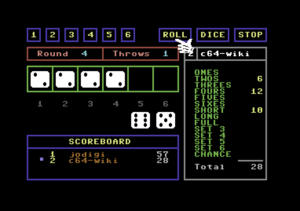 The idea of the game is to strategically roll the dice and bank the scores at the end of the turns such that you score as high as possible, and higher than all of the other players.

A bonus of 50 points is awarded for any player that scores a total of 69 points from the sum of scores in the categories Ones, Twos, Threes, Fours, Fives, and Sixes.

A bonus of 25 points is also awarded to each player on the completion of the game, however 5 points are deducted from this bonus for every score banked as a 0.

No highscores in the game