Shamus is an actionadventure by Synapse Software which was ported for the C64 in 1983. You need to search the labyrinth-like complex for keys and locks and by this open new parts of the map. The aim of the game is to reach the villain "Shadow", which lurks for the player. Hordes of enemies and electric walls confront the player with nearly unsolvable problems. The game is a consistent continuation of the arcade hit "Berzerk".

You've finally made it. Your nerves and your guts tell you he's here... and the smell. The sickeningly sweet ordor of decomposing fruit; the SHADOW's trademark. Now all that's left... to find and destroy him before he returns the compliment. You didn't know it was going to be this hard. After all, it is the 21st century and your ION-SHIVS are probably the most dangerous weapons in this part of the galaxy. They can drop a fully screened sniffer-droid at 300 meters!

Out of the corner of your eye, a small black shape darts up to the door and noiselessly enters the builing across the rocket pad. The memory of your last encounter with the Shadow jolts you, like a neuro-stunner set on max. Images of ROBO-DROIDS, that just don't know when to quit... dark, sneaky WHIRLING DRONES from a timeslip star system... and the lightening quick SNAP-JUMPERS, that fry you for looking at them cross-eyed, flicker through your mind. Still you've handled them before... The big boy himself, SHADOW, is the one you're after!

As you silently enter the door coordinates into your teleporter, the scanner indicates that there are four colored levels of 32 rooms each, and every room is bristling with danger. You know it won't be a high school prom when you transport into the Shadow's lair, but there is no turning back. So with a grim chuckle, you reach for the bottle of Nervo-Stim and energize the transporter. You're ready as the Stim slides down warmly and your biosensors click into high gear! TELL THE SHADOW THAT SHAMUS IS HERE! 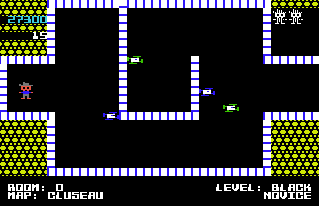 The first room does not arouse even the faintest suspicion to what a whopping task lies before you.

To successfully play through Shamus, (which is theoretically (!) possible) the hero of the game needs to be guided through 4 levels with each 32 rooms and unlock new sections with the help of keys, where again he has to find new keys and locks. The levels are named after colours: black, blue, green and red. In the last room of level "red" the Shadow waits for Shamus.

The rooms are guarded by a random number of enemies that rises during the course of the game and after reentering the room it is filled up again. The walls contain high voltage and must not be touched.

The game has four difficulty grades (Novice, Advanced, Experienced and Expert) as well as four versions of the original map, that carry the names of secret agents and detectives (Marlowe, Cluseau, Holmes , Bond).

It's still the same old story - A fight for love and glory - A case of do or die - As time goes by.

Shamus is a game from 1983, which can clearly be seen. The graphics are kept simple and functional and serve their purpose, the number of possible enemies that you face at a later point in the game is remarkable. One is quasi flooeded by enemies in the style of Gauntlet - this is respectable for such an early game, the more so as they are all animated. The wallpaper-like patterns of the unused screen area and the animated walls keep the rooms from a too big optical monotony.

The intro by Synapse before the game is done extensively stylish regarding the time of creation, futuristic sounds and a glossy effect make it stand out of the masses of what was common at that time.

The sound effects in the game fit the happening.... hissing shots and explosions, droning and electric strikes are realized convincingly... it "zaps" and "woooshes" everywhere. When a question mark is collected, several beats of "As time goes by" from the black and white classic "Casablanca" sound.

As title melody, the "Marche funèbre d'une marionnette" ("Funeral March of a Marionette") by Charles Gounod was chosen, known amongst other from the crime series "Alfred Hitchcock presents" Video at YouTube .

walk into all directions

fire the weapon into the corresponding direction

At least the game has actually an end...

In the last room of level "red" (#127) the Shadow awaits the player motionlessly, which then can give him the finishing shot. For all the work one is then awarded with the following scroll text:

OK, SWEETHEART, YOU MADE IT. IT WAS TOUGH AND YOU NEARLY GOT KNOCKED OFF A COUPLE OF TIMES
BUT THE BAD GUY GOT HIS IN THE END AND YOU MADE IT THROUGH IN ONE PIECE.
SO MAYBE NOW YOU THINK YOU'RE SMART. MAYBE YOU ARE. BUT MAYBE YOU JUST GOT LUCKY.
ANYWAY, LIFE AIN'T ALL DAMES AND GLORY. YOU LEFT SOME UNANSWERED QUESTIONS BACK THERE.
SO IF YOU DON'T GET BACK IN FRONT OF THAT JOYSTICK WHERE YOU BELONG YOU'RE GOING TO REGRET IT.
OH, MAYBE NOT TODAY. AND MAYBE NOT TOMORROW. BUT SOMEDAY...

HERE'S LOOKING AT YOU, KID.

The version by WANDERER offers the possibility to switch off the collision with deadly objects and has a highscore saver.

Robotron2084: "Shamus is without question a classic, but a classic, which was ruined by a murderous difficulty grade. One could probably get over this, but it is joined by noticeable weaknesses in the collision query, which make the own shots glide through the enemy without any effect while being in an especially precarious situation. But the own figure only needs to be hit at the tip of the hat and a life is gone. And it is also really annoying that one is placed right into an enemy when entering the room - happens seldom but often enough. And these things are just poor and very a shame, because otherwise Shamus is a really great Berzerk clone with nice ideas and enough own character. I always play Shamus although I know in advance that I will get incredibly upset about these really stupid bugs. Therefore only 6 out of 10 points."

First, Shamus was published for the Atari 8-Bit, and then ported to many other systems. 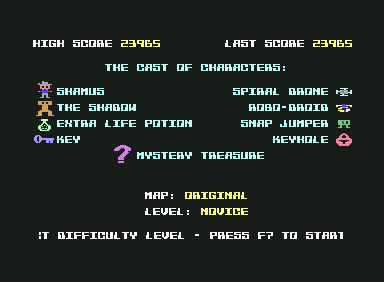