In Radar Rat Race the player plays the role of a blue mouse, that has to search for cheese in a labyrinth within a certain time. To make it a bit harder, you are followed by several red mice which bring you certain death when you crash into one of them. As the red mice outnumber you, you should take into account that you might get encircled by several mice. A further peril are the black cats, which lure behind some of the corners. Into those also the red mice can run, but they are only delayed by the cat and not killed. With a "Star Screen" - a trace of stars that can be left behind by the blue mouse - you can temporarily disable followers which are too close.

When you have collected all the cheese in the labyrinth, you reach the next round. With every round the number of cheese slices and the enemy mice is raised.

For a better orientation in the labyrinth there is a "radar overview" in the window on the right:

Unfortunately, the black cats are not shown on the radar.

The design is kept very simple. The actual game takes place in the left window, which only uses half of the screen. Through this the sight is very limited. The radar window is even smaller, this makes everything look a bit lost. The mice, cats, the cheese and the walls in the labyrinth are only displayed stylistically.

During the game a simple melody constantly plays in the background. The collecting of cheese, crashes, the succesful finish of a level and the use of the Star Screens are accompanied by effects. 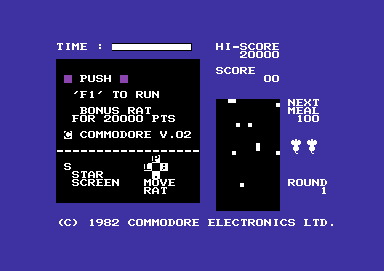 L  - moves the mouse to the left

With joystick in port 1:

- moves the mouse to the right

- moves the mouse to the left

For the first slice of cheese that you pick up there are 100 points, for the second 200 points and so on. If you lose a life, the counting starts again at 100 and is shown at the right of the radar screen (Next Meal). If you collect the slice of cheese with "2x" written on it, you will receive twice the points that are displayed when collecting the next slice of cheese. When a round is finished, the time left is converted to points.

When the time is over, the player is abruptly stopped, whereupon he gets hit by a red mouse most of the time.

Camailleon: "The music is a bit nerving, but the game principle is rather nice and the design of the little mice also. Unfortunately, the difficulty level is a bit too high for me, as the enemy mice are quickly close on your heels and the sight is very limited."

mombasajoe: "One of the worst pieces of software that I have ever deleted."

Shakermaker303: "It is not thaaat bad, for the year 1982 it is just bearable. Well, it gets boring rather quickly."

blubarju: "There are better games by Commodore. But this game is rather nerving. Even though the game idea is quite nice. Only 3 points from me."

Borna: "Guys, you are totally wrong. This game was the second cartridge (!) of my big brother and it seemed to me gigantic in its dimensions. The speedruns were great and the variations in the levels add to the diversion. The only point of critique was the intensly rising difficulty level and the maybe a bit nerving music. But at that time we thought that was fantastic, be honest." 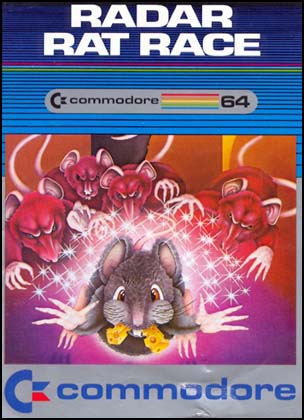 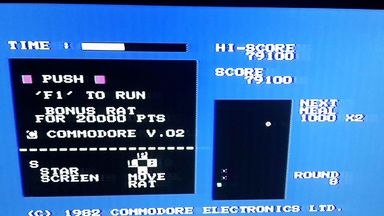