Start up check at day 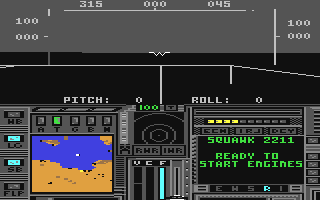 Start up check at night

Project: Stealth Fighter is a simulation game from Microprose. The player can select from 4 campaigns: Lybia, North Cape, Persian Gulf, and Central Europe. Mission types depend on the conflict level selected (Cold War, Limited War and Conventional War). The player selects the type of equipment/weapons for the type of mission to be flown. Examples: A recon mission would require a camera and possibly extra fuel. A bombing mission would need the type of bomb required to successfully accomplish the mission.

The main aspect which sets apart this flight simulator from other flight simulators of the time is that it is the first simulator for a stealth fighter. The players has the role of a Pilot who has to successfully complete mission in enemy countries. These include spy missions, where the player has to enter enemy airspace and fulfil his mission without being detected by the enemy.

The game was considered to be a landmark in AI development on release. The AI would only pursue the player aggressively after he was discovered. SAM batteries and enemy fighters offer a very realistic and most notably believable behaviour, for the time. The radar detection was remarkable, as well. The outcome of a mission can thus take a totally unexpected direction, depending on the player's actions and the interplay of all factors, like radar detection. Possible outcomes include rescue by a V-22 Osprey, a report on the pilot's arrest by a Soviet news network, or a formal complaint by an allied or neutral nation, whose planes have been destroyed. The pilot's file records all mission points. Depending on the outcome of the mission, the following missions are changed, which gives the game the feel of a campaign.

The game shipped with keyboard overlays, a combat guide for stealth plane as well as detailed maps for the theatres of operation. These extras were not included with the re-release, which was published under the the title F-19 Stealth Fighter.

Start up checks and ammunitions

Die game's graphical design is according to its time of release. Intro, menus etc. are very nicely done. The intro is impressive, as well. MircroProse's programmers and graphic artists have clearly put a lot of effort into it. Brilliant graphics cannot be expected, however. Some games back in the day had already immense graphical fireworks to offer, this simulation is, however, lightyears away from such a thing, as the emphasis is on simulation and not graphical design. The design is very modest especially during missions. The cockpit is in no way even close to a real-life cockpit. The screen is split up into outside view and cockpit instruments. The design of the cockpit's instruments is very functional. All instruments well-are arranged so that the player can read all important instruments immediately. The display can be noted to stick out, which shows a relatively broadly designed map of the surroundings.

There is also a HUD in the windows with the outside view. It shows important data, like current height, and a cross-hair. Further data relevant for flying is also displayed there. As with the instruments, the design was more focused on playability than realism.

The simulated environment looks very sparse, as expected. Things are always blue and green, depending on whether you are above ground or water. Objects consist of black vectors. This includes vehicles, buildings and heights.

On a C128 the disk version starts automatically after booting your computer. 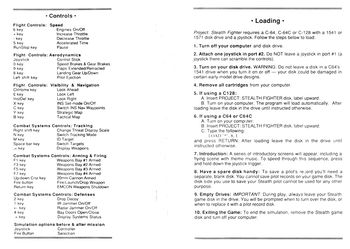 There is a trick in case you run out of fuel and the nearest basis is out of reach. Drop the remaining bombs, containers etc. you're still carrying, everything except the cannon. By this, the plane becomes to light that you are able to reach the nearest basis by gliding, and then land. On the downside, this methods has a hughe impact on your speed, and you become almost a sitting duck for enemy fighters. 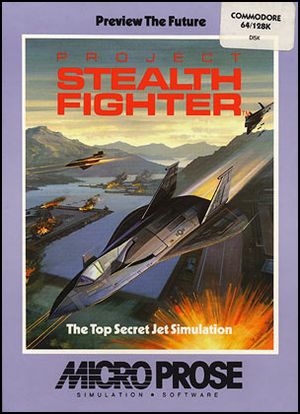 The F-19 does not exist. Due to its volatile content, the game was used to spread misinformation. During development, MicroProse's offices were frequented by the US secret service to ensure that MicroProse did not have any access to confidential documents. The US Air Force deliberately spread fake data about on fictitious jet fighter in order to distract from project F-117a. Aside form MicroProse, fake data was also handed to bestselling author Tom Clamcy, who described the F-19 Ghostrider in one of his books. There even is a model set (sacle 1:72) the by Revell. It is known that the Soviet Union procured several copies of the game.

The F-117a was already brought into service at the beginning of the 1980s, but it only became widely known through the second war in the gulf, after the jet was presented to the public shortly before. In contrast to the fictitious F-19, the F-117a is only equipped with bombs, but does not have any other weapons. Thus, the classification "F" for fighter does not correspond to the general designation system of the US Air Force. A version 2.0 of the game, called Night Hawk: F-117A Stealth Fighter 2.0, was released for Amiga and PC for that reason. The game did not see a lot of changes, it was merely adapted to the properties of the actual existing plane. 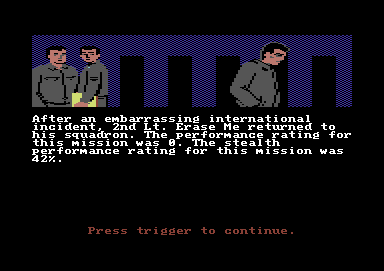