Pool of Radiance is the first role play conversion on the C64 that is based on the official Dungeons & Dragons rules. With eight disk sides this was one of the most comprehensive games of its time. It is situated in the Forgotten Realms world and plays in the town of Phlan. At the beginning of the first game you put together a party. You can choose from six different races (dwarfs, elves, gnomes, halve elf, halflings and humans) and four character classes (fighter, cleric, thief, wizard). Non-human characters can also belong to several classes (e.g. fighter-thief). The character classes decide on which weapons can be used in a fight and which armour can be worn. Clerics e.g. use only blunt weapons, thiefs do not use bows and wear only light leather armour. Magic can only be used by clerics and wizards, but they need to remember their spells by heart before the fights during a rest. The group can also recruit experienced NPCs for their adventures. During the fights you get experience points, by which the characters' fighting power and life points rise and mighty spells can be used. Additionally, the group can collect the enemies' weapons, armour and treasures after a victorious fight.

The old trading town Phlan is in ruins. Only a small part, New Phlan, is inhabited by humans, the biggest part is in the hands of evil creatures. The councillor of New Phlan plans a rebuilding and recruits adventurer to banish the monsters from the adjoining ruins. On the search for treasures and adventures the party sets out for the way to Phlan. All characters start very inexperienced in the first level. For a share of the booty, experienced campaigners can be recruited in the training building, before you set out for the first explorations in the western Slums. 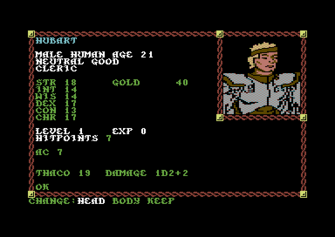 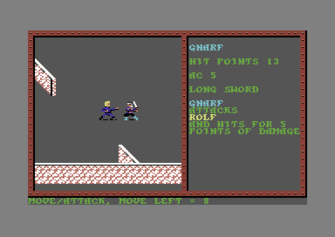 While the party explores the area, you watch the game in the first person perspective in a window to the upper left. There the landscape in front of you is displayed in 3D. Also images of NPCs that you meet are shown here. To the right is the overview of the characters. Here their name, armour class and current life points (hit points) are recorded. While wandering around this window also shows additonally the direction into which the party looks, the time and the position coordinates.

The game can be controlled either by keyboard or by joystick. The lower third of the screen is covered by the text field with the descriptions and dialogues. By a text line at the lower part of the screen commandos are chosen or you can navigate through the menus with further options.

When battles happen the game switches to an enlarged section of the map, in which the strategic fights are carried out. Each character can make a certain number of movements each round, depending on their skills, and make one action (attack/spell). The engine of the game simulates the rules of the 'Dungeons & Dragons' board games, so the events (e.g. caused damage in the fight) are 'tossed with a dice' within certain random parameters. Some of these parameters are also shown in the character overview, e.g. a weapon that can cause 1D6 damage, causes the hit points of damage in the fight that correspond to the numbers on a thrown six-sided dice, so 1-6 points.

... the camp. Time heals the wounds and allows to learn spells. ... 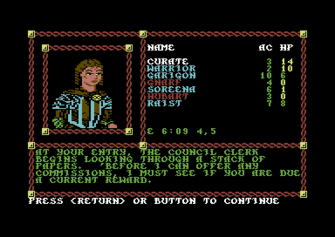 ... The town council in New Phlan allocates missions and awards. ...

For each victorious fight the group will get experience. In the training room in New Phlan clerics, wizards and fighters can get tested by the corresponing master to rise one level. However, there are costs of 1.000 Gold Pieces (200 Platin) for the training. Characters that belong to several classes (e.g. fighter-thief) will get very mighty in the later course of the game, but they rise significantly lower in the levels, as the experience points are shared between the classes. While a mere thief gets e.g. 100 experience points after a fight, a fighter-thief will only get 50, members of three different classes correspondingly only get a third of the experience.

Also the threshold for entering a new level differs. A fighter-thief can rise to the second thief level with 1800 experience points and will be shown as level 2 character in the view, but he will only be able to practice the skills of a level 2 fighter when he has reached the necessary level there. 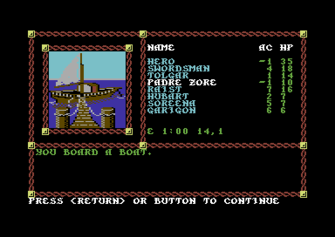 ... After Sokol Keep you ferry across the water with a boat to the island Thorn. ...

The maximum level that characters can reach in Pool of Radiance is due to certain restrictions dependent on race and class. Humans are not affected by this and can gain an indefinite number of levels. Furthermore, some races cannot do some professions at all. You should consider these restrictions when creating a character. A human cleric for example will outclass a half-elf cleric in potency and fighting power in the later course of the game. To rise a level the characters need to enter the training room, there the master of the arena decides about the promotion.

Clerics and Wizards have a different choice of spells available. Before they can use them in a fight, they have to be learned by heart during a rest. The number of spells that the character can remember is limited, but rises with every level. Wizard do not have all of the spells of their level available, but only those that are written into their spell book. You start with four level 1 spells. However, in the course of the game new spells can be transfered from spell scrolls to the spell book. Clerics do not need a spell book, they know all spells of their level from the start. Some spells are time-consuming and complicated, so they cannot be used during a fight, but in the camp. Even during a fight some moves can pass from the beginning of the conjuration until the spell is finally spoken. If a wizard is disturbed during the phase on conjuration, the spell will expire. Vice versa, also the opponents spells can be disturbed by e.g. hitting them with a dart before the formula was finished. 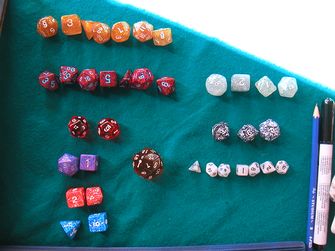 ... Original D&D set of dice, as it is simulated by the engine in Pool of Radiance ...

The damage that weapons will cause in the fight, is 'decided with a die' by the engine according to the rules of the 'Advanced Dungeons & Dragons' board game. Certain weapons additionally have bonuses or deductions when used against monsters that are bigger than humans. E.g. a dagger causes 1D4 damage when the attack is successful (against an enemy of human size). The 'D' is for 'dice', so the caused damage corresponds to the number on a thrown four-sided die, so at least one and a maximum of four hit points. A broad sword causes a damage of 2D4, so the sum of the numbers of two throws with such a four-sided die. The caused damage is in any case at least two and a maximum of eight hit points. In close combat further points can be added if there is a corresponding strength value. In the following tables the damage points of some selected weapons are shown in the effective sum.

Long range weapons
Long range weapons are an important tactical instrument in the fights in Pool of Radiance. However, they require ammunition (stones, arrows, bolts) that need to be refreshed. (Exception: stones for the sling can be simply picked up on the spot). With them, weaker characters can act from the safe background. At the same time they are used against enemies that themselves are out of the close combat reach or are on the run. They also have a great significance in the fight against the hostile wizards that act mostly in the background, to keep them from casting spells. (A hit wizard cannot concentrate enough in the round after being hit. Even though he will be interrupted only during the conjurement, the spell will expire.) Fighters should always carry the best bow that is available with them. Bows have the advantage over the crossbow that you find more often arrows than bolts after fights, so its easier to refill your ammunition. Each thief should have a sling with him, a wizard enough darts. Though the sling and the darts only cause little damage, they are enough to hunt down stricken or helpless enemies or to prevent a wizard from casting a spell.

Heavier armour protects characters from the enemies' hits, but they also restrict his mobility. For this reason thieves only wear leather armour, wizards wear none. A shield lowers the armour class by one point. The lower the armour class, the less the damage of the enemy when you get hit. In the course of the game you will find enchanted armour that offers even better protection.

The maximum amount of coins that a character can carry is limited in Pool of Radiance by the weight and this also strains the mobility. Additionally, in Pool of Radiance circle different types of coins. The relation of weight and value is best with gems, however, they can reach different prices when exchanged in shops. In the later course of the game it is not worth any more to pick up the copper coins in the booty. Gold is the unit in which is measured how much an item weighs and a character can carry.

The Civilized Area of New Phlan is the base camp for the group. From here the adventure starts and the party always retreats here to stock up supply, train and pocket the pay for the gained maps at the City Council (10). The first experiences are made by the party by cleaning the Slums adjoining to the west from monsters. Captured bows and armour bring good money in the Weapon Shop (5), you should not burden yourself with items of low value as shields or swords.

The Slums count as cleaned as soon as you have freed all rooms from monsters and absolved 15 random encounters. Ohlo (3) offers an additional quest, he wants us to get him his potion. At the beginning you should go for the Orcs in the northern area (16). As these are only a group of four, they are easy prey. Following you can take a rest in that room.

At Ohlo's (3) You should speak with him to finally get the quest to fetch his potion for him (4) (speak, OHLO). The trolls (15) in the south-western corner of the Slums are a hard nut to crack. You should only face them towards the end after you have gained a bit of experience (save beforehand). 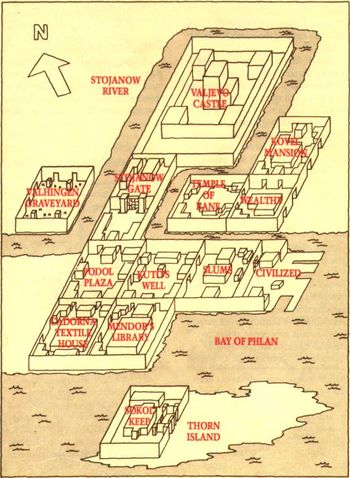 On the Commodore 64 version, if you split one stack of arrows until a player character's inventory is completely full, and continue splitting the same half of the stack until you reach 1 arrow, an item appears in the PC's inventory with the simple name of "Jug". "Jug" is an equipable melee weapon which never misses an attack and can kill virtually any enemy with only one hit. Oddly enough, "Jug" also has a limited number of uses, as if it were a stack of arrows, and then disappears from the character's equipped inventory. You could then split another stack of arrows to make another of "Jug". Discovered by [@Stormbow on Twitter] in 1988.

Zore: "The opener to a successfull series of RPGs as Curse of the Azure Bonds or Secret of the Silver Blades that are based on the same engine. The introduced strategic fighting system was at that time surely one of the highlights. A small drop of bitterness in Pool of Radiance is the numerous loading and the long loading times. 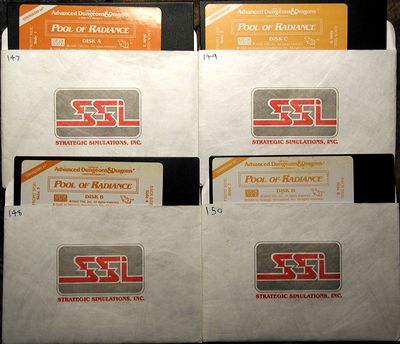