„Metal Warrior“ is an action adventure (where the action part prevails) of a newer date, it was programmed by Lasse Öörni/Cadaver in 1999 and is in the meantime available as download for free. The game is the first part of a quadripartite series. The original game was published for the Amiga in 1993/94, the version for the C64 is so to speak a remake. It takes place in the future where violance rules. The budding e-guitarist Ian tries to solve the murder of a friendly musician. But at the same time he also discovers something much bigger and much worse…

Basically, this game is a shoot'em up in 2D design which scrolls in all eight directions, but with the possibility to choose the levels (by road junctions), with shops and extras as medi-kit, stronger weapons, etc. You can talk to other persons and also solve puzzles. Good graphics, very good and fast animated sprites, great music and sound effects and a well told background story. Additionally there are cut scenes and a very nice end sequence. The highscore list is saved on disk and can be reset. No savegames are possible.

You start at Home (A), and you get credits by shooting the guys on the street. Sometimes they leave credits, a first aid package or weapons.

Ask Faustus (B) for SADOK, he will then tell you something about HITMEN. After that ask Goat (C) for HITMEN and he will tell you that Dethmaster can tell you more about him. The buy an e-guitar for 20 credits at Axes's 'n Amps (F). After questioning Phantasm (E) about SADOK, you can join the band of Faustus in the further course of the game. But before that you need to buy a beer in the bar for 3 credits to talk to Dethmaker about HITMEN there. After that go back to Faustus and ask him if you can join his band (JOINING). A cut scene will follow.

After leaving the club "Hades" (H), you will be attacked. Here it is advisable to use better weapons (e.g. grenades if available). Go to the bar (I), buy a beer and talk to Dethmaker about "ATTACK". He will give you a keycard after the conversation. Then you leave the town (Exit) and you see a ladder to the left. Climb down the ladder and go to the door at the right. Use the door and go further to the right until you reach another door. You can open it with the keycard of Dethmaker. In the following final fight it is very helpful to have a plasma gun.

After you have equipped with good weapons (laser or plasma gun), you leave the town again (Exit) and go to the left. Here lots of hopping pigs are waiting for you and will nibble away at your energy reserves. In any case you should carry with you a few medi-kits. Enter the cave and go all the way to the end, where a door is blocked by the next end boss. When you heave defeated him, Sadok waits at the other end to give you a disk with evidence.

Take the disk to the police (D) right away, and from the policeman you will get a keycard with which you can enter the arsenal of the police and also Area 51, which is your next goal. For this you should really have many weapons at the ready. 99x plasma, 99x laser and 99x grenades are necessary. Two dozen medi-kits are also recommended to make it through. Furthermore you should at least have two extra lives in reserve, or it will get enormously hard. Leave town again (Exit) and go to the right. In front of Area 51 you will be attacked; but the "aliens" are easy to defeat. In Area 51 you have to go many screens to the right first. At the end an end boss that spits fire awaits you. If you stay far enough away, he cannot harm you but you can still hit him, and he should be no problem.

Now go to the laboratory. Here it is really not easy to work your way through to the top without getting hit. Somewhere on the way you get to a point where two spring guns firing very fast block your way at the left and the right. First go to the left, run somehow through the permanent fire and get the flamethrower. Then run to the right, where another weapon lies. Then run through the permanent fire to the middle and through the door. Here waits the final boss. You best bet is to fight him with the flame thrower and the plasma gun, for which you hopefully have still some ammunition left. In a pinch the laser guns or the grenades will do - all other weapons are really only an emergency solution. When the final boss is defeated, the end scene awaits you.

(Sources: Based on solution for first and second part by Martin Brunner, third to fifth part by Benjamin Bahnsen, 27.10.2003, translated by Camailleon).

Benjamin: "Great action game with very good graphics and even better sound. But during all the shooting one easily forgets the gist of the game: the above-average good story. Negative is the complicated change of the weapons, furthermore you also need to have fast eyes in the cut scenes to be able to read everything. No saving is possible, a freeze cartridge is a must-have then. However a very successful game!"

Sledgie: "Very fast action game with adventure elements. For my taste there is too much shooting. Otherwise I like the sound and the game idea very much. Voting 8 out of 10 points."

TheRyk: "No complaints about music and graphics. Everything looks and sounds extremely professional and brilliant. But the game is faaar too easy to my mind. Even in my very first game I scored almost 200,000 and only died because I wanted to with plenty of medical kits and lives left. There are far less professionally made games which can fascinate me much more. I hope, the sequels are a little more challenging. Respectful 6 points for the effort of single-handedly creating this beautiful, but sooner or later a little boring game." 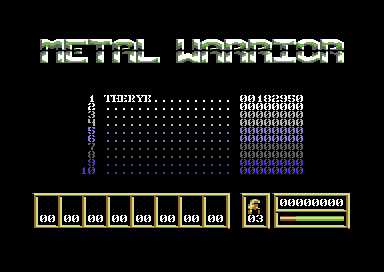