Welcome! Your job is to cross 9 catacombs that lead to Lady Tut's vault. Unfortunately, different beasts have gathered down here and blocked the way by locked doors. These doors can only be opened with keys that you have to collect first. Sometimes you have to open several locks. With such mulitply locked doors the next key only appears after unlocking the current lock, as you can only carry one key at once. To have ammunition for the energy gun, you collect jewel rings. The energy gun itself is - also cloaked in a jewel ring - hidden in one of the higher levels.

Take the game idea of two classic games and add a shot of originality. Shake all this very well and then you get "Lady Tut". A game, which gets a strategic touch by the restriction that you can only shoot to the left/right and you need to use the revolving doors for protection from above and below.

To get to the setup menu, press the SPACE  key or the fire button. Here you can choose wether you want to play with joystick (J ) or keyboard (K ). You can also change the key assignment here.

The character follows the joystick movements.

These are a dangerous place. Unfortunately, you can only use your weapon from the third level onwards (after collecting the 6th ring). Furthemore, it can only shoot to the side and therefore leaves you unprotected to the top and bottom. But to protect these directions you can use the "revolving doors". These doors look like walls with distinctive colour. If you run against them, they will turn, let you through and block the way for your pursuers. Also look for the rings. Each contains some shots (random number for each ring) and a point bonus. When you own enough shots, you can use your weapon. 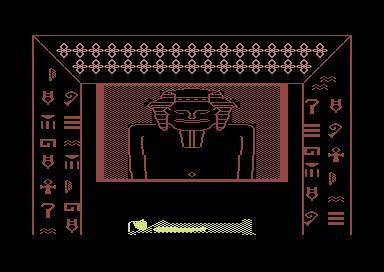 Finally I am at my destination!

Werner: "Lady-Bug is the name of the arcade original version. This game is a real hit on the machine. I cannot get used to this C64 version at all. 6 points."

H.T.W: "This game is a successful combination of "Tutankham" from which the game principle is taken and of "Lady Bug" (Ladybug) from which the revolving doors are taken."

Unfortunately, the player sprite sometimes appears at the wrong position, e.g. on walls or in the middle of the score display. As this bug appears in the version by Bandits as well as in the Cyberpunx version, it is assumed that this is a bug already in the original version and was not fixed in the cracks. 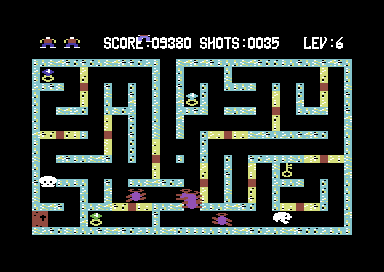 Fatal: The player sprite could shortly walk around in the score display and is now stuck for all times which equals a crash of the game. 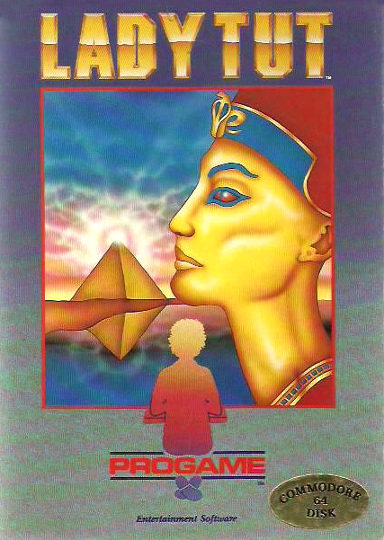 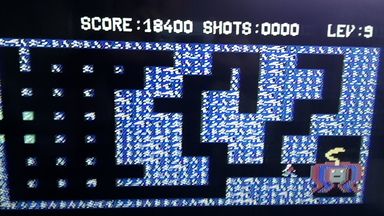