There is war in the Middle East and you are the only pilot at the site. Your task is to defend a desert town, which is being attacked by hordes of helicopters, with the remaining five pursuit planes. The game consists of altogether 16 levels. In the first 5 levels you are attacked by 8 helicopters, later by 12 of them.

Your pursuit plane can crash or get destroyed by the following events:

You get another plane at the start of each 5th level.

Informationen about your equipment:

Your fighter is a VTOL air vehicle ("Vertical Take-Off and Landing"), also named high flyer. Next to flying normally, it is able to also levitate and take off or go down vertically. It can carry up to 100 missiles. These missiles, named shortly AAM, can be used as they are named (Air-To-Air Missiles) and also as Air-To-Ground missiles. Additionally the plane is equipped with a highly developed radar.

There are altogether 8 start ramps, whereby starting and landing always needs to be done vertically. Here you can refuel at any time and replenish the ammunition. This happens at the same time, as long as you are on the platform. The process can be aborted at any time when there is imminent danger. The start ramp consists of 4 elements. If two or more of them are destroyed, it cannot be used any more. They only get destroyed by your own shots, but the transport helicopters are mean enough to place the anti-aircraft cannons and radar jammers preferably right next to the ramps.

The radar works very exactly and is absolutely important in this game. It shows the height and the direction of the hostile helicopters and the position of the start ramps. The vertical middle line corresponds to your position. However, the radar cannot locate any low-flying objects. If the radar screen has become unreadable, you need to find the radar jammer and destroy it.

To the right of the radar the fuel supply (GAS) and the number of missiles left (AAM) is shown. If the fuel gets low, a warning signal will sound. Furthermore, you see the current level (LV) and the hostile helicopters that are still left (HC) until you can get into the next level.

There are three different types of hostile helicopters, they have in common their furtiveness and intelligent flying tactics. They often attack in waves, but never more than four helicopters at the same time.

Animation from the game, Level 1

The numerous objects in the town only serve as a setting, they have no function in the game. The player's fighter is always on the vertical middle line of the screen while the background scrolls to the left and right depending on the flying direction. In contrast to some other h-scrolling games, as e.g. Choplifter, there is no end here, you fly over the landscape continously.

The single flying objects are created plainly. The helicopters and the fighter have only one colour, except for the rotor blades and when changing the flying direction, there is no animation. The explosions are an exception.

The game contains a well-made and fitting title melody, during the game there is no music. In return, the single sound effects are well done. Especially the sound of the sweeping wind, which announces the approach of the helicopters, is helpful.

Image from the game, Level 7

Controls with the joystick

The fighter is steered with the joystick (in the original version in port 1). However, a horizontal change of the direction cannot be done abruptly. If you push the joystick against the flying direction, the fighter will first get slower and then speed up into the opposite direction. So it is also possible to influence the flying speed.

C=  By pressing the Commodore key the game is paused.

Some hints about the tactics: Before shooting the last helicopter and then getting into the next level, you should maybe first destroy any existing anti-aircraft missiles and radar jammers. It is important, that as a last helicopter you do not have a transporter, but a solo or if possible the less dangerous Gunship. It is recommended anyway to shoot the transporter as early as possible. Instead from the top you can also shoot the anti-aircraft cannons and radar jammers also from a horizontal low-altitude flight, this is more effectice and the risk of destroying a start ramp is lower.

There is a series of cracks of Falcon Patrol II, of which some are mentioned shortly here:

AMN / Manik of Amnesia (Commo Bam (CMM))
The version by Manik contains next to the highscore saver also a training mode, in which the following can be set:

Saving the highscore list is done with the key RESTORE.

Sub Zero
In Falcon Patrol is the fuelling process normally drawn-out. At each start of the plane, so e.g. always after a life was lost, the enemies wait until your tank is full anyway. Therefore, in the version from Sub Zero is the first fuelling processe sped up, this saves long waiting times. So this is not a cheat but a small improvement. Furthermore, a highscore saver is built in, the table is saved when pressing the RESTORE key. A short article about the cracker can be found at Zzap64 - Falcon Patrol 2+.

Section 8
In this wide-spread version the following pokes will work:

Hackersoft Crazy Hacks
This version from 3rd May 2012 expands the game with 23 functions. After the start the game is at first as the original version and only by pressing the keys named below, you will activate the corresponding function. So you do not have to decide for a trainer function before the start of the game.

Stefan67: "First of all: The conversion on the ZX Spectrum has some deficits, so that the game has rightly received bad critics there. But the original version on the C64 is one of my favourite games, in contrast to the forerunner Falcon Patrol, with which I cannot do anything. When you got used to the flying properties of the plane, it is easy to steer and also the shooting of the air-to-ground missiles needs a bit of practice, especially as you need to shoot next to the start ramps very targetedly. What I especially like about the game is for once the "intelligence" with which the hostile helicopters act, but also that you need a certain tactic to get as far as possible. The graphics and the sound - except for the title melody - are rather modest but does only slightly diminuish the fun in the game. I recommend the version by Sub Zero."

Robotron2084: "Finally a follower that outplays its forerunner. And this officially! FP2 is a really difficult shooter, which requires cautious manoeuvring and careful sneaking up on the hostile helicopters. The flaks and radar jammers give the game an additional pep. Besides there are ingenious sounds (title melody and engine rumbling) and as already mentioned a hefty difficulty grade. A really great down-to-earth shooter with the perfect balance between frustration and motivation. This is worth 7.5 out of 10 points."

mombasajoe: "With regard to the release year this is in my opinion a very sophisticated shooter with very good playability. It is a pity though that the single levels/attack waves "splatter along" one after the other without being seperated from each other with a message or a screen in between. All in all still "good"." 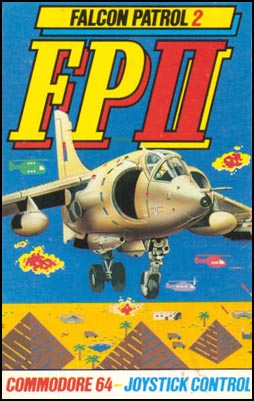 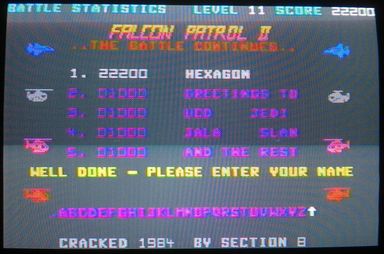