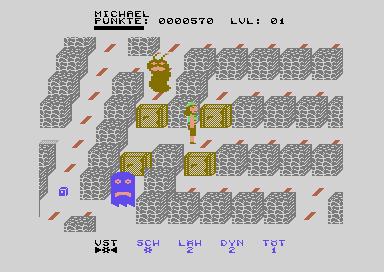 Scene of Dungeon (level 1, as warrior).

The game Dungeon is a kind of Pac-Man clone with RPG influences. You control your character in a maze and have to collect all the points while being chased by monsters. You can choose between two classes (warrior and sorcerer) with different special abilities to fight the monsters. Both classes can be played in male and female versions, which only differs cosmetically.

You always start in the centre of the maze. Optionally, you can have a preview of the maze shown before each level. The game only starts as soon as you move the joystick. There are a total of eight monsters in a maze, but only a maximum of two are active at any given time. The active monsters try to reach the player. If a monster touches the player, you lose life energy. When you have no more life energy, the game is over. Once you have collected all the points (indicated by a change in the colour of the frame), you still have to return to the centre of the maze.

The labyrinth is randomised to a small degree, has teleport fields and doors. The latter can only be used by the player and some monsters (from level 2). In addition, there are always some treasure chests that give a little life energy as well as an ammunition unit for one of the special abilities. Up to 9 ammunition units can be collected per special ability.

After each normal level there is a bonus level where there are no monsters or points. Instead, the five letters B, O, N, U and S are distributed in random places. You have to collect them in this order within a time limit, which gives you lots of extra points. The bonus level is over when all five letters have been collected, a wrong letter has been collected or the time is up.

The maze is several screens large, and it is scrolled accordingly. Above the regular screen area (by using frame sprites) the player's name, points, level and as bars the life energy (or in the bonus level the remaining time) are displayed. Below the regular screen area you can see the selected ability and the corresponding ammunition.

You can choose in the start menu whether the game music or sound effects are played. Unfortunately there is only one piece of music.

In the start menu you can choose the player name (which is recommended because this name is automatically used for the Highscore list). Besides the class and gender (warrior, female warrior, sorcerer, sorceress) you can choose one of three difficulty levels, whether you prefer music or sound effects, as well as whether you want to see a maze preview before each level.

The highscore list is saved on floppy disk and is therefore persistent.

In the start menu, select and choose the settings with the joystick. The game is then started with the space bar .

During the game you can pause at any time with the RUN/STOP  key.

Each class can use five skills. Please note: Most of these skills require ammunition that is limited. The skills are the following:

In total there are eight different types of monsters, of which three types can appear in any dungeon level. The stronger the monster the more life energy the player loses when hit by the monster. Some monster can use doors, some can steal ammunition from the player.

You get points for the following actions:

The abilities to destroy and create wall elements activate when you are in the centre of a field. It is best to press the fire button while moving so that the ability activates automatically when you are in an appropriate spot.

The monsters are quite good at following the player on the shortest path. However, they are often not smart enough if they can only reach the player via a diversion. This should be exploited. Especially the doors are helpful to shake off monsters - but beware: only closed doors are an obstacle for the monsters; if the door opens for the player, the monster can also pass through...

Overall, the difficulty level is quite high. One should not be hesitating to use the class abilities.

There is no known solution!

There are no known cheats.

Michael.Gentner: "Overall I rate my game as decent. It cannot compete with professional products, but for a one man project it isn´t bad neither. Hard to believe that it's already more than 30 years old."

The game contains the only piece of music the author had ever composed.

The ghost monster is of course a reference to Pac-Man.

The sorceress character is based on Jeannie from the TV series I Dream of Jeannie.

The program is included on the following disk image: File:M. Gentner C64 Collection.zip 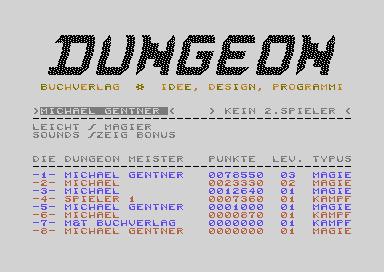