Druid is a computer game that was released by the software company Firebird in 1986. Strictly speaking is the game a clone of the well-known game Gauntlet, which again is an action adventure with a slight pinch of a role play game. The role play game elements are, however, more in the foreground in Druid than in the known original. With the joystick you steer a Druid sprite (named: Hasrinaxx) and with the keyboad you control a Golem. The later can even be played by another person with joystick in port 2. The graphics scroll and show a view from above.

As common at that time, the great hits from the arcade halls influenced the home computer software market to that effect that many clones were brought onto the market in the shadow of the officially licensed arcade machine conversions. They offered the software companies the possibility to earn a disproportionate amount of money in the slipstream of big names and with relatively few costs on marketing and programming. The quality of most of the clones was correspondingly bad.

But not so with Druid, which was in fact oriented on the arcade hall hit "Gauntlet", but could stand for itself by ideas put well into practice. The great strengths of the game were in the appropriate difficulty grade, the use of several role play game elements as spells and healing points and good to very good graphics and sound. The possibility to be able to create a Golem for support and to be able to even control it with a 2nd joystick, was probably the most noticeable and successful element. And finally you could give the hero your personal fighter profile by choosing certain spells, depending on what type of fight (invisibility, chaos, Golem, different forms of energy as fire, water and electricity) one preferred. Equally was it possible to do without some parts of the dungeons - and by this also without some helpful spells, keys and energy - which emphasizes the strategic touch.

Druid was a very popular game, though it did not reach the immense success of e.g. Gauntlet, but its sophisticated and coherent mix of ideas helped it to a solid fan base, so that two sequels followed. Highlighted must also be the title tune of the first part, which due to its catchy composition even today often finds a use in remixes. In contrast to Gauntlet it only had 8 dungeons, but those were thoroughly thought-out and by the compressed content correspondingly challenging but never unfair.

If you open a yellow chest, you have to decide between the offered spells/items.

Which spells are needed?

Notice: If you enter a dungeon for a second time, all doors are closed again. There are places in the game where this does not matter, but at other places this is fatal, so. e.g betweeen level 4 and 5. Therefore you should only "jump between" dungeons, if you are sure to have enough keys.

The spells differ in effectiveness depending on the enemy:

Detailed tips for each level[edit]

Here you also make the trip to the west. To get one level lower you have to go east.

Here you should consider well where you go to as there are hardly any rooms that are completely encircled and where you can hide. So you are permanently exposed to attacks. In the south there is a locked room. If you open it, there is a treasure chest, two pentacles and an alternative path into the dungeon below. However, this leads "only" to the treasures in an area of level 5 where there is no exit to level 6! So after that you need to go back to level 4 and open the doors in the west and northwest again - if you have the keys for this.

The "main quest" here is done fast: if you have charged up above the (regular! - see hint level 4) entrance at the pentacle, you go south and go up again quasi "around the corner" (of course with the help of "Chaos" - so "Pos1" on the PC keyboard) and you are standing in front of the end boss. Tip: If you hurry and plunge into level 6 fast, the effect of the spells still stay for a while which keeps bothersome monsters away.

You'd rather leave as soon as possible but you should try to pick up all Chaos spells that you can get. This means: clench your teeth and explore the dungeon, unless you have already enough Chaos spells.

Chaos spells shoud be preferred to keys here. When leaving this level you only need 2 keys to be able to cope in level 8.

First you should open the door in the east, then the one in the north. There you find further keys. If you cross the bridge you will even find a pentacle. You can happily use up the last invisibility spell, as in the west lingers - as is known - the last of the four end bosses. You can eliminate it exactly as all the others as it is not stronger than the others.

Our Druid would like to be at the lower exit to level 2. At the upper right we see two huge bugs prone to fire (switch between water, fire and electricity with "P") that would mind. The yellow treasure chest at the top left of the gentleman in blue might be the solution to the problem.

"If only I had not taken these stairs...!". If you have not remembered to bring a key, you are snookered here. Slime monsters and small devils do their bad deeds to prevent Hasrinaxx from reaching the next Healing Point. Important: Use also the "+"-key with joystick movements for opening doors, or else it won't work!

Where do I come form, where do I go to? In level three you can see the exit right from the beginning; of course the way there leads through hordes of monsters, energy sucking puddles and - what else - locked doors. But nevertheless: here you can already decide between the shortest and most energy-saving version (about 50% of the dungeon) and the full package with useful spells in untouched treasure chests - if you dare ...

For the first time there is more than one exit here. The choice decides about the further course of the game. Well-known faces from the world of adventures and role play games: skeletons do not like water, the devils are as anachronists against everything with electricity.

Our first encounter with one of the many end bosses: to be able to get past its spitting of fire at all (and by this get close to it), you have to use a Chaos spell. While the effect of the spell lasts, you should quickly try to touch the skull and then (while being in contact with it!) release another Chaos spell. Nice side-effect of the spell: our energy reloads while all enemies disappear. This is of course rather superfluous as, the pentacle as a Healing Point is only waiting to do us good ...

Now it starts to get difficult: on the one hand you run out of keys, on the other the treasure chests that contain them are devilistly well guarded. More and more often different monster types appear at the same time, that is why you are forced to switch the shot type very often (with "P"). Every now and then it is helpful to sneak invisibly past the terrifying pack. By the way: only the black part of the grinning face can be walked safely, walking on the white part subtracts energy.

It is only the ground which is rose-coloured; the prospects however, are rather gloomy. It is no use to moan, because also this skin-scarce guy needs to be expelled from this dimension, this is why again two of the rather rare Chaos spells must be used.

Showdown! The evil guy makes the same mistake that all the evil guys make: it underestimates the good guy. If you managed to get here and you have two Chaos spells left, you can celebrate: the evil is banned from this world and druid blue is the summer's fashion colour.

Klaws: "The only point that I did not like is the missing possibility to save. Instead you can enjoy a diversified game with challenging but well-dosed difficulty grade."

Robotron2084: "A rather easygoing Gauntlet clone with slight role play game elements and a successful two-player mode. As a single player this game is of course a bit more difficult and to find the right key in the heat of the battle is not always easy. For my taste you are also stuck at obstacle a bit too often, the moving space of the character is mostly rather limited, the game area is a bit claustrophobic. However, Druid is a well playable and technically convincing fantasy shooting and above all in pairs a hit. 7 out of 10 points." 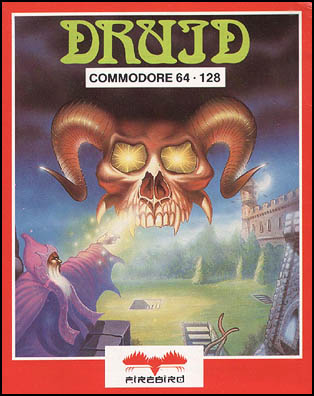 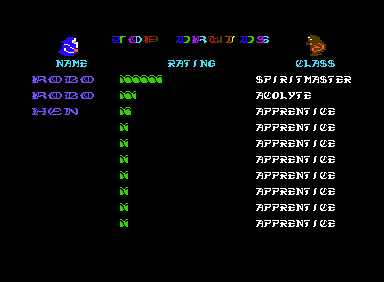