The Double Dragon game series belongs to the most well-known and oldest Beat'em Up games. The first part was at first developed for the arcade machine by Technos Japan Corporation in 1987.

In general it is about beating yourself alone or in pairs through the levels in the role of the twins Billy and Jimmy Lee and at the end rescue a girl named Marian who had been kidnapped by a Street Gang, the Black Warriors. A speciality of the game is, that in the two-player mode you have to fight against each other in the end about who gets the girl.

You fight with fists, legs and with any possible item that is lying around or that you nick from your opponents. With the items you can either hit the enemy (baseball bat, whip) or throw the items at them (knife, barrel, box, rock).

The conversion to the C64 comes across negatively in several aspects. The animation of the sprites is very reduced and between the upper and lower half is a small gap. Music is only available in the title screen, the FX are unworthy of the C64. The enemies have the intelligence of a rock. They do not appear when they should, e.g. Ling does not come through her door and Abbo comes through the wall. Furthermore, they all look the same. Jeff is not there. From the weapons only the baseball bat and the whip are left, which in addition are completely the same. From the special moves the throw was left out. Billy and Jimmy's repertoire is limited to the hairgrab-kick, a punch, a kick and a useless headbutt. The two player mode is there, but the fight about Marian does not take place. Except for the passable background graphics there is not much left from the machine...

Joy right + fire = If you stand very close to an opponent, a "hairgab-kick" is done. A bad punch...

H.T.W: "A bad conversion of the arcade game. Apart from the fact, that the graphics and the movements of the sprites have nothing in common with the original, also all features of the machine were left out. Enemies, weapons, special moves are missing, the end fight in the two player mode is omitted. The sound is below every critic. There is no highscore list, not even an end evaluation. There are better ones for the C64...".

TheRyk: "The music is the only thing I really like. Fighting is damn tough due to the poorly coded controls and the limitation of possible moves. Additionally, the scrolling is halted until you finish an enemy. Due to that, you sometimes have to fight two opponents simultaneously with very limited manoeverability which means you have very little chance of survival, e.g. on the roof in level 2. This is really no good beat'em up game, actually even Target Renegade is more playble. I cannot rate the Mastertronic trash game Double Dragon higher than so-so 4 points, appreciating there is at least a 2 player mode, though it's not significantly better than the solo game." 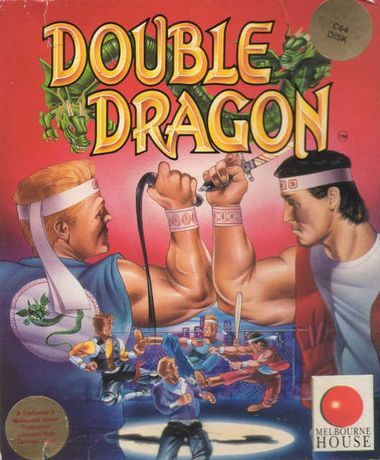 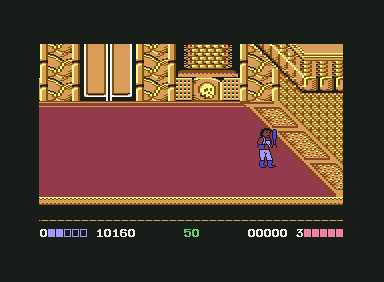 The following titles were released within the Double Dragon series for the C64: