In this game hall classic by Nintendo you play Mario, who worked as a carpenter at the time of the release of the machine (1981) (he became a plumber only in the manual for "Mario Bros"). Donkey Kong has kidnapped your girlfriend Pauline, which he keeps captured on a scaffold. In the first level Donkey Kong throws barrels after you. You need to jump over them or smash them with the famous hammer. Shortly before Mario reaches his girlfriend, Donkey Kong grabs the beloved and climbs upwards with her. In the second part Mario can bring about the monkey's downfall and through this rescue his beloved. The first stage is done!

The game offers 2D single screen, many moving sprites and nice sound effects. In the upper left the number of lives, the current score, and in the upper right the time bonus and below that the current level are shown. 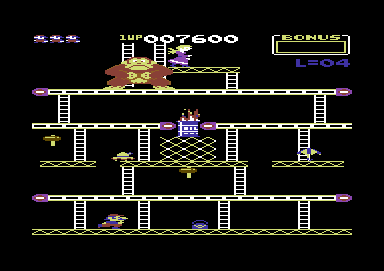 The game is controlled completely by joystick in port 1 of the C64. Left and right makes Mario walk into the corresponding direction. A jump is done by pressing the fire button. If Mario jumps while walking, he can jump further and thus overcome obstables more safely. With a vertical joystic movement Mario can move up or down a ladder.

The hammer automatically goes up and down. It is very effective to destroy everything, but you also lose time (bonus points), as climbing is not possible while beating with the hammer. So only use it in emergencies. The end of the hammer sequence is shwon by a blinking of the hammer.

There are points for the following items and enemies:

The bonus counter goes down by 200 points every 2 seconds. When the bonus is zero the player loses a life.

Start values of the bonus counter:

Different circulating versions are re-cracks of the 1103 version, this can be easily recognised by Pauline calling "1103!" instead of "HELP!". An exception is the version by Mayday, which also offers a saveable highscore list.

Sledgie: "Very good conversion of the game hall classic Donkey Kong. Amongst the other versions of this arcade game, that are available for the C64, is this one by Nintendo in my opinion one of the best."

Robotron2084: "It is kind of strange, that for the C64 there is no really good Donkey Kong! To my taste the graphics are here to much streched horizontally to fit the dimensions of a normal TV, because the machine had an upright screen. Furthermore the collision query is really top-miserable and the game itself is chewy and slow. However, Donkey Kong stays of course grand cult and in the end could Ocean Software not provide anything better with its '86 remake. 6 out of 10 points."

Shakermaker303: "A classic that probably everyone knows. The controls of Mario is so-so and the monkey looks a bit too "apish". If you get the hang of it, it is quite fun to play. I think 8 out of 10 points ok."

pj64: "In the 80's this game would probably have blown kids away with its close reproduction of the classic arcade game's graphics, colors, sounds, and game play. But the character's movement is a bit awkward." 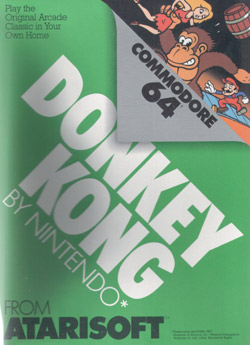 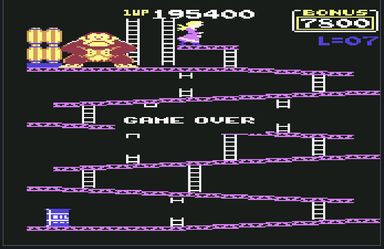