Uuno Turhapuro Muuttaa Maalle is a game based on the movie with the same name. Uuno Turhapuro (Numbskull Emptybrook) is a Finnish comedy character created by Spede Pasanen and played by Vesa-Matti Loiri. In the movie (and the game) Uuno decides to move from the town to the country-side. Game is devoleped by Pasi Hytönen and published by Amersoft. Game is a traditional side-scrolling game where you control Uuno-character through three different levels, trying to avoid different obstructions.

The game is operated by joystick in port 2:

fmatic: "Even Uuno Turhapuro Muuttaa Maalle is a one of the finest finnish made product. Game itself is very, very difficult. Way too difficult. I'm quite sure it's one of the hardest C64 game ever"! 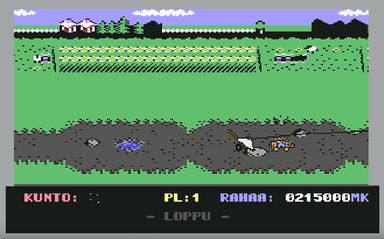