The Tomb of Dracula

It gets night ... the vampires are hungry ... You cannot go back ... Your only chance to survive is in front of you. The door closes behind you and you enter the world of Dracula's grave chamber. You know that you are at the southern door of the first level. The walls are cold and slimy. With every step you could encounter horror figures: ghouls, zombies and blotters full of slime. In your hand you have for the start seven silver stakes for defense...

At the beginning of the adventure you are shown the a map of the first level of Dracula's tomb for a short time. Your aim is to find a way through the chamber to the stairs into the next level to steal the treasure of Dracula in the last level and find the exit into freedom. On the way you can collect further silver stales for your defense.... but beware ... you have only 30 minutes until Dracula awakes and appears.

The meaning of the symbols on the map

The program is written and compiled in BASIC. The following lines are interesting. From line 11400 starts the final evaluation, if you found the way out of the labyrinth. In 7450 the formula for the conditions is written. This line is called up if you reach some stairs. The variable "LV" is the level number.

And what does this tell us? Now, the first part of line 7450 calculates a random number between 1 and 300 and the second part of this line lets you only win, when the random number is smaller that 16 and at least level 8 has been reached. And if you are unlucky, you play until the cows come home...

Sledgie: "It is fun to grope from room to room in the hope to snatch a few stakes and then successfully defeat the monsters. This is nothing for arcade fans and also no real role play. It is simply a funny labyrinth game."

H.T.W: "A really funny little game with nice animations which additionally trains the retentivity. Also the background music is successfully done. What I do not find so good is that if you are unlucky, you will never see the end. To get screenshots for the end animation I have changed the values in line 7450 a bit, I hop you will forgive me ;) ". 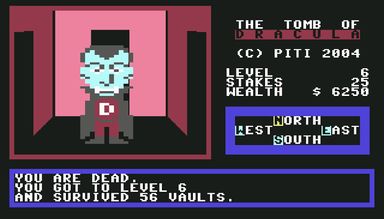