"Steel Thunder" is a simulation of the tanks M60A3, M1A1, M3 and M48A5. Each of the three additional members of the crew of the tank can be chosen anew for each mission. All members have their peculiarities and special amenities. During the mission you can switch between driver, gunner and commander view any time (the assistant gunner is always simulated by the program) and take over the controls yourself or just give commands as commander. After a training operation you go to scenes in Cuba, Syria or Western Germany for combat operations and there you will notice quickly, that one does better not drive directly through the hostile lines, but focus on the aims from afar as well as you can, destroy them and only then proeceed further. The one who sees the other first, is the winner most of the time.


In this simulation there are many keys occupied by important functions, that means that the training period is rather long, but if you do not spare this effort, will have fun for a long time (also due to the career file, which contains the reached rank, the finished missions, the exact breakdown of the shot hostile units and the list of medals of every player and is saved on disk) with this presumably best tank simulation for the C64.

The game abstains from using a background story (with thanks to Accolade given the settings), but it offers four different armoured vehicles: Three battle tanks and one scout tank wait for their use on the battle ground. The player decides before the start of the mission, which vehicle he thinks is the most qualified for the this operation. 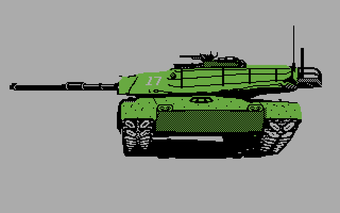 The "Abrams" is realised in the game with the version M1A1 and represents the top class. It has the strongest armour and is powered by a gas turbine instead of a conventional combustion engine, which turns the 60t heavy vehicle into a projectile. The M1 is the tank in the game that shakes a leg fastest. As main arm it carries a 120mm smooth-bore canon, that can shoot a number of different ammunition types. In the game, the tank has a secondary arm with a coaxially MG on a caddy calibre .30 and an additional MG calibre .50. 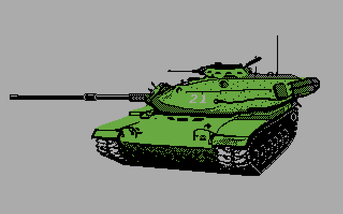 Forerunner of the M1 and long-term standard tank of the USA, in the game named "backbone of the tank force". It is powered by a 750 PS turbodiesel, which speeds the 50t heavy vehicle to about 50km/h. Its armour consists of a 105mm canon. In the game it has also a coaxial MG calibre .30 as well as a MG calibre .50. 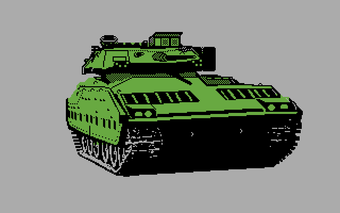 The M3 Bradley cavalry tank is a fast but only slightly armoured scout vehicle, which was developed from the armoured tracked vehicle M2 Bradley. It carries a 25mm Bushmaster machine gun with coaxial MG calibre .30 on a secondary arm. Furthermore, it owns a wheel-away launch container for wire-remote controlled tank defence missile. 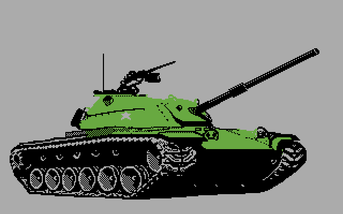 The M48 goes back to 1952 in its original version and had been in service for about 35 years when the game was released, thanks to various measures to raise the combat power. The production of the version A5 started in 1975 and it carries the same 105mm canon as the M60A3. Although it carried only the MG calibre .30 in reality, the game designers treated it also the oligatory MG calibre .50. The tank is a bit slower than the M60 and has less armour, furthermore it has no weapon stabilisation asset as the other vehicles in the game. If anybody finds out how and why this museum piece has made it into the game - let us know.

"Steel Thunder" offers the player several different fireworks, which you can use to fulfill each mission: The tanks have - same as in reality - different types of ammunition. The target decides the choice of weapons. Against infantry you need to use MG and APERS grenades whereas against tanks you need HEAT or APDFS missiles. The M3 also has wire-guided tank defensive missiles that are equipped with a HEAT warhead and whose trajectory can be corrected by the gunner after shooting it.

The following list shows the ammunition types that are used in the game:

To know, what type of ammunition is effective against which aims, look at the following table. The information was taken from the manual.

At the beginning[edit | edit source]

How you start your tank[edit | edit source]

Shoot at the enemy (with computer gunner)[edit | edit source]

Free yourself from a dangerous situation[edit | edit source]

The game is controlled by keyboard and joystick:

2. Destroy an Enemy Mortar Post
Destroy a hostile mortar post. This is a practical mission in which you cannot get harmed. Take a M3 Bradley which is ammunitioned with HE 25mm to provide this position and its crew. But beware, this is a real rats nest. Their 120mm mortars can be dangerous.

3. Stop an Advancing Enemy Patrol
Expected promotion to the rank "Sergeant". Stop an infantry unit, which are on recon-mission behind the lines. These are supported by some BTR-70. Take an M3 Bradley which is ammunitioned with AP 25mm, to tidy up. But don't lose much time.


4. Blow up an Ammunition Dump


8. Save us from Certain Defeat

General Bamse: "For me THE military career simulation. Driving with the M3 Bradley over the map, avoiding contact to the enemy until you reach the primary target, then on the way back killing as many enemies as possible until the TOW missiles are empty. The game does not have many sound effects, but the ones that are there are coherent and bring out the realistic realization. The same can be said for the not spectacular, but functional graphics and the nice rocking effect while driving. With the scenarios and the medal / promotion the game offers enough incentive to keep oneself busy with it. Although the TOW missiles are a bit too powerful (every enemy is destroyed from the fartest distance (= one pixel in the augmentation) with a single shot) the game gets full points from me!"

Ragnarok: "An unbelievably complex and realistic simulation for C64 games, that has been researched meticulously and can easily stand comparison to the port in the PC. The graphics are detailled, the sound atmospheric and the gameplay is easy and comfortable despite the big number of keyboard commands. The choice of the scenarios corresponds to the spirit of the time, same with the presentation as unreflected wargame with a great portion of "hooray-patriotism". If you overlook this point, then Steel Thunder is a solid tank simulation with diversified missions, whose depth fascinates still today. A top title, full points! And now I am busy, there is an armoured supply convoi behind the hostile lines that cries to be annihilated..."

H.T.W: "Rattle there, shoot the target and go... this is the way everybody imagines it to be, if he has never driven such a vehicle himself. But this is not the way and that is shown by this simulation!! Such a tank is rather complex in its technics, needs some training period for its controls and is also very prone to damage at certain points, as e.g. the chains. It is no fun to stand inside your steel box in the middle of the hostile emplacement, a chain has been thrown down and one cannot move any more. The planning of the route is crucial for survival and the single members of the crew need to work perfectly as a team. Concerning the simulation itself and its presentation I can only agree to my previous speakers, although Gunship seems to me yet more sophisticated and closer to reality, as there is no possibility to return to HQ by pressing a button, but one has to fly back again by himself after fulfilling the mission. However: very good!" 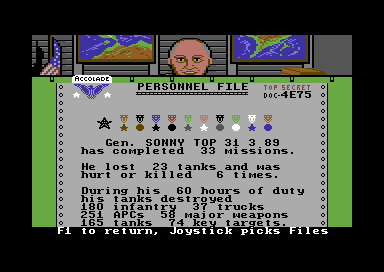