As far back as I can remember, I was born to explore caves. This is probably the same with all cavers. The prickling in the tummy, even already when you see a cleavage in the rock, can be enormous and if you also have the suspicion that maybe, as in this cave, there could be treasures hidden, one cannot hold oneself back any longer.

But be warned, this cave is different from all the others, it has the reputation to devour researchers.

At first, it is so dark that you cannot see your own hand in front of you, and it is hot, because steam is shooting out of every crack in the volcanic rock. This steam cooks you in 10 seconds, then you look like a lobster. And then those bats, really disgusting creatures, they eat you neck and crop and can only be chased away with flares. Then you also need dynamite to bomb away the boulders that block the main shaft again and again. And I tell you, if you do not pay attention, you can sweep yourself away.

That this has happened to many before can be seen by the ropes that hang around everywhere, by the ladders that were attached and the rails. The stuff is helpful until you reach the underground waterfalls. There you need to use a barrel to go on. What a luncay, I tell you!! I will never forget that.

Deep in the main shaft there are artefacts and treasures, but most important are the keys, without them you cannot proceed. If I had found none, it probably would have been better for me...

Then everything happened so fast... I saw the gleam of the fathomless treasure, I had found it, the hidden pyramid!! Then I felt a hit from behind, the ghosts of cavers that have lost their lives here!! This was it, I had no chance any more.

And thus I can only warn you, keep an alert eye and a keen mind, because I am now also down here. For ever!! I am now one of them. And I also wait for only one of your mistakes...

...an animation from the game.

Spelunker can be assigned to the genre of action-adventures, but has also some strategy elements. The graphics which scroll into all directions (the scrolling happens when the border of the screen has been reached) are kept relatively simple due to the early date of creation, in return, the labyrinth is enormously big and the build-up is very well thought through. The sound consists mainly of a series of sounds and FX. Steering the character must be done very exactly and jumps need to be done partially pixel exact.

What parts you and the immeasureable treasures in the deep are traps, barriers, unresting ghosts of the failed cavers and numerous other dangers.

You start with five lives. The caves are composed of six levels. Each of these levels has new and special challenges. After having finished a level, you can expect bonus points and an extra life.

The lift helps you to proceed into the depth. You start the game in the lift. Use the joystick to move the lift up and down. The ropes and ladders that the unlucky cavers have left behind are also helpful here.

Batteries need to be collected to provide energy for your Phantom-Blaster (against ghosts). The charge of the battery is shown at the lower part of the screen. If it reaches zero you will lose a life, so take care of it.

Dynamite can also be collected and is used to bomb away the rocks that block your way. Also the number of dynamites that you carry is shown at the lower part of the screen. Press the key "D" to lay down a bar of dynamite. Put it as close as possible to the rock meant to bomb and make sure to go far away enough from the explosion.

Keys need to be used to open the massive doors that are between the caves. There are two different types of keys that only fit at the corresponding door. The keys that you have picked up are also shown at the lower part of the screen.

On your way you will find different tools and treasures. These can be tools to dig but also antique artefacts or magical dust, which turns to dynamite or a flare. The rarer the found item is, the more points you will get.

Ghosts of failed cavers live in the shafts. They are a deadly peril, but they can be defeated with your Phantom-Blaster. Press the SPACE key to trigger it, but make sure that the ghost is within the weapon's reach. And always have in mind that the weapon takes charge from the battery!

Bats are in many parts of the caves and defend their living space energetically. However, they never leave the darkness and flee from bright light. Here the flares are a help, they can be found and collected. Press the key "F" to fire a flare.

Volcanic cracks with fiery molten rock are everywhere. Steam emerges from them which will cost you a life.

You need the joystick in port#2.
After loading and starting the game, a demo is shown. You can leave it by pressing the fire button.

The pawn follows the joystick movements (only horizontally/vertically, not diagonally).
To make the character jump in walking direction press the fire button.

If you have reached one of the four best scores, you can enter your name into the highscore list. Use the joystick to choose the letters.

H.T.W: "A great Jump 'n' Run with strategic parts for players with much patience, where a hidden "treasure" must be found, which is of course placed at the end of a huge labyrinth, which is divided into six levels. The one who solves the game without a map or cheat mode, can deservedly name oneself a joystick artist . .".

Robotron2084: "Despite the scarce graphics and the sometimes really horribly finicky controls, I like returning to this game. Challenging and motivating, and equipped with a great tune, which creates the perfect atmosphere for the odyssey into the ample cave systems. Here you have to start with utter concentration, otherwise it won't work. 7 out of 10 points."

BiceE: "This is both a super frustrating and super rewarding game. The margin of error is tiny for jumping, climbing ropes and ladders and dodging obstacles, and that annoying ghost always seems to show up at the worst possible time. Plus any progress you make from one game to the next always seems very incremental - you spend half an hour getting to the point where your last game ended, only to run out of lives slightly beyond that point in the next game. But I was addicted to this one back in the 80s and finally played it all the way through to the final treasure. A fun one for patient and persistent players. I'd say 9 out of 10 if you have the patience for it, 6 out of 10 otherwise." 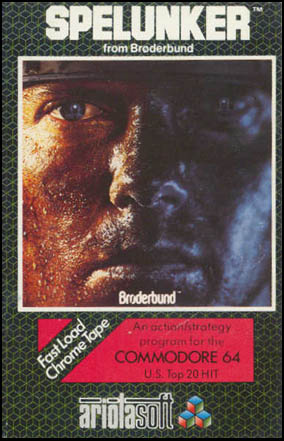 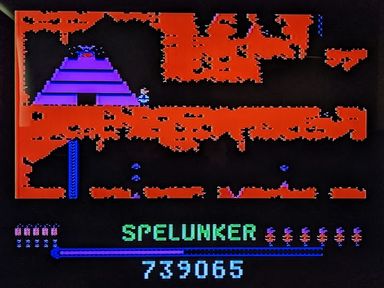