This game is a mixture of action adventure and submersible simulation with additional economy and action elements. As the owner of the "Titanic Salvage Company", explore the Titanic, find interesting items and photograph them, try to present yourself confidently in interviews to not disgruntle your sponsors, sell found items as antiques to get the tills ringing, let information flow because also reporters give gratuities, keep good contact with the media to stay in the minds of the public and never forget: Your aim is to retrieve the Titanic. For this you need to find eight inflatable air bags that were attached at the most important places of the ship and activate them. Your ship for expedition is very well equipped for this mission. It has a modern mini submarine with which you can approach the Titanic and with the help of a grappler combine different items that are then needed to open doors and bypass blockades. You can also use a scanner, photograph striking places for the press (gets you money), set out buoys (to not get lost) and collect items. The expedition ship has also a press room for greetings and interviews, a laboratorium for research, a radio room with satelite TV and a so-called finance room where you can negotiate with the sponsors and also supply the managers of magazines with information. A game for long evenings . . .

Controls and displays of the submersible (T.S.1.)[edit] 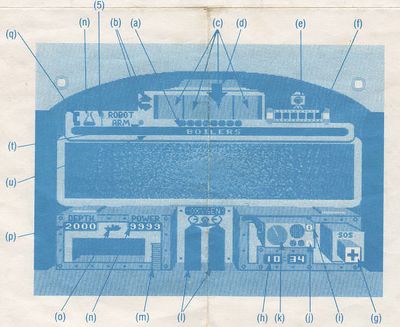 T.S.1. Sonar
This instrument will be very useful for orientation within the Titanic. You own six sonar buoys that you can put into any room. After that you can adjust the sonar to one of these buoys and by this get the direction and relative distance to it. The direction is relative to the orientation of the T.S.1. For this you first need to fine tune the sonar to the corresponding buoy. Press the key "P" when the number of the desired buoy is shown. You also collect a buoy by pressing "P" (depending on its status). The counter in the tuning display shows the number of buoys that were set out. The sonar only works up to a distance of six rooms, if one is further away than that, it will get invisible for the sonar. Buoys that are on another deck than the one where the T.S.1. is currently moving are not shown on the sonar.

Robot arm
The robot arm is your tool to manipulate objects. It is very sensitive, therefore be careful when using it. To extend or retract it, press the key "R". When it is extended, press the "Space" key to open or close the claws. To grab an object, you need to lead the robot arm to it with the claws opened and then close them. As soon as this has happened, the name of the object is shown in the message line. If you want to pick up the object, simply move the T.S.1 or retract the robot arm. Not all objects can be picked up, some are to heavy, others are fixed permanently to the Titanic. When you try to move such an object you will hear a tone. If you try to move such an object more often, you risk to damage the robot arm. To release an object again (open the claws) simply press the "Space" key again. The arm can carry a maximum of two objects.

Timing
This is utterly important in this game. The clock in the game runs approx. 8x faster than the real time. Your working day starts at 10:00 and ends at 18:00 (this is also displayed). At the end of each working day you need to return to the surface and into the expedition ship. Diving down to the Titanic, rising up to the surface, press conferences, financial discussions and repairs need their time. Every two weeks you need to return to the port to get material and to give some free time to your crew. The captain of the expedition ship insists on that. However, your expenses do not get less during this time. No date is given at which the Titanic must be heaved, you have time as long as you do not get broke.

Bamse: "Unusual mix of simulation, mini adventure, a whiff of economic simulation and many "other stuff". Ingenious atmosphere by the really impressiv underwater explorations! A must for mappers...".

H.T.W: "It is unbelievable, but there are again and again real gems to be found in the pool of games for our breadbox, which happened to have been ignored. We have again a game here, that probably everyone started playing, but did not go into very deeply because of the "manual not being enclosed".... The rating by the established magazines at that time were also not overwhelming (they probably did also not have a manual....) However, this is a very interesting economic simulation in a so-called "real time" that requires not only to represent the own project well (the press) but also negotiating with people that want to invest (sponsors). Additionally, you must not forget that the own crew also needs a break and the most important is of course that you explore the "Titanic" (and make money with the items found) and activate all air bags, whereby this part equals an action adventure including a mini submarine simulation. The whole game can only be solved when all particpants are satisfied ...My opinion: This game should be played through by every future "manager" who then can form his own opinion about his abilities! ;)" 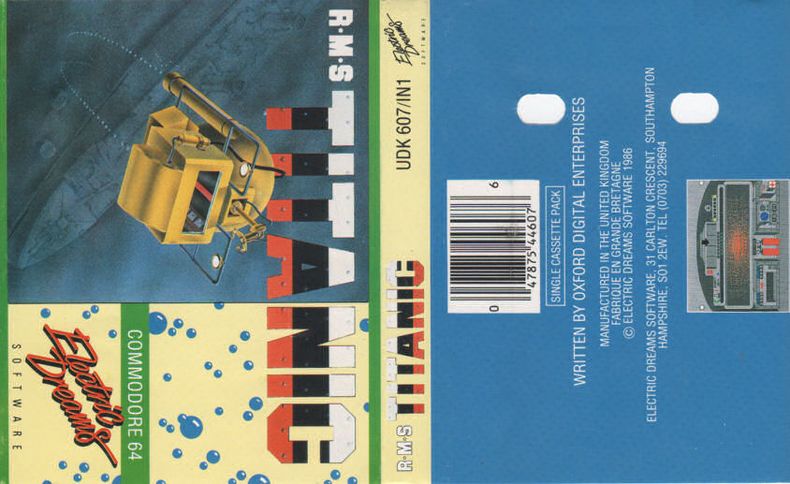 There is no highscore possible in this game.