When David Crane's Pitfall! was released for the Atari VCS at the beginning of 1983, the game attracted the attention of the players not necessarily because of the great graphics (even though the graphics were probably above-average for this time and this console). In fact, Pitfall rose fast to the top of the game hit parades of that time due to its unique level buildup and its features and was because of its success converted to different other consoles and homecomputers (amongst them the C64) in the same year.

While most of the video games at that time only got harder or faster level by level and hardly offered any diversification in the course of the game, Pitfall had 255 different screens with a constant difficulty level, where enemies and perils alternated. There were further significant differences: e.g. when having contact with an enemy in Pitfall you "only" got points subtracted. But when this happend you could not reach the declared main aim, the maximum points, any more. Also you could not only - as usual - walk through the levels from left to right, the other direction was even easier!

Pitfall-Harry (the main character) had the possibility to switch betwen two different planes and survive his adventures there: the normal way on the surface or through an underground tunnel. The difference: if one used the underground way, then two screens were left out per screen change. So a treasure could easily be overlooked and again it would be over with the main aim (full points). There was also a time limit of exactly 20 minutes, which made it impossible to walk through all screens on the surface! Below the surface in return advancing was often averted by walls below the surface. So to get to all the hidden treasures you needed to choose the right combination of both ways.

At play, Pitfall was one of the best jump'n'run games of its time. You had to overcome pit traps and rolling logs with jumps, avoid enemies such as snakes and scorpions, and you could swing on lianas over quicksand or mud. But the player was never allowed to lose sight of the main aim, which was collecting the many different treasures. The graphics and sound did not use the full abilites of the C64 (no scrolling, switching of the screens, very rudimental fx), but one should not forget, that this was a very "early" game for the C64.

You have 20 minutes to finish the game. Pitfall Harry starts with 3 lives. The game ends when the time is over or Harry has lost all his lives.

jump off a liana

climb ladder up / down

jump from crocodile to crocodile

Run/Stop   pause mode on (screen gets black); press again to go on playing

Run/Stop   + Restore   cancel game and start a new one

Camailleon: "Somehow this doesn't seem to be my game, as I have the problem with this version to jump not precise enough. Maybe its just the practice missing. I got to know Pitfall on a PC - as Pifall II for Windows. The funny thing about it was, that the 8-bit version was integrated into it. Over a bonus level you got from the Windows 3D version into this one and you could spend the full 20 minutes or 3 lives in the 8-bit world." 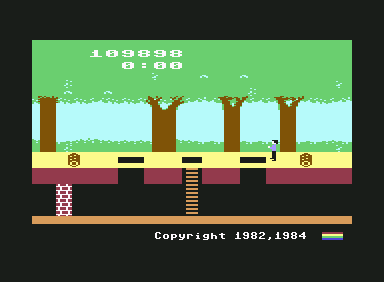