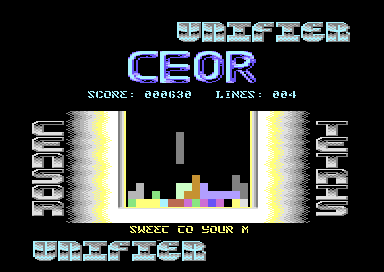 A lot of movement on the screen at Mega Tetris II

Mega Tetris 2 also known as Censor Tetris is a Tetris clone by the demo group Censor Design. The game has some blocks that are not typical for the original Tetris. The comparatively small screen size makes it a more challenging version of Tetris. The game was never sold commercially, but only spread within the demo scene. It first appeared as a playable section within their demo Wonderland 6 and was later released as a separate game.

The game has the block graphics typical of the genre, framed by a logo of the Censor Design group, two logos of the programmer's pseudonym (Unifier) and a scrolling text. The atypical screen layout, which leaves relatively little space for the actual game, results from the fact that it was primarily intended as part of the Wonderland 6 demo. As a side effect of this, the game is a comparatively challenging Tetris. A block in the shape of a C, as well as a small 1x1 block, are among the game's distinctive features.

The game uses a piece of music by Kenneth Mutka (aka Slaygon) that contains some funky breaks. The piece of music was first used in the Wonderland 6 demo. It was composed on the Groovy Bits Player and is 2:50 min long. [1].

There is no known solution!

Zore64: ""Although programmed "only" as a tongue-in-cheek part of a demo, this Tetris clone developed a remarkable momentum of its own and beats many commercial releases in terms of gameplay. It is one of my favourite versions of Tetris on the C64 due to the difficulty level, which is quite challenging from the start."" 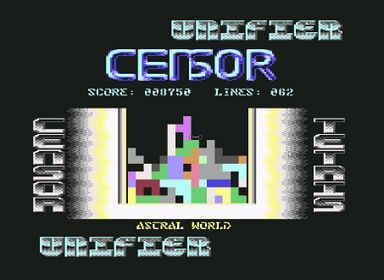