Joseph J. Gunn (shortly Joe Gunn), most important archeologist, makes the discovery of his life after a search full of privation in the vast infinity of the Egyptian desert. A forgotten pyramid. This could be the long lost tomb of the "Crocodile King"! Gunn remembered that yonder had been mentioned in connection with Anubis, a ban and a seal, however nothing can be found about him in the history books due to mysterious reasons. The wind blows stronger and changes to a storm, a sand storm will soon be coming and Gunn willy-nilly will have to try to enter the pyramid. As he is standing in front of the entrance he sees a skeleton in a pit holding a scarabaeus, which he takes. It fits exactly into the opening in the wall. The entrance opens... and for Joseph J. Gunn a long and dangerous travel through this mysterious pyramid begins...

Control is done by joystick in port 2:

Items and their meaning[edit | edit source]

(Valid for all versions of "Joe Gunn") 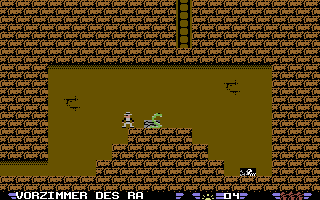 From the version Joe Gunn Gold (27-8-2007), the game contains a trainer for unlimited lives, which can be activated in the title screen with F1.

Logan: "The retro graphics and the tricky puzzles make it - in my opinion - the Game of the year 2007. And with the Gold Edition Endurion has topped it again. High-class game. 10 out of 10 points."

Robotron2084: "A really outstanding, professionally accomplished game, where every player inevitably mutates into a wannabe archaeologist. Excellent cleverly devised puzzles and lots of meanness make Joe Gunn a real arcade adventure hit. And the title hero is a popular figure anyway. More of this soon, please! 8.5 out of 10 points."

H.T.W: "An action adventure" (with emphasis on adventure) which fascinates one amazingly fast. The many puzzles, which never get unfair as you get enough hints on the stone plates, provide you with many hours of fun and the controls are easy but surprise with special moves, as e.g. moving along at the ceiling, in the later course of the game. The many switches and other possibilites which change the buildup of some rooms and thus enable you to go on are close to ingenious. That the whole game is embedded into a plot (the renewing of the seals, the following "end fight" and the flight from the pyramid) is sort of the cherry on the cake. I also like the graphics and the background music, especially the animation of Joe Gunn is more than successful. Conclusion: For me a game with a quality above average that I can recommend to everyone. Now I just want to know if this new item that Joe Gunn has found in his Gold Edition is really a rotor, this could make up associations...

Currently, there are three different versions 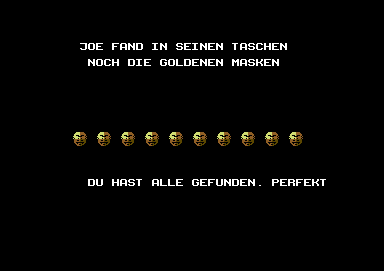