A long time ago a demon named Warlord Gothar ruled over the Darklands. In the middle of this realm of the evil there was a peaceful kingdom, which was protected by a mystic skull, and where friendly creatures named Blizzies lived. But now Gothar has stolen this skull and not only that, but also the love of Jim Slim's life, the charming Candy, has been abducted and captured. So he sets off to free the skull and Candy from the clutch of Gothar and so save the kingdom from sinking into darkness. On his travel, Jim (who resembles a friendly ball, can roll and jump and collect items) will pass through dangerous woods and caves and defend himself against the backers of Gothar. You need to solve 15 different levels with each 3 levels (so 45 levels altogether) before Jim Slim has finished his task. To successfully solve a level Jim "only" has to get from the starting field "GO" to the end field "OK".

The background story is told in the intro at the start of the game (can be aborted with the space key). Each of the 15 worlds has its own monsters, very well-made background graphics scrolling into all directions and music, and after playing through it can be called up again by entering a password. The controls are easy to learn and direct. The highscore list containing 15 entries is saved on disk. The professionally designed box with nice cover contains the game disk, a manual in German and English and a protovision demo disk.

After the intro, you see the menu, the objects to collect, the credits and the highscore list in turns.
F1 - start game, F3 - enter password, F5 - music on/off, F7 - sound on/off


At the upper rim of the screen the following items are shown (from left to right): 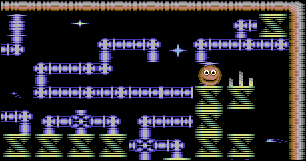 Level 13, you cannot go through the spikes, the right way is on the top...

With a password you get to the beginning of one of the 15 worlds.

H.T.W: "A very nice cuddly puzzle game with multicoloured softly scrolling graphics, great music and although the level size is not that big, you need a lot of skill an remembrance ability in the later levels, due to the level build-up, the extras, the skillfully placed enemies and the path connections as movable platforms, tubes and transmitters. There is a highscore list which is saved on disk, levels can be selected by a password, loading times are - depending on the medium - short or not at all there and the game supports 1541/70/71/81, FD2000/4000, CMD HD and REU (if you play over REU the highscore list is nevertheless saved on disk). Additionally the diskbox is designed with great attention to detail and the handling from order over shipping to the arrival at your home is trouble-free and fast. Again, a nice piece of software which is (in my opinion) more than worth its price, will occupy me for long hours and nights and which I can clearly recommend. My vote: very good!".

Camailleon: "Very interesting version of a jump'n run, with very nice graphics and for me until now unique moves. The grinning of Jim after reaching the "OK" field is very cute. Sound effects fit very well. The difficulty grade is well-balanced, the motivation is kept alive and - I fully agree with H.T.W - one can spend hours with this game. The 45 levels still have some things to be revealed, I am anxious for nice backgrounds, enemies and puzzles. In any case I do not regret the purchase of this game. A small minus is, that one may have a C64 which does not support AGSP-scrolling. However: Very recommendable!" 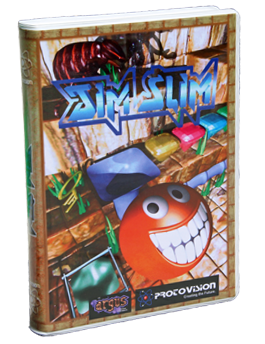 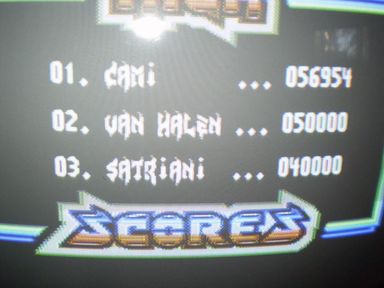