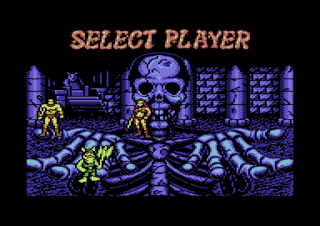 The choice of characters...

The mighty tyrant Death Adder has raided the land Yuria with his troups and reduced it to ashes. The population was almost completely killed or enslaved. The king and his daughter were abducted and emprisoned by Death Adder, the holy relic, the "Golden Axe", was robbed from him.
Three brave warriors are now ready to stand up to the tyrant and to free the land...

The hero or the heroine need to beat Death Adders troups and advance to his fortress. There, they need to defeat him, free the king and his daugher and reconquer the Golden Axe... 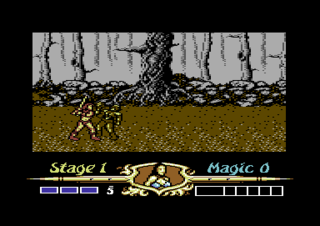 Golden Axe is a classic side-scrolling beat'em up in a gloomy fantasy atmosphere. The coin-op board was converted for a number of different systems. Unfortunately, there is no 2-player snychrone mode on the C64 and they also had to cut back on the graphics. Next to the enemies, there are also every now and then small goblins from which you can take magical pots and healing potions. The annoying tots preferrable appear at night and try to steal the players' supply. The magic from the magical pots can be collected and then activated.
The player has three continues after he has drawn his last virtual breath, Golden Axe is after all a conversion of an arcade machine.
The barbarian's name is Ax Battler in other conversions, on the C64 he is named Axe Battler. This seems a bit paradox, because he fights with a two-hand sword. Also the golden axe, that the dwarf warrior uses as a weapon, can be a bit irritating, as it has - according to the story line - only in the arcade version and a few other conversions something to do with the name-giving Golden Axe.

Partially it is not possible to proceed further before all enemies on the screen are destroyed. A sword with the word "Go!" flashes, as soon as scrolling is possible again. 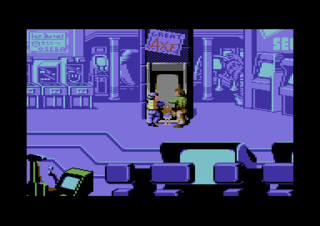 ASM February 1991 (Graphics: 7/12 Sound: 8/12 Vote: 6/12): "From Japan, fresh to the German table is SEGAs arcade hit Golden Axe. Death Adder - whoever that might be - has nicked the king and his daugther and the Golden Sword, and you have to reconquer all that to end the game successfully. The whole stretches about five single stage as typical for an arcade game and is limited to stupefying bashing and cutting. There would of course be nothing to say against that if the possibilites and features that are important for that game were ok. But that is not what they are and that is the dilemma. On the Amiga the controls are totally bang out of order, on the C64 on the other hand, they are acceptable. But here the graphics leave a lot to be desired. So e.g. the dragon on which you ride through the landscape looks less a fire-breathing monster than a kangaroo. So each version has its weaknesses. But by this the mark is missed, because a game thin on plot as Golden Axe should be at least technically faultless. For 50 or respectively 90 marks you will get something far better for your money. You should realize this before you dig deep into your pocket!" (original comment in German by Bernd Zimmermann)

64'er May 1991 (Graphics: 8/10 Sound: 7/10 Vote: 7/10): "This action adventure is a rather nice bashing on the screen, in which you - as often - have to risk your life, to put a stop to the villain's game and for this gain the highest highscore honour. The game characters are designed in 3D and feature a realistic animation and funny sprites. You get used to the unusual colour combinations of the game quite fast. Music and sound are adapted to the game's flair and are likeable. The controls need a bit getting used to, but are quite good. A joystick fight with axe and broad sword is lined up and if you are keen on a solid bashing on the screen, you should try this game. Fighting ho!" (original comment in German by Jörn-Erik Burkert)

Shmendric: "Unfortunately a mucked up conversion. I have played through Golden Axe on the PC several times in the old days, it had the best graphics and acceptable controls despite using the keyboard. The sound, however, was awful. But I had no fun at all on the C64.."

H.T.W: "Normally, such bashing games cannot enthuse me (and this one cannot either), but the controls are exact and by the possibility to mount a "pseudo horse" (why does this remind me of the dinosaur race of the Caveman Ugh-Lympics) and use its abilities and by the fact that the given number of hits until death and the type of attack pattern of each enemy stay the same, facilitates the game. Summary: It cannot match with the arcade machine concerning graphics and fun in the 2-player mode, but it is one of the better conversions.

None of the arcade conversions were really to the liking. The controls on the Amiga were seen as an unprecise gamble, on the Master System the resources did not allow a 2-player mode and the background graphics caused a quiz game. On the PC were graphics and technical converson blameless, but no sound card or joysticks were supported. The 8-bit systems displayed in general significantly less sprites at the same time on the screen. The Mega Drive version was indexed until 2006, then it received an age rating of 6 years. In some versions splattering blood and village inhabitants that are harassed by soldiers were removed. Partially the background story of the game varies. So partially, Gilius is the "carrier of the Golden Axe", partially was the name-giving axe also robbed by Darth Adder. In some versions, Gilius has an axe of steel in his hands.

In this longplay the merciless battle rages...