Easy Script was developed by Simon Tranmer from Precision Software Limited and sold by Commodore. Easy Script is one of the most powerful word processors available for any microcomputer. It allows you to create, store and modify text easily. This makes Easy Script ideal for writing reports, letters, books, memos, bulletins, in fact any type of document. The text can be stored on diskette or cassette so that it can be printed or modified as required"[1]

Easy Script was sold alone or in bundles.

The following software enhanced Easy Script and made working with the software easier and more productive: 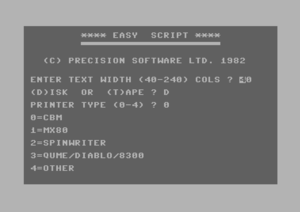 After loading and starting of Easy Script, the start screen appears in grey colors. Firstly you must select following options:

After selecting all options Easy Script starts and is ready with the text editor mode for editing, changing or saving text documents.