A word processor is an application for writing and editing natural-language text. This application has more features and functions than a text editor. The advantage of a word processor is the easy and comfortable handling of long text; formatting the font in style (e.g. bold, underlined, cursive), size (in points (pt) or pixel) and type; and sometimes adding pictures in the document. The formatting text is also printed as it shown on the screen.

Modern word processors may also integrate a macro function for text snippets, a WYSIWYG (what you see is what you get) screen, or a spell check, which features can also be bought as a plug-in or seperate program routine on extra floppy disks in the earlier years of word processing.

In older word processors the number of written chars is limited, because the RAM in old computer systems is also limited! This is also one of the reasons to publish some word processors on cartridges.

The modern word processors also often integrated into an office system (software suite). The benefit of this is that the data can be easily transferred between the applications of the office system, e.g. the address can be also copied and input into a data base for printing serial letters, and diagrams and data tables can be inserted from a spreadsheet program into the word processor.

The text mode of 40×25 has the disadvantage, that a C64 may only show a half of an A4 page. That was a reason to sell cartridges for a 80-char-mode for the C64. In computer systems with the OS CP/M, the standard text mode is 80×25 chars. 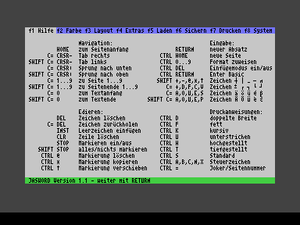 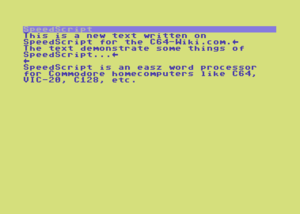