Timeworks Word Writer is a word processing utility for computers including the Commodore 64 and 128. The software was originally developed in the early to middle 1980s. Development started in 1983 and there were several upgrades; up to version 6 in 1991.

The later versions have build-in interfaces to Timeworks SwiftCalc spreadsheets and the Timeworks Data Manager desktop database. Taken together, the three programs are also called the Timeworks Office.

The program runs in 40 column mode on the Commodore 64 and 80 column mode for the 128. To achieve the necessary space for editing documents the program horizontally scrolls the screen. This is quite cumbersome, especially to today's standards. However, scrolling was an innovative solution used to overcome the 40 column limitation.

Refer to the pictures for a more detailed overview of features made available. 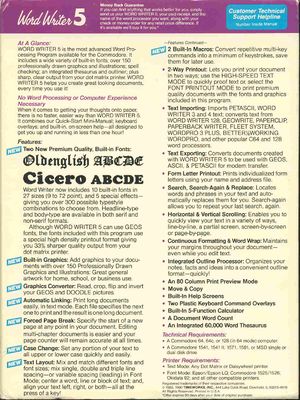