You -as a knight, equipped with the flying horse Pegasus- were assigned the task to show the local dragon its limits, which took the liberty of burning half of the country to ashes. This evil beast resides in the centre of a mountain, which was equipped fortress-like and is guarded by its helpers. To fulfill your mission, you need to pass some tests.

First you need to get into the mountain. The entrances are blocked by big birds, which first need to be roused. (As soon as a bird changes its colour to red, it needs to be touched from above by the hooves of Pegasus). After you roused all the birds, a lance appears in your hands. Use it to kill all birds in the given time. After that you get into the mountain and to the second section of your mission.

You need to get through the tunnel to the centre of the mountain into the dragon's lair. On your way you will meet different monsters and traps. Attention: Only bats can be killed, every other fiend or item need to be avoided. Again you have only limited time to reach the Golden Door and with this the third section.

You have now entered the dragon's lair and you see the dragon which is still protected by its egg-shaped shield. This shield receives its energy from the flying red bats. Every time you kill a red bat, a part of the shield gets feeble and red. As soon as the whole egg-shaped formation is red, it collapses and the dragon is unprotected. This gets you to the last part.

To kill the dragon, you need to hit it with the lance four times. With every hit it changes its colour. After the fourth hit... Just at the moment you want to celebrate your heroic victory, you recognize with horror, that an even more evil relative of this beast was hidden in this lair. So you turn tail and run, oil your armour at the entrance of the mountain and get prepared for the next heroic deed...

Pegasus and the enemies are suitably animted, the knight, unfortunately, only sits stiffly on his horse with his lance. The different levels use many colours, when fighting against the dragon it changes the colour several times while at every hit the background flashes. Other enemies also glow after a hit and then vanish into thin air. During the travel to the dragon cave a background music is played, for hits and the wing beats of Pegasus there are adequate sound effects.

After every successful round a funny sequence is shown...

RESTORE  = cancels the current game, you are back to the title screen

H.T.W: "Although the game does not exhibit filed graphics and pompous sound -due to its year of origin- it leaves a good impression due to its unusual controls (flapping wings with fire button) and the lovingly designed, funny sequences." 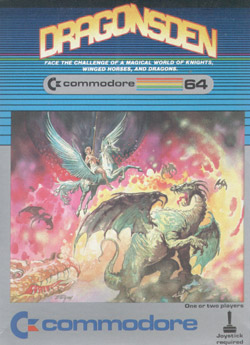 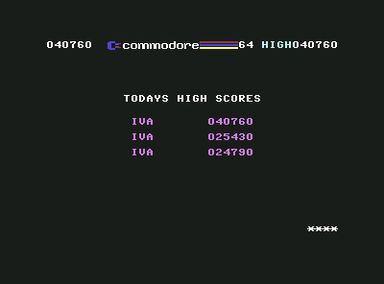