Doriath is an arcade adventure game which is quite interesting to explore.

Text from the back cover of the game:[1]
It was Atelan, Lord of time who loved Fianna so much he bestowed upon her the Coronet of Arien, which gives immortality. Fianna loved him not and Atelan’s rage was so great he cast the Coronet into the Deeps of Doriath protected by his terrible powers.

Many centuries passed. Elidaan the Loremaster found the scroll of Fianna and read the ancient writings. Great powers had he but the Coronet represented the most coveted promise – immortality.

The game is composed of a matrix of 16 x 16 screens. Horizontally they're numbered, and vertically they've a name whose first letter is A to P ("Hall X of Y's deep").

The different vertical levels are named:

The controls are a bit uncommon. You can use the joystick in port 2 to move Elidaan the Loremaster left and right, and also up and down if he happens to be on a ladder or rope.

If you press the joystick button while moving left or right, Elidaan will "float" (it's not really jumping) a short distance in that direction. The distance is normally what's required to cross a normal size pit on screen.

If you press the joystick button while pulling the joystick down, AND you've an amulet selected (more on this below), the spell related to that amulet will appear on top of Elidaan's head, and you can move it around while you keep the button down. During that time Elidaan is focussed on controlling the spell so he cannot move. The idea is to position the spell on top of a monster which can be killed by it (more on this below) and release the button, killing the monster.

While lurking around you'll find several items, which will be reflected on the top of the screen:

The way to use these items is by pressing F1 to select which one you want to use, then F7 to actually use it.

You can press 'S' to see the scroll fragments you've collected so far.

MAP the dungeon as you move around, or enjoy a map I made around 2004, which can be found on The C64 Adventure Game Solutions and Walkthrough Site.

You do NOT need to visit the right side of the map behind the hunchbacks, there is nothing strictly required to finish the game in there.

You've to move around the dungeon, mapping, killing the monsters and surviving, until you get all the Scroll Fragments and 100% Wisdom, then run INTO the Ice Dragon at room P1.

If you try to exit the room, you die.

If you get the chest at P1, you're trapped forever (you wanted immortality, didn't you?).

Not a nice ending, isn't it?

The Quasilin amulet is not there. Full stop.

You can get it (if you want) putting $01 in memory location $036d with you favorite machine code monitor, and of course it is useful to kill the hunchbacks.

All amulets (set the location to $01 to get the amulet):

So by changing the STA instruction to LDA, the result of the substraction is never stored and stamina never decreases:

It must be noted that the above forbids Elidaan from dying, and dying is required at the end of the game, so the change can be reverted (once the game is almost complete) with:

You get goods by setting the desired value at the following locations:

Wisdom is stored at:

Finally, the count of scroll fragments (0 to 8) is stored here:

In the CSDb there are Cracks with trainer functions. 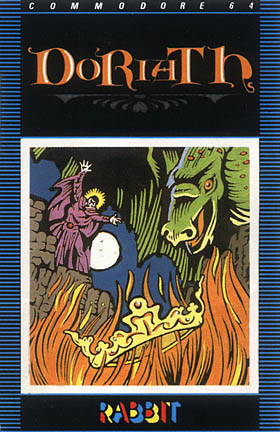 There is no score and no high score list.