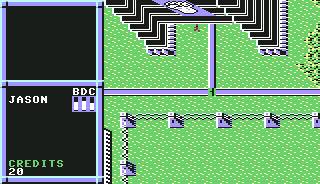 The start in the citadel

In the far away future, the year 3028, fierce wars rage in the universe. The five big dynasties are partially allied, but most of the time they fight each other to the finish. The by far most important weapon in the wars in these times is the so-called Mech, a huge, heavily-armed machine operated by humans. The brave pilots carry out the fights daily at land, in the water, in the air and in space with Mechs of different types.
One of the groups, the Lyran Commonwealth is ruled by the powerful dynasty Steiner. This organization of states is defensively oriented concerning the military, the official language is German (but the game is in English) and the current matriarch is Katrina Steiner. Due to the forthcoming marriage of the daughter, Melissa Steiner, with the partriarch Hanse Davion, ruler of the federation "Federated Suns", a league is in the process of being created, which is supposedly going to make Steiner practically unattackable. This is good news for the inhabitants, because the threat from hostile dynasties, especially the Kurita and their Draconis combine, is big.
In this role play game you take the role of Jason Youngblood, in his capacity of cadett, in a training centre for Mech warriors. The hero of the game is also the son of Jeremiah Youngblood, the security boss of the Steiners, one of the best Mech warriors of all times.
The game starts on the verge of Jason's first practical training in a Battle-Mech. The training centre resembles a small town with accomodations, Mech workshop, hospital, weapon and armour shops and even a stock market.
Here, Jason can raise his abilites in the skills of bows and bladed weapons, pistols, guns, medicine and technique, and of course also his abilities as Mech pilot and fighter.

When his training is finally complete, he will be sent to missions in the combat zone. Depending on his success he will of course rise in the military ranks. If you make it to survive some fights, then you can even request for a holiday on a wonderful recreation planet.
Such nice things are described in the enclosed manual.
But things are going to go a bit differently...

After a surprise attack from the hostile Kuritans the training centre is reduced to ashes. The half-trained Jason is on his own terms. There is nothing left for him to do than to explore the surroundings and search for the Starport, the next biggest city.
On the way there you are often attacked by Kuritan soldiers and Mechs, you can fight against them or flee. After arriving in the Starport you will notice very quickly that here also danger is everywhere, Jason is still wearing his cadett uniform and it is teeming with enemies.
After getting new, civil clothes you can start to pound the hospitals to find injured friends. You will find a good friend of the famous father rather quickly, Rex Pearce.
Now it can really start. With this brave Mech pilot at your side, you search for further crew members, because you cannot do the Kuritan reign of terror in on your own. When your team is complete, you will soon meet Dr. Edward Tellhim, a known Mech engineer. He gives you a hint to a secret hideout, from which you will be able to start a counterstrike... 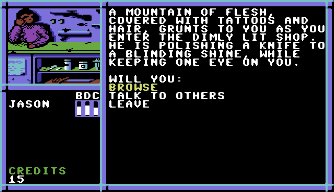 Everything is here, from knife to flamethrower, happiness ensues!

The game graphics are kept functional. The bird's view is useful and also indicates that BattleTech is based on a tabletop game.
Some game scenes, especially during the fights are shown with animations. These are kept in the Manga style.
The title screen is accompanied by music. In the game itself music would be disturbing, there are only sound effects. The fights are turn-based. You enter movements (go, walk, jump) and choose a target for the weapons. Then Jason's team and their enemies swap shots.
This is done until one side is eliminated or has fled.
It is disadvised to use the automatic fight mode, in which the computer calculates your actions. Both in the C64 and in the PC and Amiga version is the suggested tactic not the best. When you are far superior, however, you can by this extremely shorten the partially rather time-consuming fights.
There are some variables in the game: 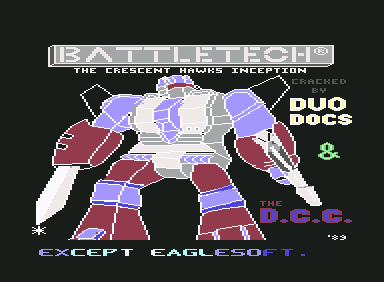 The values given here are taken from the game (C64 version) and differ from the board game rules, on which it is based.

The modification of Commando and Stinger

There are a lot of further weapons contained in the programme code. With the help of a hex editor you can also experiment with them.

In armour and weapon shops you can prepare yourself for the imminent dangers. Further equipment can be found in electronic markets or hospitals.

Skills
Depending on how good a character masters a skill, he has a classification as "unskilled", "amateur", "average", "good" or "exellent".

Attributes
The attributes reflect the physical and mental basic values of the different characters. They are fixed and given and cannot be raised in the course of the game.

There are already many tips in the section "Hints". There is a complete walkthrough at: C64Games.de - Game No. 2184 : Here is a quick walkthrough:

When you have opened all doors, you should first search the Mech of Jason's father, which is hidden in a secret passage. Then go through door 10 and search the Cache, which lies in the back corner. Now go through door 8 and at the back where the computers are activate the power supply for the Hyperpulse Generator. Now walk back and through door 11 into the Map Room. There, the following planets are clicked, that are needed as a password for the door: PESHT, BENJAMIN, SKYE, SUMMER, RYERSON, KATHIL and ACHERNAR.

The ending leaves open many questions, but there are clear hints to a planned sequel. It was released under the name "BattleTech - The Crescent Hawks Revenge". The role play elements were cancelled in favour of significantly improved strategy elements. There is no C64 conversions.

Power Play August 1989 (59%): "The oversized battle robots Battle Mech have now fought their way over the PC and Amiga to the C64. The mediocre role play game debut by the company Infocom does not cut a bad figure on the C64. The graphics are not bad and the sound is appropriate. Nothing was changed in the game principle. So it is all average and lengthy role play game fun. Only recommended to absolute Infocom fans." (original German comment by Michael Hengst)

ASM September 1989 (Graphics: 5/12 Sound: 0/12 Vote: 6/12): "The C64 conversion of BattleTech turned out to be weak. The programmers who have "transferred" the game for Infocom, could not truly deal with the demands that were made relating to the abilities of the small Commodore. At first, the loading times strike. I could not find a speeder. With a slightly clouded eye you can look at the title screen a short time later - you believe to see a silver lining at the horizon. But while you look so intensively, you'd better block your ears, as the music is really horrible. So you go on loading. But if you still managed to have a type of anticipation for the programme, you will get long faces again in the game itself. The quality of the graphics has declined heavily. If you enter a building with the black/white flashing, character-sized pawn, the floppy starts another marathon. I'm sorry but, BATTLETECH on the C64 should really be bought only by true enthusiasts who are enthused by the "Mech idea" so much that they drop everything for it." (original German comment by Ulrich Mühl)

Shmendric: "Too many and too easy fights, moderate graphics and they could have made much more role play game plot from the (very good) story. Additionally, there could have been less encounters with hostile Mechs and in return strategically challenging fights and more different Mechs, then the game would have been absolutely perfect. Despite these deficits: I am an absolute fan of theses games, the mixture of strategy and role play game meets my taste."

H.T.W: "At first sight, this looks - with the blocky graphics and the jittery scrolling - like a rather loveless conversion of the 16 bit versions, but due to the relatively good story and the (unfortunately to few) interesting quest it gets a good game for people who like this genre."

The special editions of the game contained a model of a Phoenix Hawk LAM, which was suited for the BattleTech Table Top Game. The miniture was a special edition and not available in the regular shops. In collector's circles the model is officially named "Infocom Special" Crescent Hawks promotional Phoenix Hawk LAM.. It is a sought-after rarity.

Comparison with other conversions[edit | edit source]

The versions for Atari ST, Amiga, and MS-DOS (VGA/MCGA) only differ slightly from the one on the C64 concerning the quality of the graphics but are of course high-grade. The Apple II by far brings up the rear in this comparison. On the PC no sound cards are supported, the SFXs were realised for the internal speaker poorly rather than well. Due to the long loading times, this conversion is - especially when installing on a hard drive - of course the best. The PC only supports the keyboard in this game, on the Amiga you can also steer with mouse or joystick.


The course of the game is identical between the Commodore Amiga and MS-DOS-PC version, but there are differences compared to the C64 version, amongst others:

The label of a BattleTech disk (PC version).

There is no score and no end evaluation.